Freshmen Shadrick Byrd and Samson Evans have a thankless job in practice this week. Also, one key Hawkeye is set to return against the Badgers.

Iowa safety Jack Koerner is getting comfortable with the physical style of play in the Big Ten. He's about to get his biggest test, and he embraces it Hawk Central

IOWA CITY, Ia. — Two weeks ago, a physical practice tone led to a defensive demolition at Northwestern. After that 20-0 victory, Iowa players pointed to the practice tempo that spilled into the game.

So, why not keep up the pounding?

The 18th-ranked Hawkeyes are continuing to hit hard in practices, even as bodies get more banged-up and the games get bigger. Saturday’s 3 p.m., Fox-televised matchup at No. 16 Wisconsin is a battle of 6-2 teams that will certainly have a physical feel. 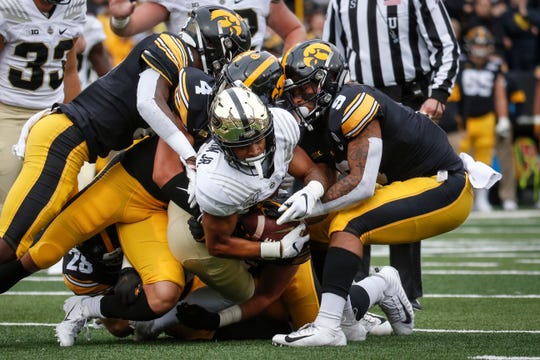 Iowa's defense, here causing a fumble against Purdue, have been especially aggressive in practice in the past 2-3 weeks. (Photo: Bryon Houlgrave/The Register)

“You do see it carry over,” sophomore free safety Jack Koerner said following Tuesday’s full-contact practice. “At first, you may think, ‘Why are we tackling? This could get somebody hurt.’ But it makes us more effective in the game. I think everybody’s bought into that.”

That buy-in includes the scout team.

And, considering this is full-contact … they’ve been sacrificing their bodies to the first-team defense.

“I feel bad for them, the way we’ve been getting after them this week,” senior cornerback Michael Ojemudia said. “But it’s definitely going to be fulfilling for them if we come out with a win, and they’ve done so much to help us.”

Iowa coach Kirk Ferentz defended the physical nature of practices, noting that the veteran players largely had no contact during the post-Northwestern idle week. The strategy certainly leaves room for second-guessing if another late-week practice injury crops up.

"We try to be smart when we get into November," Ferentz said, "but we just came off a week where we were really trying to pull back and let the guys get recharged."

Players are well aware of the stakes surrounding Saturday’s game.

With both squads 3-2 in Big Ten Conference play, there’s no mystery that the loser will be essentially eliminated from the West Division race — because of the head-to-head result and knowing that No. 13 Minnesota (8-0, 5-0) needs to be caught.

The Hawkeyes and Badgers will know by the time Saturday’s game kicks off at Camp Randall Stadium whether No. 5 Penn State (8-0, 5-0) has knocked off the Gophers in an 11 a.m. matchup. If the Nittany Lions prevail as 6½-point road favorites, the Iowa-Wisconsin winner will control its West fate.

Defensive coordinator Phil Parker laid out the situation for his players this week and asked them what they would do to be within four wins of a spot in the Big Ten championship game.

“They’re the team in front of us going to the Big Ten championship,” Ojemudia said of Wisconsin, which has won three of the past five West titles. “The stakes are at an all-time high for us. Coming off a bye week, there’s going to be no excuses.”

The "no excuses" counts injuries, and there are plenty of them to count ... with not much good news.

We already knew wide receiver Brandon Smith would be out for a second straight game following ankle surgery, but Ferentz's Tuesday update that the team's top target "is going to be out for a while" is very concerning. Getting Smith back at any point in the regular season (which has just 24 days to go) would seem like a victory.

Ferentz also said that middle linebacker Kristian Welch would likely miss a third straight game with a stinger and was pessimistic about tight end Nate Wieting returning from an ankle injury. Welch is an especially significant loss. Iowa's senior, co-captain middle linebacker — who hails from Wisconsin, no less — would be a valuable piece in Madison.

Instead, redshirt freshman Dillon Doyle will get his third straight start, and he'll need to play the best game of his young career. True freshman Jack Campbell could get some time, too.

"It's the worst part about football, frankly, the injuries. It's just so disappointing," Ferentz said. "(Welch) has been one of our hardest-working players. He's so conscientious, so bought-in.

"Football is hardly fair. But he's making a contribution. We've got two young guys playing for him right now, and he's out there coaching those guys every day; working with them, talking in their ear. And that's really valuable, too."

OK, there was a slight bit of good news. And it could prove significant.

Kyler Schott is practicing and on track to return — perhaps even to the starting lineup against Wisconsin, Ferentz said. Schott has missed five straight games with a serious foot injury he suffered during Iowa's first idle week.

The redshirt sophomore was one of the coolest stories of September — a plucky walk-on powering his way into the offensive line's starting five with a surprising ruthlessness from an undersized frame. (His height is listed at a generous 6-foot-2.)

The Hawkeyes' guard play has been subpar since the Oct. 5 game at Michigan, so Schott's return could be a big deal. He was impressive as a run-blocker in his 2½ games of action, and if he helps Iowa grind out extra yards in an expected slugfest, that would be great. But expectations also should be tempered, considering left tackle Alaric Jackson was slow to regain his typical form after missing a month of action.

If Schott starts, he would replace Mark Kallenberger at right guard. Perhaps Kallenberger (a trained left tackle) could then slide to left guard and rotate with Landan Paulsen and/or Cody Ince.

"We plan on playing (Schott)," Ferentz said, "and he'll play extensively if he's able to do so. We'll see how it finishes up (with Wednesday's practice)."

It’s also notable that only one trophy isn’t stationed within the Hansen Football Performance Center.

Wisconsin has won the Heartland Trophy (affectionately called “Albert the Bull” by defensive end Drew Ott in 2015) in six of the past seven meetings, beginning with the 2010 fake-punt game in Iowa City. The Badgers have won the past three meetings, including last year’s 28-17 triumph at Kinnick Stadium in which they scored 14 points in the final 52 seconds.

“It’s all about who goes the full 60,” wide receiver Ihmir Smith-Marsette said. “They went the full 60 last year. You’ve got to respect them on that. They compete.”

Since re-establishing trophy games as a program priority following the 2014 season, Iowa is an impressive 14-3 in those contests: 5-0 vs. Iowa State, 4-0 vs. Minnesota, 4-0 vs. Nebraska and … 1-3 vs. Wisconsin. The Badgers also put a high emphasis on trophy wins — they're 17-2 against Iowa, Minnesota and Nebraska since 2010.

“It’s always a goal of ours every year to win every single one of those,” Koerner said, “and have all those trophies in the building.”