The last time Iowa was a home favorite vs. a top-10 opponent, things went very well for the Hawkeyes. How can Iowa repeat that formula vs. Minnesota?

Watch our Hawk Central Huddle for the week of Nov. 13. Des Moines Register

IOWA CITY, Ia. — In the context of No. 22-ranked Iowa being a 3-point favorite for Saturday’s 3 p.m. clash with No. 7 Minnesota, someone asked me a terrific question.

When was the last time Iowa was favored at home against a top-10 opponent?

The answer serves as a revealing history lesson and a potential recipe for a Hawkeye victory.

The circumstances leading up to that matchup and Saturday’s against Minnesota are strikingly familiar. 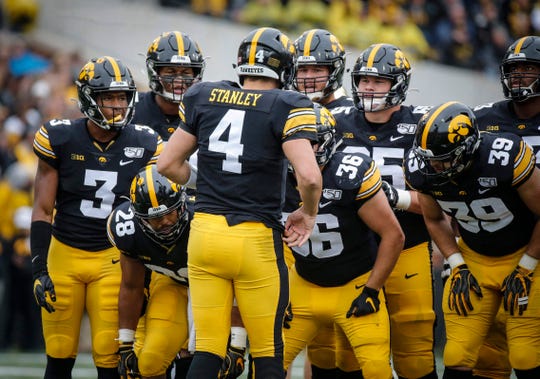 Do Nate Stanley and the Hawkeyes have their best performance of the season within them Saturday against Minnesota? Time's running out for us to see this 2019 team at its best. (Photo: Bryon Houlgrave/The Register)

The previous week in 2010, Iowa had suffered a crushing one-point loss to Wisconsin that took a bite out its Big Ten Conference hopes. Last Saturday, Iowa’s 2-point loss to the Badgers brought a gut punch of deflation.

In 2010: A high-flying team that seemingly can do no wrong — having beaten Notre Dame in overtime and won important Big Ten games against Michigan, Wisconsin and Northwestern — comes to Kinnick Stadium to face a Hawkeye team licking its wounds after an emotionally draining loss.

In 2019: The 9-0 Gophers come to Kinnick with national buzz. They've had great escapes and are fresh off what could be a program-changing 31-26 triumph over top-5 Penn State. And now they face a Hawkeye team that's hurting. Sounds familiar, huh?

As most of you remember, the Hawkeyes rose up and absolutely pounded Michigan State in 2010. It was 30-0 by halftime. Iowa won, 37-6. A monumental thrashing of a top-5 team. The oddsmakers were proven correct.

That would become Michigan State's only loss in an 11-1 regular season; could the same fate be awaiting Minnesota?

Iowa took the opening kickoff and marched 80 yards on 12 plays for a 3-yard Colin Sandeman touchdown catch. Creative play-calling — imagine that — sparked the drive. Offensive coordinator Ken O’Keefe dialed up an end-around on the game’s second play, and Derrell Johnson-Koulianos raced up the left sideline for a tone-setting 17 yards.

One of Minnesota’s calling cards of 2019 has been aggressive starts. A 66-yard touchdown pass got things rolling on the Gophers’ fifth snap against Penn State. They’ve trailed for only 10 minutes, 35 seconds in six Big Ten Conference games this fall and haven't trailed, period, since Oct. 5.

I’ve brought up this drought a few times in the last month, and it’s continued. Iowa hasn’t scored on defense since last year’s Illinois game. That’s a rarity for a Phil Parker defense, which prides itself on game-changing turnovers. Iowa's most recent win against a top-10 opponent, a 55-24 thrashing of Ohio State in 2017, began with a pick-six by Amani Hooker.

Against Michigan State in 2010, one of the most memorable defensive touchdowns of the Kirk Ferentz era unfolded. Cousins’ downfield throw was intercepted by Tyler Sash, who intelligently lateraled the football to teammate Micah Hyde. The skilled defensive back darted and dove his way into the end zone for what was credited as a 66-yard touchdown. Iowa led, 17-0, with 10 seconds left in the first quarter.

Talk about an opening statement.

It’s time for the 2019 Hawkeyes to become Ball Hawks. They’ve only recorded seven interceptions this season, a far cry from the 2017 and 2018 teams (which combined for 41 pickoffs). Minnesota’s Antoine Winfield Jr., in contrast, has seven by himself.

No. 3: Play clean and carefree.

Iowa committed no turnovers against the Spartans in 2010 and, perhaps feeling like there was nothing to lose, demonstrated the quality of its football team in a pressure-free performance.

The opportunity is similar for the 2019 Hawkeyes on another Fox-televised stage, with a night-game feel when the sun goes down in the second half. During Iowa player interviews Tuesday, there was a gnawing sense of frustration that they haven’t played to their potential yet in 2019.

Time’s running out. And it’s time to have some fun.

Can the Hawkeyes do it?

Of course they can. I still believe what I said in July, when I picked Iowa to win the Big Ten West: This is a good roster with good pieces in key places.

Will they do it?

I, like a lot of Hawkeye fans reading this, need to see it to believe it.

After going 7-2 against the spread the past two weeks, we're back to .500 for the season. Let's get to the rest of Saturday's Big Ten slate.

Prediction: After blowing a 25-point lead in a home loss to Illinois, the Spartans are cooked. Stick a fork in them. The defense is a sieve. They have no chance against mighty Michigan … right? Except Mark Dantonio always finds something in the tank for the hated Wolverines. If Michigan State has one punch left this season, this will be the one. If not, Michigan will roll. Michigan 30, Michigan State 23

Prediction: Nebraska is coming off an idle week, while Wisconsin is fresh off a dogfight with Iowa. The Huskers should have motivation, needing two wins for crucial eligibility (they finish with Maryland, which should be a win, and Iowa). Junior Jonathan Taylor needs 160 rushing yards to pass Ohio State's Archie Griffin (5,589) for second place in Big Ten history. Wisconsin 42, Nebraska 24

Prediction: An intriguing game from both sides. The Hoosiers, despite a groundbreaking season by their standards, are hungry for a signature win. Peyton Ramsey is at the quarterback helm again with Michael Penix out for the season, and he’s playing his best football. Penn State must be stinging from the Minnesota loss, but James Franklin has been excellent avoiding traps the week before Ohio State. The past four years in the week preceding the Buckeyes’ matchup, Penn State's average victory margin of 28.5 points. Penn State 38, Indiana 14

Prediction: The Buckeyes have never been a bigger favorite in their storied history, although (according to Forbes) this won’t be the biggest spread in college football history. A 1989 game saw Houston as a 59-point favorite over SMU. The Buckeyes, honestly, would be silly to let Justin Fields play beyond the first quarter; Ohio State has Penn State and Michigan after this. Hot take: Rutgers, which has been shut out nine times since joining the Big Ten in 2014, scores points Saturday. Ohio State 52, Rutgers 3