Leistikow's DVR Monday: In search of an explanation for Iowa's run-game struggles

The Hawkeyes tried a little of everything; Brian Ferentz still had a good day; and more impressive work from A.J. Epenesa and Kristian Welch.

Leistikow's DVR Monday: In search of an explanation for Iowa's run-game struggles

Even though there’s Friday’s regular-season finale at Nebraska and a bowl game remaining for the 2019 Iowa football team, we can safely say that the Hawkeyes’ offense needs to look different in 2020.

A win’s a win, yes. Saturday’s 19-10 triumph against Illinois was deserved and earned, moving the Hawkeyes to an 8-3 record.

But it certainly highlighted the notion that the defense, once again, continues to carry this team.

Let’s examine some big themes, good and bad, from the Hawkeyes’ home finale. We’ll start with the most common question I received before delving into the film. 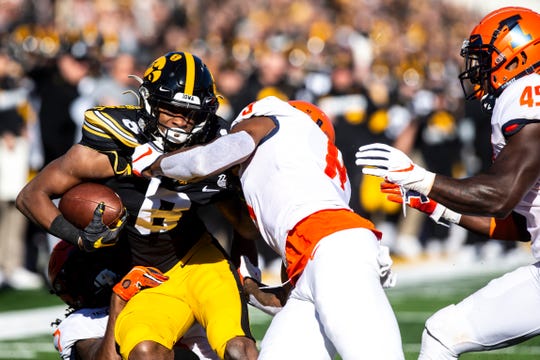 Was the running game as bad as we thought?

Iowa rushed 32 times for 79 yards, a paltry 2.5 yards per carry against one of the Big Ten Conference’s worst run defenses. So naturally, there was frustration. And yes, it was that bad.

But the bigger question is: Why?

A lack of play-calling creativity wasn’t an issue. Offensive coordinator Brian Ferentz had 12 runs go to the right (for 12 yards), 10 up the middle (for 38 yards) and 10 to the left (for 29 yards). Iowa averaged 2.6 yards per carry when running out of shotgun; 2.4 yards per carry when Nate Stanley started under center.

They tried a lot of things; nothing really worked.

Iowa center Tyler Linderbaum on the tough going against Illinois on Saturday. And on the toughness of his quarterback, Nate Stanley. Listen: Hawk Central

A few other observations:

Illinois was just hyper-committed to stopping the run. Tyler Goodson’s first run of the day underscored that point, as Nate Hobbs charged into the backfield from his spot defending slot receiver Nico Ragaini and stuffed Goodson for a 4-yard loss.

Goodson didn’t seem to have the same burst he had shown last week. Maybe that was because of the ankle injury he suffered against Minnesota. Credit Illinois: It has some excellent speed at linebacker that disrupted Iowa’s runs. On a counter run that often works well for Iowa, Goodson (21 carries, 38 yards) looked like he had some running room but Dele Harding closed fast to hold the talented freshman to a 2-yard gain.

Iowa was often blocking six-on-eight or seven-on-eight or seven-on-nine. Add missed blocks to the equation, and the numbers don't add up to success. That's why (as you'll see in the next section) that more daring pass calls were necessary and successful. On Iowa’s first run of the second half, nine sets of Illinois eyes were focused on the Iowa backfield — and Goodson was stuffed for no gain on a handoff up the middle.

He, and Iowa’s running game, just didn’t have a chance Saturday.

As established, Illinois’ defense made sure Iowa’s run game was a losing proposition. In that sense, the pass should have been open — and it was, as Stanley threw for a season-high 308 yards ... and could’ve pushed 400 if not for some bad overthrows. The intermediate throws were available most of the afternoon, which is why we saw tight ends (who combined for five catches for 101 yards, all in the first half) have their best day of the year.

One play that I especially liked was one that always seems to be open when tried. It’s when Stanley fakes the outside-zone run to the left, then bootlegs to the right, where a receiver drags along the line of scrimmage for a short toss, with an opportunity to run after the catch. Iowa used that underneath decoy to perfection late in the second quarter, as Illinois' attacking defense was focused on dragging receiver Tyrone Tracy Jr. That allowed Stanley to find Ihmir Smith-Marsette for a lovely deep ball that garnered 29 yards up the right sideline.

But when Iowa’s offense could have really put the game away, two poor outcomes can be pinned on play-calling.

Third-and-5 from Illinois’ 11: After a timeout with 2:53 remaining, Stanley's quick-drop fade pass to Tracy sailed 7 yards wide of the end zone. A predetermined throw to a 5-foot-11 receiver was basically a concession that Iowa was too scared to turn the ball over or take a sack. While Keith Duncan did convert his for three points, just about any other play call would have had a better chance at seven. Even an in-bounds run play would’ve had more value in forcing Illinois to spend a timeout.

Fourth-and-5 from Illinois’ 21: Now up 19-10, Iowa did the right thing by going for a first down. A field goal does little good there. But why come out in a heavy-personnel package (three tight ends, fullback, running back) and run play-action? Stanley basically threw the ball away when Nate Wieting was covered. Spreading the field with better receivers and letting your senior quarterback find a mismatch would’ve been a better path to a completion of 5 yards or more. A first down there would’ve ended the game; instead, the defense had to return to the field with 1:36 left. 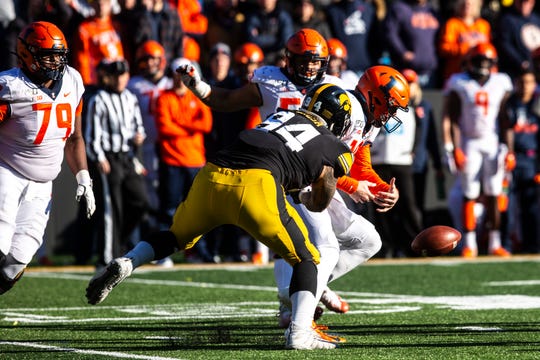 On a turning-point sequence, A.J. Epenesa and Kristian Welch showed why they are Iowa’s two best defensive players.

On second-and-11, Welch obliterated a slot receiver's block attempt on a toss right. Welch shoved Donny Navarro into the backfield, freeing himself to tackle Bonner for a nominal 3-yard gain.

On third-and-8, Epenesa blazed past Lowe to hurry Brandon Peters into a scramble situation and a failed throw.

Later in the second quarter, Welch made what quietly became one of the biggest tackles of the game.

After Keith Duncan’s second missed field goal, the score was still 10-7 and Illinois was on the move. On second-and-5 from its own 45, Peters found Bonner on a screen pass. Welch (6-foot-3, 239 pounds) from his middle linebacker spot raced to the right sideline and dove to tackle Bonner in bounds for a gain of 6.

Had Welch not gotten there, Bonner had 10 yards of clear sailing ahead and could’ve stepped out of bounds, to boot. Instead, Illinois lost 18 seconds of game clock and wound up giving the ball back to Iowa with :12 to play. That stop turned into three big Iowa points before halftime.

In the second half, their game-changing impact continued. Epenesa had an impressive tackle for a 4-yard loss and forced a fumble. Welch punched a fumble out of Peters’ arm for a big fourth-quarter turnover and made a game-ending sack.

The junior defensive end speaks after a 19-10 win against Illinois. Hawk Central

We saw that at the end of the first half when Stone and Jack Koerner came on a rare double-safety blitz. But maybe that’s the genius of defensive coordinator Phil Parker, that he blitzes when teams least expect it.

One such example proved to be another game-changing moment. After Peters scrambled for 12 yards (past Epenesa, who was double-teamed) on third-and-5, Illinois had the ball at Iowa’s 29 in a 13-7 game. Timing his rush beautifully, cash linebacker Dane Belton charged untouched into the Illinois backfield, and Stone sprinted to back-fill Belton’s spot.

Forced to hurry the pass away, Peters threw to Navarro but Stone met him as the ball arrived for a 3-yard loss. The drive ended with a failed field goal, and Iowa took the ball from there and drove for three points of its own.

However, it should be noted that a later blitz by Belton got burned for a 19-yard run — through Belton’s vacated area — by Reggie Corbin.

What is a late hit anyway?

According to the NCAA rule book:

"No opponent shall tackle or block the ball carrier or simulated ball carrier when he is clearly out of bounds or throw him to the ground after the ball becomes dead."

In live view, it sure seemed like the Illini were guilty of four or five out-of-bounds tackles. In general, I like giving the defender the benefit of the doubt. And after the rewatch, I think that’s what the officials largely did. At least they were consistent.

The most egregious miss, though, was when Smith-Marsette returned a fourth-quarter kickoff and was in the clutches of Illinois’ Nick Walker, who continued to follow through with his tackle even after both players were a few yards out of bounds. That should’ve been a 15-yard penalty in Iowa's favor.