The former Hawkeye commitment has had a splendid three-year career with Arizona State.

Are you ready for the Eno Benjamin Bowl?

That matchup would certainly resurrect the details of what happened in the fall of 2016, as Benjamin and three other Texas-based prospects decommitted from Iowa over the Hawkeyes’ no-visiting-other-schools-once-committed policy.

Benjamin has since joined Arizona State, where he has amassed nearly 3,500 yards from scrimmage (2,867 rushing, 625 receiving) during a sparkling three-year career. Benjamin recorded his second straight 1,000-yard rushing season for the Sun Devils, whose 7-5 record included a win at Michigan State and an upset of Oregon. 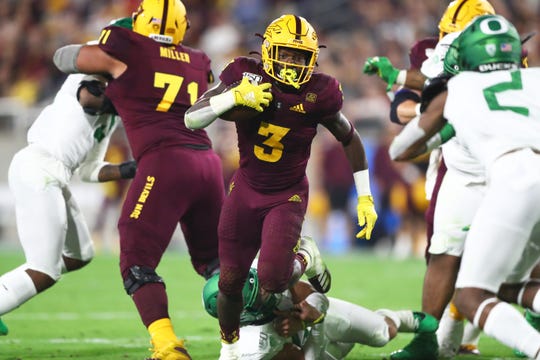 Eno Benjamin rushed for 1,642 yards as a sophomore at Arizona State and is at 1,083 this season entering the bowl game. (Photo: Mark J. Rebilas, USA TODAY Sports)

According to Holiday Bowl director Mark Neville, Arizona State and USC are the leading candidates from the Pacific-12 Conference. In the Big Ten? It’s either Iowa or Michigan.

"I don’t see a scenario that we don’t get one of those two," Neville told the Register this week of the Big Ten options. "... These are the two schools we have hoped to get.”

And even though Michigan carries a bigger brand than Iowa’s, there no doubt that the Hawkeyes’ enthusiasm for returning to San Diego for the first time since 1991 is resonating. That said, Michigan hasn’t been to the Holiday since 1994, either. Neville views this as a dream scenario, knowing that his bowl will get either one of those teams in what’s the last year of his bowl being a Big Ten Conference tie-in for the foreseeable future.

“You love having teams come to town that want to be in your bowl game,” Neville said. “It makes it more fun for everybody, right?

“Typically, you like to have teams that are on the rise. It’s more fun that way, also. But there’s so many things that go into the decision-making process.”

As we talked, Neville was careful to couch his positive Iowa comments with positive Michigan comments. He and his committee do talk to other bowls — like the Citrus, which also might be picking either Iowa or Michigan, if it gets to pick a Big Ten school — to see what they’re thinking.

“We try to get a little information,” Neville said. “But even then, you have to take that with a grain of salt, because things can always change.”

We don’t have to wait much longer.

Don’t go booking your tickets yet, though.

Iowa could slip to the Dec. 30 Redbox Bowl in Santa Clara, California, where ... it's also possible that Arizona State is the opponent.

We’ll all find out together Sunday afternoon.