After four successful months with a test group, the bosses have decided to keep the texts flowing. Here's how it'll work and why you should subscribe.

Subscribers, this new feature offers you insider info as well as the latest about Hawkeye football, basketball, wrestling and more.

Though I was excited to try something new, part of me was admittedly nervous four months ago when we launched a text-message group revolving around Hawkeye sports.

Even though it was a free for 90 days (which turned into more like 130), would anyone besides my mom and dad even want to join?

Sure, it was just a test, but what if it was a total flop?

The company hoped to get 100 or 150 — maybe 200, with some momentum — test-groupers over the course of 90 days. Instead, we got 450 within two hours of the column that launched the group — and we had to cap the group at that point (although it was free to you, it was costing the bosses money!). The idea of the test group was to see whether this may be something that subscribers would find valuable.

The text group turned out to be an easy sell — that you and I could connect on a more personal level while having the option to limit our exposure on Twitter or social media, where we all know things can get toxic. I would offer some insider stuff that I didn’t tweet, answer your texts privately when I could and, of course, provide the latest key info about Hawkeye football, basketball, wrestling and more.

Anyone who signed up would get, on average, two to three text messages a day (an occasional update on my personal life would make it into the mix, too — hey, it’s super-easy to opt out if that’s not for you). On football Saturdays, it might be five to six. I tried to keep texts between 8 a.m. and 8 p.m. CT (sorry, West Coasters, for those early wake-up calls). 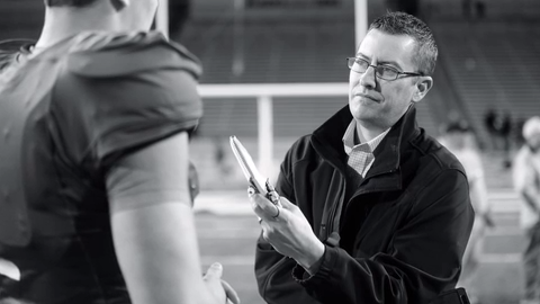 The feedback was resoundingly positive. And, in what I’d call a pleasant revelation, the text group revealed to me that a significant majority of Hawkeye fans are resoundingly positive people, too. That’s not always apparent on Twitter, but it comes to light over private text-message conversations.

Why rehash all that? Because it brings us to today.

That’s why we are now making this available to anyone who subscribes to Hawk Central, the Des Moines Register or Iowa City Press-Citizen. If you’re not yet a subscriber, it’s easy (and, in my opinion, very reasonable) to sign up. I’ve detailed the benefits of a subscription in a previous column. I don’t think anyone blankets the Hawkeyes like we do, from football to basketball to wrestling to recruiting.

If you’re a subscriber (or want to become one), just click the link below, log in with your online credentials, and sign up for the text group with your phone number. That’s it. You can bail on the text group at any time; after all, it's a benefit to your subscription, not an add-on.

(And hey, Mom and Dad, you can use the same login on both of your phones. You don’t need to subscribe twice!)

Since the text group started, we've launched a three-times-weekly newsletter for subscribers, and Mark Emmert and I have kept to our promise to deliver subscriber-only podcasts, which have been a humbling, huge hit. You Hawkeye fans sure do love your podcasts. We plan to produce several from the Holiday Bowl in San Diego in a few weeks.

If you're ready to sign up for the text group, here's the link: Right here. Yes, that's it.

Will other people see my number?

No. When you respond to the group text thread, it just goes to me. I might respond to you individually, or I may quote part of your message back to the group thread, but that’ll come from my number, not yours.

Nobody else on the group chat will ever see your contact information.

What are you going to do with my number?

Junk texts are the absolute worst, and tricking people into sharing phone numbers is a terrible business model. It's simple: We’ll never give or sell your number to a third party. We won't abuse it internally. You'll get a handful of group texts a day about the Hawkeyes. That's it!

Go ahead and ask tough questions. But be nice, be respectful. And, most of all, have fun.