Wirfs wasn't even an all-Big Ten lineman a year ago; now he's the league's best. Epenesa, twice a first-teamer, is getting better every game.

SAN DIEGO — Sometimes, it’s easy to get obsessed about the future, rather than appreciating the present.

I’m guilty of it. A lot of us probably are.

But with how much attention we all want to place on the NFL decision that lies ahead for Iowa juniors A.J. Epenesa and Tristan Wirfs, it’s probably a good time to reflect on the impressive, accelerated progress they’ve made in becoming two of the more dominant players in college football.

It wasn’t even 36 months ago that the pair was in high school and played in the U.S. Army All-American Bowl in San Antonio together. They’ve only been at the University of Iowa for five semesters. 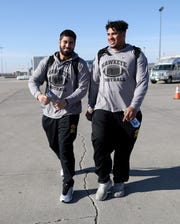 Iowa defensive end A.J. Epenesa, left, and offensive tackle Tristan Wirfs get ready to board the team plane Saturday. The elite juniors are preparing for the Holiday Bowl and will have an NFL decision to finalize soon. (Photo: Brian Ray, Hawkeyesports.com)

Gus Johnson and Joel Klatt will no doubt discuss Wirfs, the right tackle was recently named the Big Ten Conference’s offensive lineman of the year, on the Fox Sports 1 broadcast

On Monday, the always-smiling product of Mount Vernon was remembering an accidental spoiler alert he got from offensive line coach Tim Polasek. While Wirfs was minding his business and eating dinner with fellow 319 area code lineman Kyler Schott, Polasek called his cell phone.

“Did you hear?” Polasek said.

“Then he hung up. So, I knew something was going on,” Wirfs said, laughing. “Then when I saw that, my mom called right away. It was obviously something special.”

Wirfs also was named a first-team all-American by the Walter Camp Foundation and the Football Writers Association of America. He barely missed joining Iowa placekicker Keith Duncan as a prestigious consensus all-American.

That’s pretty impressive for a third-year offensive tackle who wasn’t on any all-Big Ten team (first through third) a year ago. Heck, it’s hard to get on the field as a tackle by Year 3 at Iowa.

Wirfs was thrown into the fire as a true freshman, after injuries collected seniors Ike Boettger and Boone Myers, and he’s continually become more dominant since.

“A lot of help from my teammates. Getting to go against (defensive ends) A.J. and Chauncey (Golston) … that kind of competition in practice really helps you in the long run,” Wirfs said. “I feel if I can block those guys — they’re some of the best D-ends I’ve gone against — I can block most people.”

Epenesa had a slightly different path to this point. One of the rare five-star recruits of the Kirk Ferentz era was a backup for two years, but also a dominant one — earning first-team all-Big Ten honors a year ago at defensive end. That achievement brought immense preseason attention to this fall, something Ferentz said Epenesa was “embarrassed by” over the summer. It also brought a ton of attention from opponents, and Epenesa’s production suffered.

“I wanted to do more,” Epenesa said, a recognition that he had 4½ sacks in his first eight games, well off the pace of the 10½ he had as a sophomore. “As the season went on, production started going up. From the very beginning, from the first game to the very end, I think it was a steady line of rising production.

“Tackles, (tackles for loss), sacks. Just being a force or being disruptive. That was the biggest thing for me, just trying to get more consistent.”

With a three-game finishing surge that saw him log another 4½ sacks and 23 tackles (including a mind-boggling 14 tackles against Nebraska), Epenesa again landed on the Big Ten’s first team and was named a second-team all-American by Walter Camp, The Associated Press and the American Football Coaches Association. He also shared team MVP honors with quarterback Nate Stanley.

And now, the Holiday Bowl.

“The trip’s only good if you win,” Epenesa said. “It’s a fun time. But the icing on the cake, just get that 'W.' That’s the main priority right now.”

Neither Epenesa nor Wirfs has received feedback from the NFL’s College Advisory Committee, which should come any day now. Both have been projected as first-rounders by NFL Draft pundits, but what that group says carries the most clout.

If they give first-round grades, that's a hard immediate future to pass up.

Wirfs said he and Epenesa have discussed their NFL future with each other every few days, but noted that they've probably spent more time talking about it with team sports psychologist Carmen Tebbe Priebe.

That said, Wirfs made the notable remark that, “yeah, I think we’d end up doing the same thing.”

The Iowa defensive end says he has gathered 19 tickets from teammates and many others have purchased seats for the game. Hawk Central

Here was Epenesa’s answer about the NFL on Monday: “Just focusing on USC and enjoying San Diego while we’re here. After that, just buy into the process and see what my options are.”

So, no groundbreaking announcements yet.

But we’ll get to that later. So will they.

First, they’ve got a third consecutive bowl game to try to win.