Jordan Lomax, a former team captain, shares his perspective on Chris Doyle, Kirk Ferentz and a 2017 interaction with Black players on Iowa's team.

With results of an outside investigation into racial bias within the Iowa football program expected to be revealed soon, perhaps this week, one of the most respected Hawkeyes of the past decade is confident that the biggest step toward lasting change has already occurred:

The removal of longtime strength and conditioning coach Chris Doyle, in a $1.1 million separation agreement.

Former defensive back Jordan Lomax also explains that the early-June airing of grievances was a final-straw effort by Black former players to draw attention to disparaging treatment from Doyle … something he tried to help solve behind the scenes three years earlier.

“The risk that you take when you go public is they can clean house, (and) we didn't want to see that,” Lomax says. “There's a lot of great men on that staff that have helped us out, that have families that have to put food on the table.”

Lomax is among the fraction of Black players from his era who “made it” at Iowa. A native of Prince George’s County in Maryland (a predominantly Black area just outside Washington, D.C.), Lomax was among 14 Black signees in Iowa’s 25-player recruiting class of 2011. During his five years as a player, he saw the arrival of 58 Black recruits — of which only 22 would finish their careers at Iowa (37.9%).

Lomax became an academic all-American and captain of the 2015 team that completed a 12-0 regular season and reached the Rose Bowl. Lomax later worked for the university as a fund-raiser, gaining new perspective on the business side of Hawkeye football. In short: There is perhaps no more impactful voice in moving this Iowa football/race conversation forward, and Lomax agreed to share his experiences and thoughts recently in a joint interview with The Des Moines Register and The Athletic.

During the conversation that stretched about 75 minutes, these were some of the most revealing points, as ways to improve the Hawkeye program continue to be explored. 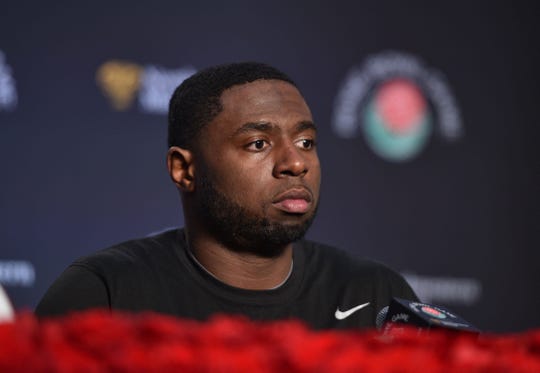 Lomax describes Ferentz as being a Fortune 500-type CEO who is the face of the organization but has limited player interactions vs. a COO strength coach in Doyle with year-round access to players, including via body monitors that tracked sleep patterns and activity away from the football building.

“Everything pretty much (that) went into Iowa football, Doyle had some type of input into it. And I think that's where, when you give somebody that amount of power and that amount of autonomy, it's tough,” Lomax says, “especially after the program starts to have success (as Iowa did in 2009 and with the 2015 resurgence).

“Because now it's like, ‘OK, if it's not broke, don't fix it. So, we're having success doing it this way. Let's keep doing it this way.’ And then as time keeps going on, Doyle, it's almost … you feel like you're untouchable.”

Lomax credits assistant coaches Phil Parker, Seth Wallace, Kelvin Bell and LeVar Woods for helping reassure him that he was valued at Iowa, a message he says Doyle didn't deliver. Lomax says it was common for older Black players to warn new prospects about what they perceived as Doyle’s belittling approach and racially insensitive jokes.

“And so now, Day 1, you're attacking me. … Now I'm thinking it is racially charged, his actions that he's bringing towards me,” Lomax says. “And so, it's just a snowball effect.

“I think (Doyle) was entrusted with a lot of power, and I feel like he abused that power. And it should have been more about establishing relationships with the players first before you attack them with demeaning behavior or demeaning insults.”

Doyle on June 7 denied having racial bias and said in a June 15 statement that announced his separation from Iowa that he would refrain from comment until after the outside investigation was complete. "I am confident that my record and character will be confirmed in the (investigation)," he said then.

Lomax urges heightened accountability with Iowa's next strength coach. Raimond Braithwaite, who is Black, currently holds that role on an interim basis.

Jordan Lomax amassed 27 career starts at Iowa, including all 14 during his fifth-year senior season of 2015 that ended in the Big Ten Championship Game (pictured) and Rose Bowl. (Photo: David Scrivner / Iowa City Press-Citizen)

2. The Hawkeyes’ on-field success can improve if personalities are allowed to flourish.

For the most part, Division I football recruits were stars of their high school teams. That often can be accompanied by a brash confidence to compete at a high level. Lomax echoes a common theme among former players that such attributes were diminished at Iowa, regardless of skin color. (Tight end George Kittle's big personality, for example, was diffused at Iowa and he has since become an NFL superstar.)

Lomax saw playing time as an area that was overly influenced by information provided to Ferentz by Doyle — in which white players were given the benefit of the doubt over Black players of similar ability.

“They wanted somebody that was just quiet; don't speak a lot,” Lomax says. “Just go out there and just handle your business.

“But everybody's not like that. And you can't hold everybody to that same standard, because that's not how guys can reach their full potential.”

“I think you have to let everybody be themselves and of course there are some things you have to sacrifice for the greater good of the team. But from the individual standpoint, this was me in high school. This is how I earned my scholarship offers and how you guys even wanted to take a look at me. Because these are the things that got me to where I am today. And now you're telling me I can't behave in that manner? Now I'm second-guessing like, ‘Who am I? Am I still that same player? Do I have it anymore?’”

Lomax has a unique position in the last decade of Iowa football, in that he was able to spend time with Ferentz off the field during leadership retreats, at Big Ten Conference media days in 2015 and a few years later, when he worked for the UI Foundation at golf outings and other fund-raising events.

He thinks those who have attacked Ferentz's character are off base.

"He's a great guy. I've seen him just outside of football. He can lead the change; I'm confident that he can," Lomax says. "And that's my personal opinion. I know others may disagree with it, but he can lead the change for sure. And I think he's demonstrated that, with having to separate from his best friend (Doyle).

"Every program is going to have its issues. But at the end of the day, Iowa football is a good program. And we just wanted to see it better."

4. Lomax realized in 2017 that racial disparities had worsened and more pointed conversations were needed.

Two years gone from the program, Lomax watched from afar as he saw 16 white players and two Blacks selected to the 2017 team’s leadership group. That alarming ratio led Lomax to confide his concerns to former Hawkeye Lon Olejniczak, who helped coordinate leadership retreats. Olejniczak relayed the message to Ferentz, who then called Lomax and opened the door for him to speak to Black players on the team.

Lomax jumped at the chance. And although he recalls outlining strategies for players to “make it” through the program — be punctual, toe the company line, don’t go downtown — he wishes now he had talked directly to Ferentz about drawing attention to Doyle's role in driving away Black players. From the 2013 through 2015 recruiting classes, only eight of 31 Black scholarship signees (25.8%) finished at Iowa.

“I was like, ‘I get it. I know it's tough downstairs in the weight room. But unfortunately, that's just how it is.’ And that's probably not what I should have said,” Lomax says. “I probably should have fought more for them.”

5. One of the players who heard Lomax's 2017 message, James Daniels, became the driving force for change.

That should serve as reassurance that Lomax planted an important seed. The 2017 conversation escalated awareness to racial-bias concerns. A diversity task force was created in 2018 to study abysmal Black student-athlete graduation rates. But the changes initiated in response to the results — such as allowing earrings, hats and rap music in the facility — did not get to the root of the problem, and Ferentz admitted he failed to follow up with Black players as promised after the 2019 season.

That, Lomax says, is why former players — led by Daniels, an offensive lineman for the Chicago Bears — felt their message had to become public, particularly as George Floyd's death while in police custody stoked the national conversation about racism in America.

If the team collectively decides to kneel, this will bring about a cultural change for both Iowa football and the state of Iowa which I believe is long overdue!!! https://t.co/o9L2BjnEue

There are too many racial disparities in the Iowa football program. Black players have been treated unfairly for far too long.

And while former players await results of the Husch Blackwell investigation and subsequent next steps, Lomax is encouraged by what he’s hearing from current players — that a dark cloud has been lifted, long-quiet voices are now being heard.

“The biggest piece that needed to be changed, got changed,” Lomax says, “with Coach Doyle leaving the program."