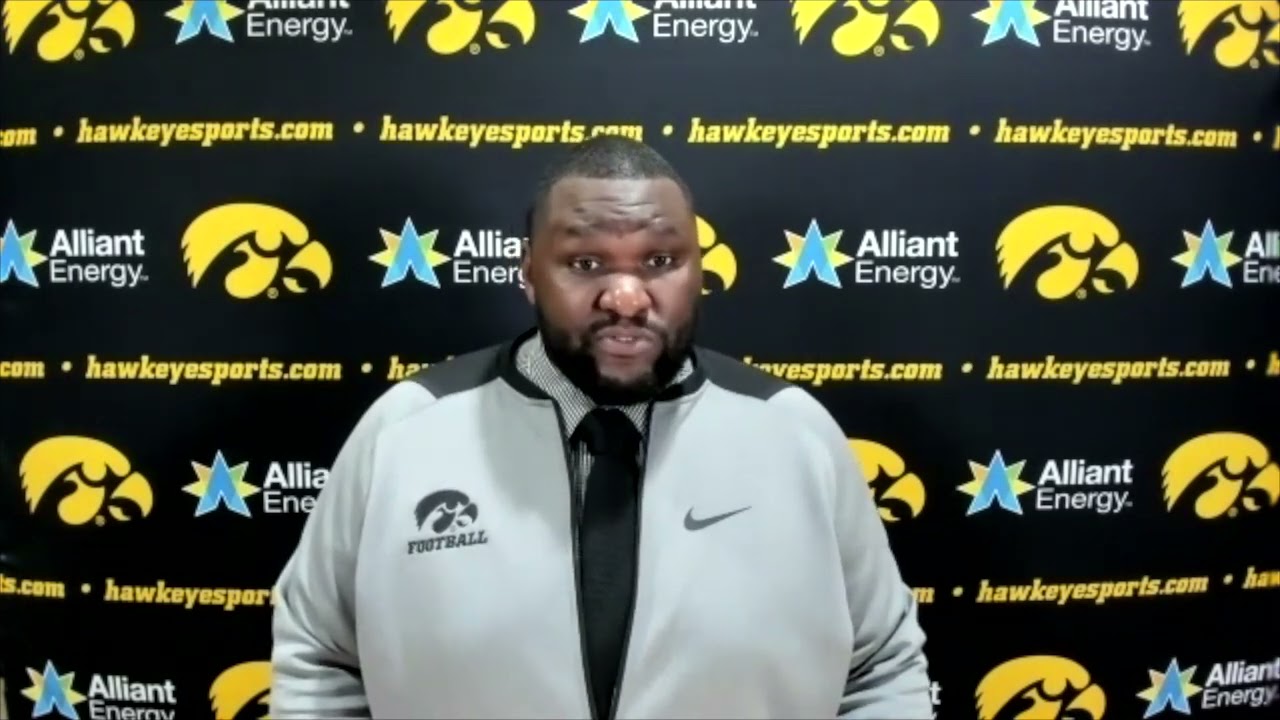 Hearing stories of open minds and changed hearts inside the Iowa football program was a lot more important this week than the X’s and O’s of spring practice.

Even though the media schedule had been set long ago, it felt like no accident that Kelvin Bell was one of the three Hawkeye assistant coaches on the docket in Wednesday’s press conference. His appearance came less than 24 hours after a jury found former Minneapolis police officer Derek Chauvin guilty on all counts in the murder of George Floyd last Memorial Day.

Bell is Black. He has spoken in the past about growing up in Mississippi, how his mother taught him certain behaviors in hopes that he is not perceived as a threat based on the color of his skin — hands at 10-and-2 on the steering wheel; always wear a smile no matter your mood; don’t make direct eye contact when passing a stranger.

He has seen racial injustices throughout his life, which is why he skeptically yet hopefully monitored Twitter on Tuesday afternoon awaiting the Chauvin trial verdict.

“Even if a man (is) murdered on camera for the world to see, and for you to still have doubt that the perpetrator would be convicted of murder,” Bell said, “shows you how much further we have to go, in terms of race relations, in terms of accountability, in terms of justice. Because I’ve seen it where the verdict didn’t go that way.”

It was Floyd’s death while in police custody that began a series of conversations that led to the June outcry by dozens of Black former players that highlighted racial inequities within the Iowa program over a long period of time. Among the fallout was the removal of strength coach Chris Doyle, an outside investigation that found "the program’s rules perpetuated racial or cultural biases" and a lawsuit against head coach Kirk Ferentz and the university by 13 Black former players.

That’s why Wednesday’s media availability served as a notable checkpoint for Hawkeye football. It was a proper time to ask about how much progress has been made in nearly a year. Players having freedom to kneel during the national anthem was an example of visible change, but what about things we can’t see from the outside?

Bell became a powerful spokesperson on that topic Wednesday.

“We’re heading in the right direction. I can’t stress that enough,” Bell said. “I love where we are right now, just in terms of the open and honest conversations and the uncomfortable conversations that we're having.”

Bell coaches Iowa’s defensive line. He presides over a diverse position group that includes Black, white and mixed-race players who hail from seven different states. Like most programs, Iowa stresses the importance of team togetherness and leadership.

After what unfolded last June, Bell realized he was missing a big opportunity when it came to having deeper, difficult conversations.

It was well-documented that the Hawkeye program had what special-teams coordinator LeVar Woods described as “emotionally raw” meetings last June that included screaming and crying.

As the conversations about race unfolded, Bell became shocked (in his words) that his white players “had no idea that our Black players felt the way that they did.”

“And I felt bad,” Bell continued, “because I missed an opportunity to educate them … on where I’m coming from. And what my drive to the facility may be like.”

What encouraged Bell, though, was that he saw white players open to learning about his perspective and experiences.

“They wanted to listen. They were thirsty for that knowledge,” Bell said. “Me being open and honest and transparent — vulnerable even — with some of my stories to them, I think it brought us closer.

The team met Wednesday — it normally doesn’t meet on Wednesdays in the spring — specifically to discuss the Chauvin verdict. That's notable, considering some current players in the Husch Blackwell investigation expressed skepticism that an initial uptick on racial-issues awareness would last. Linebackers coach Seth Wallace, who is white, said that the tone of Wednesday's meeting left him with a realization that the Chauvin verdict was a small step in a long journey ahead.

“It’s been 331 days since the passing and murder of George Floyd,” Wallace said. “And in between there, I don’t know how much has actually gotten better. So, we’ve got a lot of work to do.”

A recent article by Hawkeye Nation’s Rob Howe had tremendous detail from David Porter, a Black former Hawkeye offensive lineman and head of an advisory committee created by Ferentz in the wake of last June’s uprising. Porter spoke of the pushback his committee (all volunteers) has provided Ferentz in meetings that sometimes span 2½ hours.

“There are times when it gets heated,” Porter told Hawkeye Nation. “… I still consider Kirk a good friend. I hope he feels the same with me, especially after going through this process. But we've had some really tough conversations.

"These are ideas and beliefs about football and coaching that Kirk has had for a very long time, and he’s done well in football. I wouldn't expect him to just roll over and undo everything."

On Tuesday night, Ferentz issued a strongly worded statement on the Chauvin verdict.

“Today’s guilty verdicts were justice being served,” Ferentz’s statement read. “It is one step forward on a long path to equality.

“In our program, this has been a year of listening to candid conversations about the real racism and inequality that exists for many on our team. Our players have been painfully honest about their experiences and are teaching me to be a better coach and person.

“We all have a role in creating a team, community and nation where all people are valued and safe. More must be done, and it begins with each of us.”

Thinking back to where the program was one year ago, it’s worth noting that Bell feels good about what he’s seen transpire in the Iowa football building.

But, as is the case in America, the work is far from finished.

“Hopefully once they leave here, they can go and make the world a better place. Because they’re the future policemen, they're the future troopers, they're the future lawyers and doctors of this world. I don't take lightly the impact that we're going to have on them during this four- or five-year period.”