The Register's Matthew Bain answers your recruiting questions in his weekly mailbag.

April is finally here, meaning AAU basketball programs across the country are gearing up for their seasons. Things will be a little different this year, because of NCAA rules changes.

There used to be five evaluation periods, when Division I college coaches were allowed to scout prospects at AAU tournaments. Now, there are only two: one from April 26-28 and one from July 11-14.

So I've been driving around Iowa for the past few weeks to check out this state's AAU programs, and specifically evaluate the in-state 2021 guys.

That class is going to be good. Maybe not as strong as 2019, but dang good.

More on that later.

For now, let's get to this week's questions. 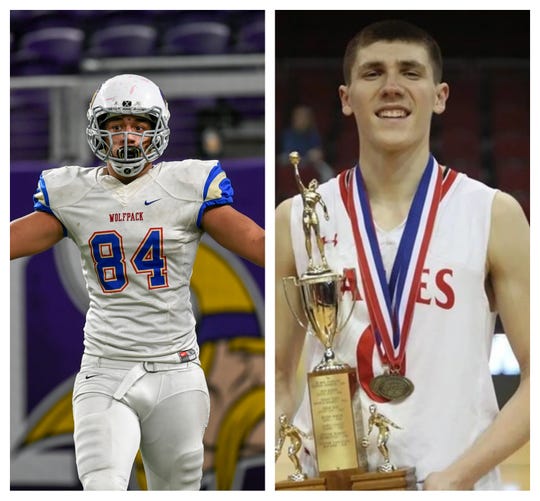 What type of skills does Caleb (Grill) bring to his game? — @ted_rood

If you're a Cyclones fan and haven't heard the name Caleb Grill, you will now.

He's a three-star guard out of Wichita who was originally committed to T.J. Otzelberger and South Dakota State. When Otzelberger left the Jackrabbits for UNLV, Grill was granted his release and has now become a target of several Midwest high-majors, including Iowa State.

The Cyclones offered Grill during his unofficial visit to campus Tuesday. I texted briefly with him after that visit, and he said he loved Ames. Kansas State, Illinois and Creighton (where he told me he'll visit Wednesday) are among the other schools involved, in addition to UNLV.

Unfortunately, I've never seen Grill in person. I'd heard about him, because it was a big deal he chose SDSU over the high-majors pursuing him at the time, including Texas Tech, Washington State and Nebraska. SDSU's staff was very proud to land him.

I have been able to watch Grill's film over these past couple days, though.

Although he can play the point if needed, Grill is primarily a score-first shooting guard. His shooting stands out. He is an excellent 3-point marksman with NBA range and a whole lot of confidence. That skill, alone, is enough for high-major discussion, and it will probably be his calling card in college.

But he's also got a good first step and the ability to put the ball on the floor, if needed.

Then there's the kid's bounce. He is a 6-foot-2 shooter who can rise up for thunderous dunks. With quick elevation, he also boasts a nice pull-up mid-range game.

All that said, he is a little undersized. That, and the fact that he plays his high school ball in Kansas and he didn't run with an elite AAU team, could have been why high-majors didn't go all-in at first.

There's no denying Grill has skills, and he's definitely a high-major recruit. It will be interesting to see how he adjusts to the physicality at the next level, especially in a high-major conference.

Both Iowa State and Iowa are among his nine offers.

Johnson just visited Iowa State last week, and he told me he essentially has an open invitation to come visit Iowa when he's able to. He struck me as a kid who's enjoying visiting different schools and getting to know all the coaching staffs, and not at all as a kid who's in a rush to make a decision.

"Like any kid, he’s balancing academics, competitive level of football, where his positions fits, scheme, just where he feels comfortable," Quinn said. "He’s a thoughtful kid." 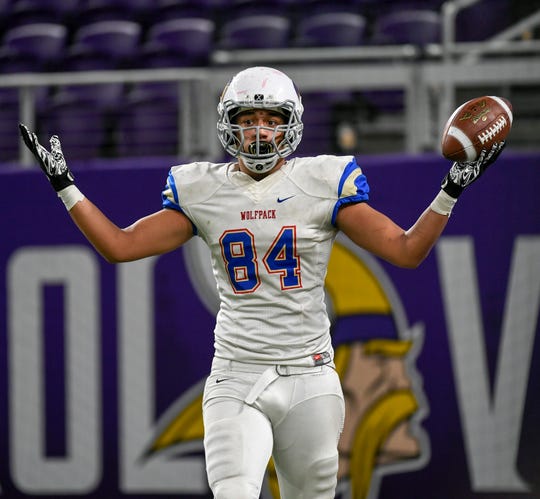 SMB Wolfpack tight end Kaden Johnson (84) celebrates after scoring a touchdown against Willmar during the second half of the Class 4A State football title game at U.S. Bank Stadium in Minneapolis on Friday, Nov. 23, 2018. (Photo: Special to the Register: Pioneer Press, Craig Lassig)

Johnson's teammate, three-star safety Craig McDonald, committed to the Cyclones in early March. Quinn said Iowa State's staff did a great job with McDonald, and the Cyclones have been among the teams showing the most interest in Johnson. Head coach Matt Campbell is already involved.

"He's developing a good relationship with (Iowa State)," Quinn said. "He appreciated getting to know coach Campbell. ... Iowa State has definitely spent quite a bit of time with us."

Iowa was the first school to offer Johnson back in December of his freshman year. Offensive line coach Tim Polasek has been the Hawkeyes' point man so far, Quinn said.

Johnson is a legitimate top-150 linebacker and an elite athlete. He just won a third consecutive state basketball title with five-star combo guard Jalen Suggs, and he also fares well on the AAU circuit with Suggs on Grassroots Sizzle. That's actually the only time I ever saw Johnson — on a basketball court in Milwaukee.

"I don’t know if there’s anything magical, necessarily. He loves (football) and he wants to be the best he can be," Quinn said. "Which means, I think, the best. Period.

"He’s been nothing but high-level competition and excited to practice every day, does whatever he’s asked, extremely coachable."

So, to finally answer the question: It sounds like, right now, Iowa State might be more involved. That doesn't necessarily mean Iowa isn't as interested. We'll see.

How likely is it for the Hawks to take a grad transfer (in basketball)? — @aaronlyons24

As things stand today, my guess today is that it's not super likely.

What is Iowa's biggest need in this late 2019 recruiting market? It's not experience.

The Hawkeyes won't be a young team in need of a bigger veteran presence next year. Jordan Bohannon, Ryan Kriener and Cordell Pemsl will be back. Luka Garza will be a junior. Isaiah Moss will probably be back, and there's a chance Tyler Cook returns, too.

That's a lot of experienced pieces who will eat up plenty of minutes. And that's not even counting minutes the rest of Iowa's returners will devour, too.

You land a good graduate transfer if you can promise an immediate role and plenty of minutes. I'm not sure Iowa offers that right now.

South Dakota State’s David jenkins, Jr. (5) watches a 3-point shot go in past Oral Roberts’ Emmanuel Nzekwesi during the first half of the Jackrabbits’ matchup with the Golden Eagles Saturday afternoon at Frost Arena in Brookings. (Photo: Jason Salzman / For the Argus LEader)

Of course, if Cook declares for the NBA Draft, maybe that changes.

And if Moss and Cook declare, things could get interesting.

For now, though, if Iowa were to take a transfer, I'd look at the sit-out route. A guy such as South Dakota State sophomore guard David Jenkins Jr. would certainly be worth a call. And Jeff Goodman is reporting that Iowa has reached out. He'd sit out next year, then play two seasons and graduate in the same class as Connor McCaffery, Joe Wieskamp and Jack Nunge.

If you were a 5-star recruit with offers from every major Division I program, where would you take your visits and why? — @codygoodwin

Oh man. This is a good one, Cody. Basketball is my sport, so I'm going to assume I'm a five-star point guard in this scenario.

(It took a lot for me not to laugh out loud typing that.)

One visit goes to my hometown college. I definitely wouldn't go there, but I'm sure they would have been the first to offer and they would have shown love before anybody else and all that jazz. So, UC Irvine, you're getting a visit.

Duke gets a visit. Because Duke.

Kentucky gets a visit. Because Kentucky. And I like John Calipari. (Sue me.)

Gonzaga gets a visit, because I'm a West Coast guy and would be interested in an elite option that would allow my family to see at least some of my games.

And if Bobby Hurley is still at Arizona State, I'll probably go visit Tempe. Other than UCI, that's the closest to home, and Hurley knows a thing or two about being a legendary college point guard.