“We need to get more people involved than Megan in our offense,” Lisa Bluder said. “It can’t be just a Megan show."

The No. 17 Hawkeyes had little flowing outside of Megan Gustafson, and Purdue leaned on a strong second half and made enough plays down the stretch en route to Saturday’s 76-70 win over Iowa. The victory was the Boilermakers’ second over a ranked foe in four days.

Gustafson set a career-high with 37 points on 17-for-23 shooting, but the rest of the Hawkeyes (15-3, 3-2 Big Ten) hit just 14 shots as Iowa’s guard play was spotty all afternoon. Kathleen Doyle and Alexis Sevillian struggled mightily, and the Hawkeyes still produced 16 turnovers, which stifled any chance at a fourth-quarter comeback.

Iowa teammates are introduced before their game against Purdue at Carver-Hawkeye Arena on Saturday, Jan. 13, 2018. David Scrivner/Iowa City Press-Citizen
Fullscreen

Iowa's Megan Gustafson waits for a second tipoff at the start of the Hawkeyes' game against Purdue at Carver-Hawkeye Arena on Saturday, Jan. 13, 2018. David Scrivner/Iowa City Press-Citizen
Fullscreen

Iowa's Megan Gustafson celebrates a basket and a foul during the Hawkeyes' game against Purdue at Carver-Hawkeye Arena on Saturday, Jan. 13, 2018. David Scrivner/Iowa City Press-Citizen
Fullscreen 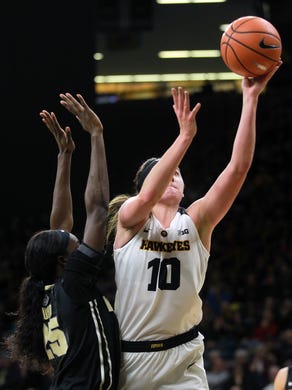 Iowa's Megan Gustafson takes a shot in the final seconds of the first half of the Hawkeyes' game against Purdue at Carver-Hawkeye Arena on Saturday, Jan. 13, 2018. David Scrivner/Iowa City Press-Citizen
Fullscreen

Iowa's Megan Gustafson celebrates a buzzer-beating basket to end the first half of the Hawkeyes' game against Purdue at Carver-Hawkeye Arena on Saturday, Jan. 13, 2018. David Scrivner/Iowa City Press-Citizen
Fullscreen

Purdue (12-7, 3-2) snatched the lead for good midway through the third quarter, surging out of the break on a 17-10 run that left Iowa somewhat reeling. The Hawkeyes whittled the deficit down to a single possession on two different occasions — 59-58 with 7:20 to play and 67-65 with 2:36 remaining — but Iowa never pushed through.

“It seemed like our focus wasn’t always there on defense,’” said Chase Coley, who had 10 points, five rebounds and five assists. “Just a few lapses in communication, not being able to find (Purdue’s Andreona) Keys on the court — just a few things that we can fix, though.”

“They did a triangle-and-two a lot, so the rest of us were open,” Keys said. “And since I was open, I shot the ball today. My coaches kept saying, ‘Just shoot it — you’re open.’ “And that’s what I did and got into a flow.”

'It can’t be just a Megan show'

It’s just one sour performance, but Iowa undoubtedly missed the backcourt depth it once owned on Saturday. With Tania Davis (torn ACL) and Makenzie Meyer (hand) still both reduced to spectators, the Hawkeyes’ guard play struggled on the shoulders of Sevillian and Doyle.

Neither got it going from the field, combining for just 14 points on 5-for-28 shooting. Nothing fell from deep either as Sevillian and Doyle totaled two treys on 15 attempts, essentially nullifying Gustafson’s overwhelmingly dominant performance.

“We need to get more people involved than Megan in our offense,” Bluder said. “It can’t be just a Megan show. And to me, it looked like we were kind of waiting around and letting her do the work for us.”

The Megan show was certainly effective, as Gustafson did all she could to keep Iowa afloat, pouring in 15 fourth-quarter points — and five straight at one point — to bring the Hawkeyes within a possession. She accounted for more than half of the Hawkeyes’ first-half scoring and reached her 17th double-double this year midway through the third quarter.

But the troops never arrived.

“It makes it really hard when nobody is hitting from the outside,” Bluder said. “That was a tough scenario.”

Bluder shook the starting lineup up a bit, inserting Carly Mohns in for Amanda Ollinger. The Cedar Rapids sophomore had started the previous four games after Makenzie Meyer’s hand injury — but had gone scoreless in three of those — and Iowa instead opted to give Mohns her first career start. 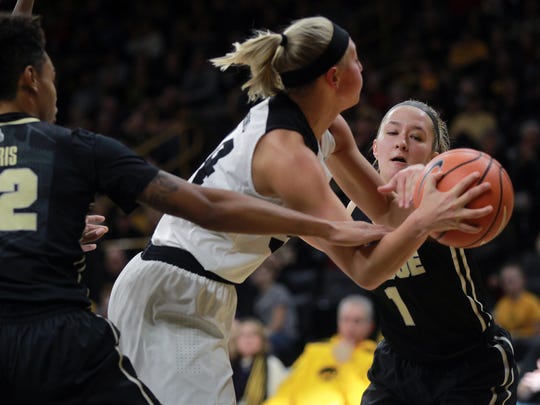 On the road again

Although it’s still way early in conference play, Saturday’s loss takes away some juice from Iowa’s productive start in conference play. Purdue is a solid team and had been playing decently coming in, but you never want to let a home opportunity slip away amongst the road trees. 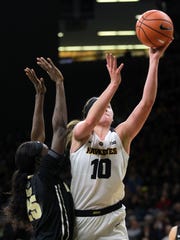 Iowa's Megan Gustafson takes a shot in the final seconds of the first half of the Hawkeyes' game against Purdue at Carver-Hawkeye Arena on Saturday, Jan. 13, 2018.  (Photo: David Scrivner/Iowa City Press-Citizen)

After beginning Big Ten play with three of the first four away from Carver-Hawkeye Arena, Iowa heads back out again next week with road games at Nebraska (Tuesday) and Minnesota (Sunday). Those precede a monumental showdown versus Ohio State on Jan. 25.

With a lot of jostling still to go up top in the standings, Iowa can’t afford to drop many more winnable affairs.

“I think the most important thing is to just stay optimistic and stay positive,” Gustafson said. “Even though our defense wasn’t there tonight, it doesn’t mean it can’t be there for the rest of the week going into these two road games."