The Hawkeye forward took over late to keep the team undefeated while Iowa unveiled a new-look backcourt and (eventually) showed a better defensive effort. 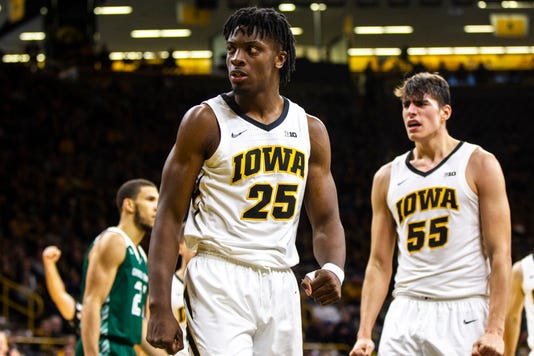 IOWA CITY, Ia. — Tyler Cook wouldn’t say who exactly he was glaring at after a ferocious second-half dunk Sunday that seemed to signal to everyone in Carver-Hawkeye Arena that Iowa was not about to lose a basketball game to Green Bay.

Cook made sure of that. He scored 14 of his 17 points after halftime. Iowa eventually pulled away for a 93-82 victory.

“I won’t answer that one,” Cook said with a smile when asked about the target of his angry glare that reverberated through the announced crowd of 10,597.

The Phoenix (1-2) couldn’t help but feel it down to their core.

Cook, a 6-foot-9 power forward, indicated his wrath may have been directed at himself after he sat out the final 11 minutes of the first half with two fouls. He also committed six turnovers, a fact that didn’t sit well with the junior either.

“It was almost like the start of a new game for me in the second half,” Cook said. “So whenever I can get a big energy play like that for myself, I definitely use that.”

The Hawkeyes (2-0) needed Cook’s energy after leading just 47-46 at halftime. Cook nearly drew a technical foul in the first half when he sprang off the bench and raced downcourt to chest-bump teammate Nicholas Baer after his dunk brought the crowd to its feet.

“I almost got us in trouble,” a sheepish Cook said afterward.

Actually, he got Iowa out of any trouble.

Here’s what we learned from Sunday’s win.

Cook is a handful, and determined to get to the free-throw line

Cook weighs 250 pounds, 30 more than anybody who played for the Phoenix. He knew they couldn’t handle him down low. So did his Hawkeye teammates.

Cook drew nine fouls in a 77-63 victory Thursday over Missouri-Kansas City. He drew another eight Sunday, making nine of his 11 free-throw attempts. The Hawkeyes took 45 free throws as a team.

That’s what won the game.

That’s a mantra that will work all season for Iowa’s biggest threat.

“I wanted to keep feeding the post. … When you have an advantage, you need to keep going at it,” McCaffery said after scoring 11 points with three assists.

The Cook-Garza combination has been spectacular so far against smaller teams. Now it faces much bigger tests.

Iowa point guard Connor McCaffery played a big part in Sunday's win. What did he want to accomplish on offense and defense. Hear him explain: Hawk Central

McCaffery’s extended playing time allowed Jordan Bohannon to play off the ball most of the game. McCaffery and Bohannon was the backcourt of choice for Hawkeyes coach Fran McCaffery down the stretch.

Green Bay used a full-court press throughout the game and was determined to keep the ball out of Bohannon’s hands. His usage rate was just 11.5 percent as a result.

“He didn’t get worn out,” Fran McCaffery said of Bohannon. “I had to get somebody else in there to help him a little bit.”

“I think it’s a great combination because we both handle the ball,” Connor McCaffery said of playing alongside Bohannon. “He makes shots and I can take my guy off the dribble.”

Bohannon didn’t score in the first half. He had 13 points in the second, including a trio of 3-pointers.

Green Bay carved Iowa up in the opening 20 minutes, knocking down five 3-pointers while also getting loose off of dribble penetration to score 24 points in the paint. It looked a lot like last year’s Iowa defense, which was certainly a concern.

The Hawkeyes did get better in the second half, particularly on the perimeter. The Phoenix made only 2-of-17 3-pointers after intermission.

“We knew it was going to be a high-speed game. So I think in the second half we did a better job of cutting off those straight-line drives,” Garza said.

“It puts a lot of pressure on the bigs when those guards get right past. We’ve got to limit those and cut them off. Not let them get an easy drive, at least wall them off better.”

It was far from perfect. A Horizon League team scored 82 points against a Big Ten team.

But the second 20 minutes at least provided some encouragement. The Hawkeye defense, or lack thereof, will be a storyline all season long.