The Cy-Hawk elements can't be ignored, but Wednesday extends beyond that for No. 16 Iowa. It's another chance to finally show some consistency against a quality foe. 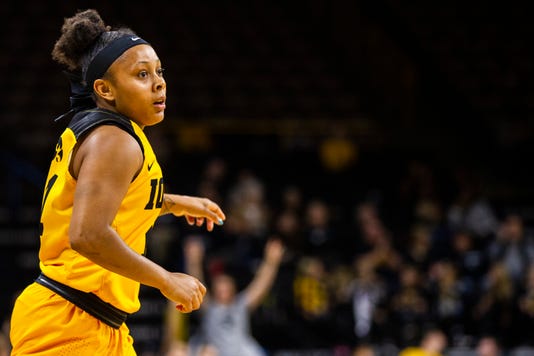 More than halfway through their pre-Big Ten schedule, the No. 16 Hawkeyes (5-2) have yet to put four quality quarters together against their tougher nonconference foes. Notre Dame and Florida State made that count on the scoreboard. Only an absurd 24-point comeback prevented West Virginia from doing the same.

Here comes chance No. 4, against a much-improved Iowa State squad from last season. A Cyclones loss to South Dakota last week kept this from being a ranked matchup, but Iowa’s chance to prove its worth doesn’t diminish.

“That next step we’re looking for is that consistency,” senior Megan Gustafson said, “especially on the defensive end. We know we’re one of the best offensive teams in the country. There’s no doubt in my mind. We’re not worried about that at all. We have so much trust and play naturally on offense. But on defense, we’ve just got to pick up that intensity.”

Sure, the Cy-Hawk buzz can’t be completely ignored. A Hawkeye victory would be three straight in the series for the first time in 20-plus years, when Iowa ripped off 10 in a row from 1982-1996. It would also guarantee a winning record against the Cyclones (6-1) for both Iowa’s senior and junior classes as well.

The two teams combine for only five Iowans — but there are some pivotal ones. Mason City’s Makenzie Meyer is the Hawkeyes’ second leading scorer (13.9 ppg) and top downtown shooter (19-for-51). Iowa City native Ashley Joens (11.1 ppg, team-high 14 treys) is perhaps the biggest freshman addition for Bill Fennelly. Des Moines Roosevelt’s Meredith Burkhall is a veteran post presence as well.

“This is now kind of becoming reflective of our Big Ten schedule, which will prepare us for the Big Ten,” Hawkeyes coach Lisa Bluder said. “Every game, you’ve got to be on. Every game, you’re preparing mentally and physically as hard as you can to get ready for that next game. And so we’re kind of in that sequence now, in my opinion, because we have the three in-state rivalry games left — and those are all emotionally charged, just like your Big Ten season is.”

Megan Gustafson on Cy-Hawk: 'I think a lot of athletes at this level kind of live for that.' Hawk Central

After Thursday’s loss in South Bend, the Hawkeyes needed to take advantage of Sunday’s get-right game between Notre Dame and Iowa State. Iowa mostly did that with a 92-63 win over Robert Morris, although the need for a complete game still came up.

The work starts exactly where you’d expect it would.

“Our confidence comes in practice,” senior Tania Davis said. “When we focus on certain things in practice, those things translate over to his game as you saw (Sunday) with the rebounds.

“I just think every day in practice if we continue to get better and continue to build our confidence on offense and defense, I think we’ll be good.”

It’ll be a juiced-up Carver-Hawkeye Arena Wednesday, as the Cy-Hawk crowd is usually a solid one in both Iowa City and Ames. The in-state aura makes this a decisive matchup, no matter the sport.

In Iowa’s bigger picture, though, a strong showing Wednesday would carry more weight than just a rivalry win.

“Just being able to have that competitive mindset, I think a lot of people have that —especially going into a game like this,” Gustafson said. “Big rivalry, good players on both teams. I think a lot of athletes at this level kind of live for that.”