The Catamounts were playing a sixth consecutive road game against a Hawkeye team with a size advantage. Tyler Cook led the Iowa assault with 18 points

Iowa coach Fran McCaffery says something happened Tuesday that may have made basketball history. Hear him explain it: Hawk Central 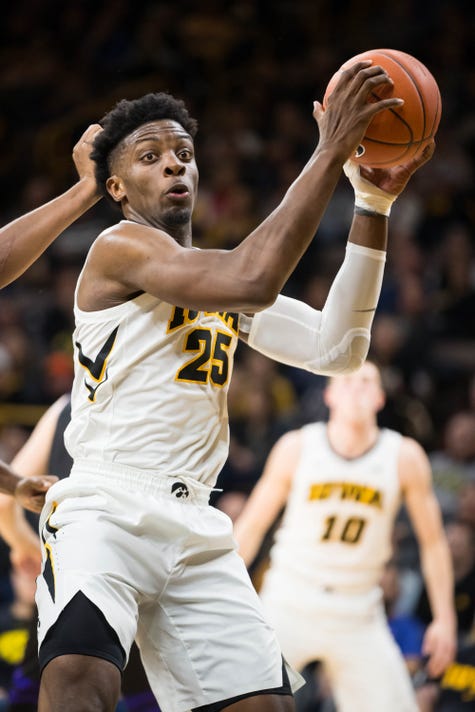 IOWA CITY, Ia. — The Iowa men's basketball team had a size advantage and a weary opponent in town Tuesday.

The result was no surprise — a 78-60 Hawkeyes victory over Western Carolina in a game that was essentially over at halftime.

Iowa pushed the Catamounts around in the paint, forced them into 26 turnovers and won a third consecutive game by double digits.

"They didn't have enough size to guard all of us," Cook said of a Western Carolina team with no player taller than 6-foot-8. "So we kind of went with whatever mismatch we had on the court. I probably should have been a little more aggressive in the first half, but we got it done."

Western Carolina (3-10), playing the sixth of seven consecutive road games, had trouble measuring up inside with the Hawkeyes, who got 22 points in the paint. When the Catamounts weren’t turning the ball over, their shooting accuracy was quite good, including 4 of 6 from the 3-point arc. 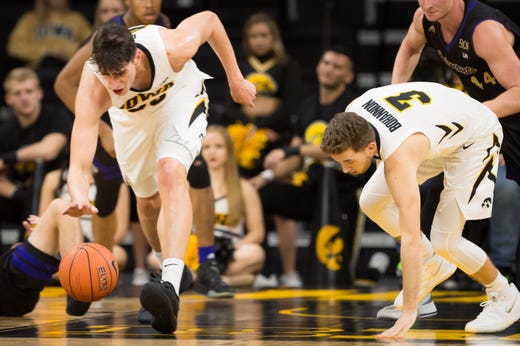 Iowa sophomore forward Luka Garza (55) scoops up the ball on the run in the second half at Carver Hawkeye Arena in Iowa City on Tuesday, Dec. 18, 2018. William J. Adams / For the Press-Citizen
Fullscreen 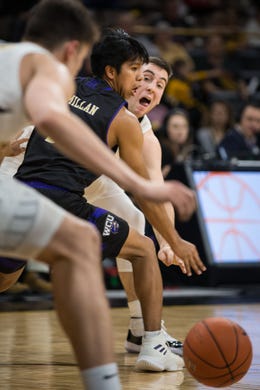 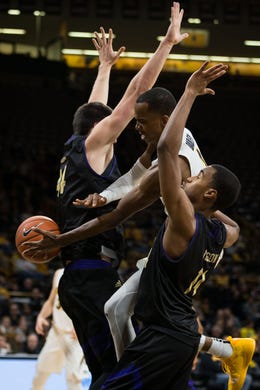 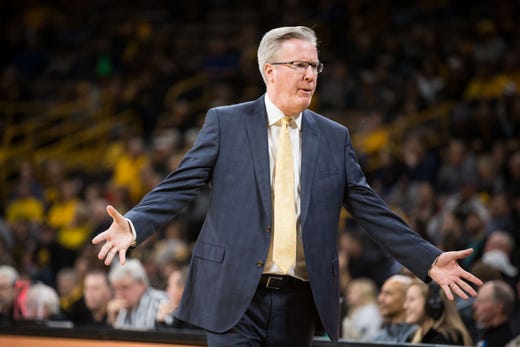 Iowa head coach Fran McCaffery addresses the Hawkeye bench in the second half at Carver Hawkeye Arena in Iowa City on Tuesday, Dec. 18, 2018. William J. Adams / For the Press-Citizen
Fullscreen 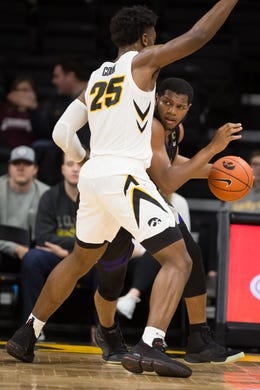 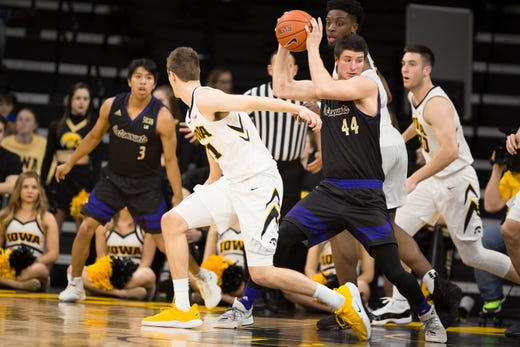 Western Carolina junior forward Adam Sledd (44) snatches the ball in the second half at Carver Hawkeye Arena in Iowa City on Tuesday, Dec. 18, 2018. William J. Adams / For the Press-Citizen
Fullscreen

Iowa sophomore forward Luka Garza (55) clambors for a shot in traffic in the second half at Carver Hawkeye Arena in Iowa City on Tuesday, Dec. 18, 2018. William J. Adams / For the Press-Citizen
Fullscreen 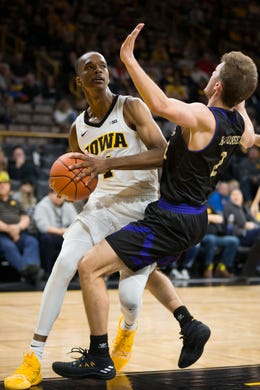 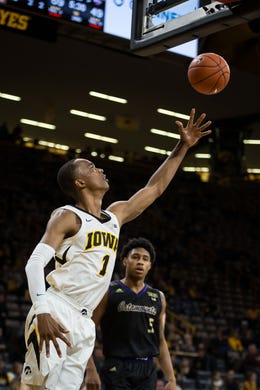 Iowa junior guard Maishe Dailey (1) shoots a layup in the second half at Carver Hawkeye Arena in Iowa City on Tuesday, Dec. 18, 2018. William J. Adams / For the Press-Citizen
Fullscreen 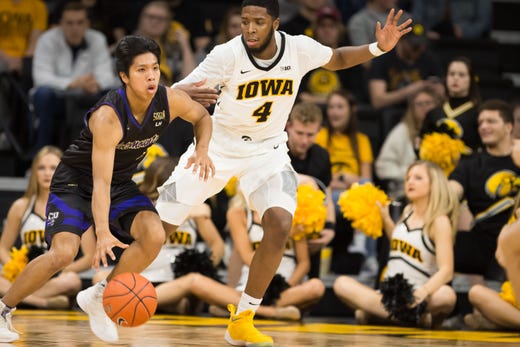 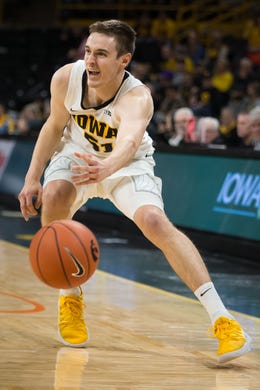 Iowa senior forward Nicholas Baer (51) pops a bounce pass in the second half at Carver Hawkeye Arena in Iowa City on Tuesday, Dec. 18, 2018. William J. Adams / For the Press-Citizen
Fullscreen 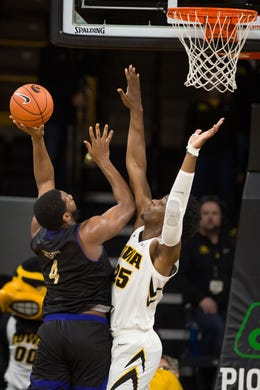 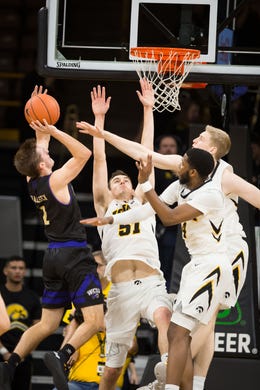 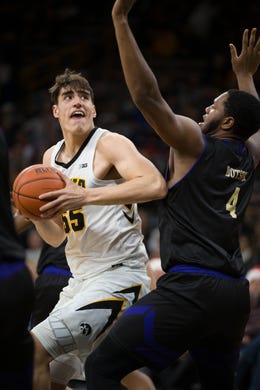 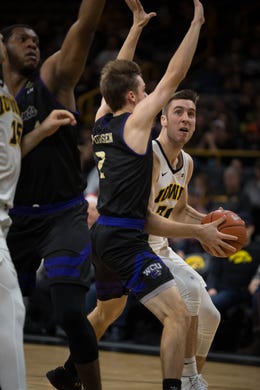 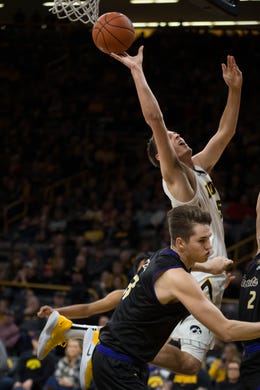 Iowa senior forward Nicholas Baer (51) reaches for a layup in the first half at Carver Hawkeye Arena in Iowa City on Tuesday, Dec. 18, 2018. William J. Adams / For the Press-Citizen
Fullscreen 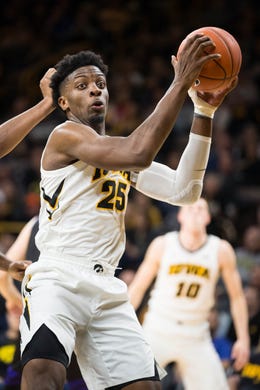 Iowa junior forward Tyler Cook (25) drives against Western Carolina in the first half at Carver Hawkeye Arena in Iowa City on Tuesday, Dec. 18, 2018. William J. Adams / For the Press-Citizen
Fullscreen 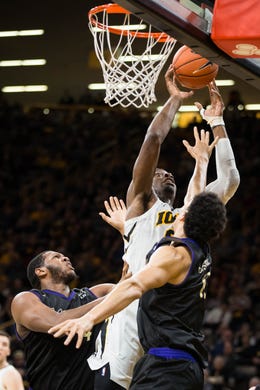 Iowa junior forward Tyler Cook (25) jumps for a layup in the first half at Carver Hawkeye Arena in Iowa City on Tuesday, Dec. 18, 2018. William J. Adams / For the Press-Citizen
Fullscreen 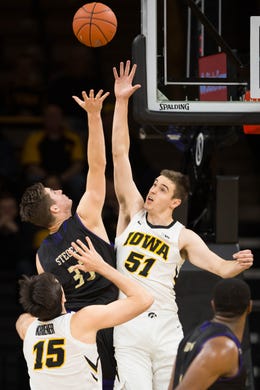 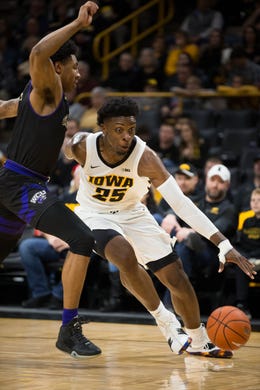 "It was a strange game. I don't remember ever going in at halftime where a team shot 65 percent, 66 percent from 3 and we were up 19. I don't think that's ever happened before — maybe in the history of basketball," Iowa coach Fran McCaffery said. "So the fact that we turned them over 15 times was important because we got some opportunities to score out of that. And in the second half, we were 1-for-10 from 3, 33 percent from the field and still win by 18. So I thought we fought."

The Hawkeyes built a 65-38 lead midway through the second half before hitting a lull.

"Coach really got mad at us in the timeout, and I think we kind of had to re-focus right there at that point. And we came out and I think we did really well the rest of the game," Garza said. "At that point, he's not coaching us to win the game anymore — we've pretty much got that done. He's trying to improve and get better and make sure we're going out there and we're giving it our all."

The only damper on the evening for the Hawkeyes was an ankle sprain suffered by junior center Ryan Kriener and a shot to the head late in the game for freshman guard Connor McCaffery. Kriener said his ankle will be fine, and that he could have returned to the game if needed.

McCaffery was dizzy after the game and getting treatment. Fran McCaffery, his father, was hopeful that it was not a concussion.

Iowa forward Tyler Cook isn't disappointed in Tuesday's game, but he does see room for improvement. Listen in: Hawk Central

Pemsl has surgery, will miss the season

Iowa junior forward Cordell Pemsl did proceed with season-ending knee surgery. The procedure to remove a brace and five screws from his right knee happened Tuesday afternoon. The hardware was left in his knee after a previous surgery and was causing pain.

Pemsl played in only two games this season, including a memorable 16 minutes in the Dec. 6 win over Iowa State. He sat out Saturday’s victory over Northern Iowa. He qualifies for a medical redshirt and will have two years of eligibility remaining.

“I tried to give playing this season another shot in the Iowa State game, but after a week of rest and recovery, the chronic irritation caused by the hardware has remained, resulting in my inability to play in Saturday’s game versus UNI. After further discussions with the medical staff, we determined that the best course of action is to correct the problem at this time,” Pemsl said in a university news release.

The native of Dubuque has played in 68 career games, averaging 7.2 points and 4.7 rebounds.