Iowa is hosting bottom-tier opponents but drawing lessons that can be applied when league play resumes. Western Carolina's Dotson was a case in point 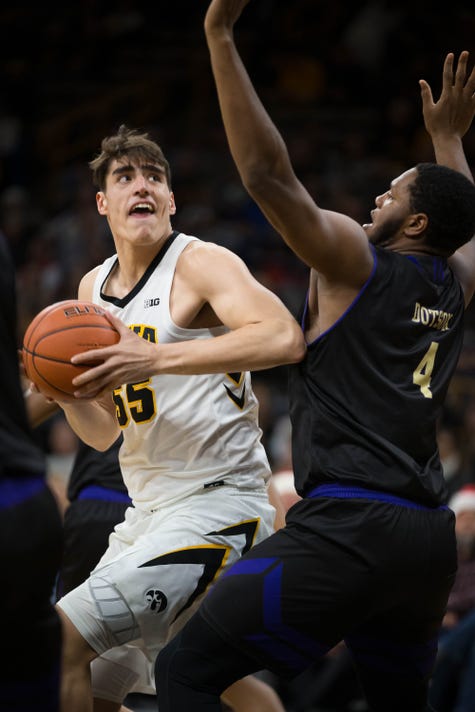 But it was interesting to hear Hawkeye men’s basketball players reference upcoming Big Ten opponents when discussing their 78-60 victory over Western Carolina at Carver-Hawkeye Arena. It’s obvious that, in preparing to play three teams on the bottom rungs of Division I, Iowa is really focusing on the 18 scheduled games that will follow.

Case in point: Iowa centers Luka Garza and Ryan Kriener were asked about the defensive gameplan against Catamounts forward Carlos Dotson, who stands 6-foot-7 at 265 pounds.

“We’ve got a couple of guys like that in the Big Ten, like Kaleb Wesson of Ohio State (who is 6-9, 270),” Garza said. “We had a really big focus of trying to send double-teams at him, when to send them, and try to body him, not let him get to his left hand.”

Kriener expanded on that thought.

“That’s why we doubled (Dotson) early, because we’ll do that with some other bigs in the Big Ten,” he said. “That’s kind of how you need to defend in the Big Ten.”

Kriener said the No. 21 Hawkeyes (9-2) are approaching these four games against lower-level opponents as valuable learning opportunities, even if they end up being lopsided victories as expected. The Hawkeyes beat Northern Iowa 77-54 on Saturday.

“UNI plays a pack-line defense like a Michigan,” Kriener observed.

Up next is a noon Saturday home game against Savannah State. Bryant comes to town Dec. 29. Then it’s strictly Big Ten play for a Hawkeye team trying to get back to the NCAA Tournament for the first time in three years.

“Coach (Fran McCaffery) is a smart guy. He scheduled these games for a reason,” Kriener said.

Clamping down on 'crafty wide-body' Dotson

Dotson is Western Carolina’s leading scorer and the obvious focal point of Iowa’s gameplan. He fouled out with 10 points and eight rebounds, all defensive. He turned the ball over six times and had two of his shots blocked. He finished the evening minus-22 in his 29 minutes of play, the worst player in the game in that category.

“The crafty wide-body guys that go off either shoulder and have the up-and-under stuff, the reverse layups, soft touch, soft hands, can dribble it. So he doesn’t have to post up on the block,” McCaffery said.

“Those guys are tough to guard because you’ve got to keep sliding your feet. You’ve got to stay vertical. They’re hard not to foul. And we made him miss.”

Dotson got to the free-throw line only once.

“I think we did a good job rotating down, getting some blocks,” Garza said. “We have the height advantage, and we’re trying to defend the paint and make sure teams aren’t getting into the lane and scoring easy on us. We want to make every shot contested. If we block it or if we just change the shot and make him throw it off the backboard.”

It was a second consecutive game in which the Hawkeyes kept the opposing team’s best player off stride. On Saturday, Northern Iowa guard A.J. Green was limited to two points on 1-for-8 shooting.

Will Hawkeyes have enough bodies for practice this week?

Before the game Tuesday, Iowa announced that forward Cordell Pemsl had surgery on his right knee and will join Jack Nunge and C.J. Fredrick on the redshirt path.

Forward Riley Till was in a large walking boot and has a sprained ankle, McCaffery said.

During the game, Kriener went out with an ankle injury of his own, and backup point guard Connor McCaffery took a hit late and was feeling dizzy afterward. Kriener later said he should be fine to play Saturday.

The Hawkeyes had Wednesday off. But finding enough bodies for productive practices Thursday and Friday could be problematic.

“That’s why we have walk-ons, so we can still go up and down. Because we’ve got to be able to simulate the style of play that Savannah State employs, which is different,” McCaffery said. “You’ve got to be careful. You can’t push them too, too hard when you’re down numbers. So we’ll show a lot of film. We’ll get some shots up. We’ll do what we can.”