Iowa women's basketball: What we learned from the Hawkeyes' 71-53 win over Wisconsin

Iowa took control late in the third quarter and picked up a must-have home win.

Iowa women's basketball: What we learned from the Hawkeyes' 71-53 win over Wisconsin 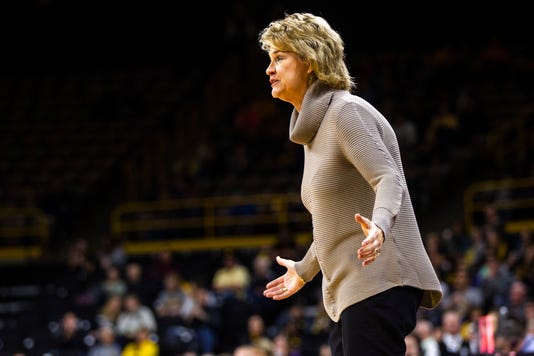 IOWA CITY, Ia. — It took about three quarters for them to firmly put it away, but the Hawkeyes eventually did what was needed in a must-have home game.

With two tough road games upcoming, No. 17 Iowa couldn’t waste Monday’s Carver-Hawkeye Arena showdown against a beatable Wisconsin squad. Holding down home court is always pivotal — but even more so in conference play. The Hawkeyes didn’t disappoint with a 71-53 win.

Iowa (11-3, 2-1 Big Ten Conference) controlled things most of the way, but an 11-0 run midway through the third quarter turned a modest eight-point lead into a 51-34 advantage. That surge provided enough cushion the rest of the way.

Megan Gustafson got hers per usual — 21 points and 12 rebounds — but Iowa had contributions elsewhere. Buoyed by a swift start, Kathleen Doyle finished with 15 points on 5-for-13 shooting. Makenzie Meyer (10 points) got going a little bit as well.

Iowa now hits the road for two straight — at Purdue on Thursday and at No. 18 Minnesota next Monday. The Hawkeyes will feel better about those treks after Monday’s showing.

"To be able to have those two home (conference) wins right now is really important," Gustafson said, "and to have that momentum, going into two tough environments with Purdue and Minnesota after that — I know we're really excited to get back at it."

In a similar spot Thursday with a nice lead after three quarters, the Hawkeyes sputtered down the stretch before holding off Nebraska, 77-71. Missed free throws and defensive breakdowns let the Huskers hang around. Lisa Bluder preached the need to learn lessons even in a win.

It wasn’t the most emphatic fourth quarter against the Badgers, but Iowa performed much better with a double-digit lead. There was never a feeling that Wisconsin was slithering back into a game it had no business being in.

Give Iowa credit for a better finish.

Her stat line doesn’t necessarily jump off the page — 4-for-7, 2-for-4 from deep — but Meyer’s night was a welcome sight given her recent struggles.

Her four field goals are the most since going 5-for-11 against Robert Morris on Dec. 2, and Meyer’s two treys were only two fewer than what she put up in the previous six games combined. She had missed her last eight downtown attempts coming in.

Meyer’s offensive game is a huge boost when it’s clicking, and the Hawkeyes will need it as they navigate Big Ten play. Perhaps Monday was a minor breakthrough.

"It's really tough, as a shooter (to go through a slump)," Meyer said, "but I have so many people who are confident in me. I just have to remember to be confident in myself, and that can be a weakness sometimes.

"But when I have people building me up every day, it makes it a lot easier."