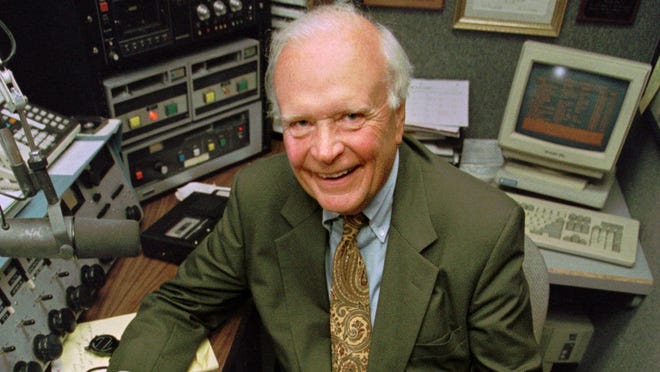 The world was engulfed in war, but high school football games were still being played in Iowa. It’s just that there was a shortage of people to broadcast them.

A radio station called Franklin High School in Cedar Rapids, wondering if anybody in its speech class might be interested in a Friday night gig.

By the time Brooks died June 25, 2016, at age 89 — working right up until the end — his gravelly but genteel voice was among the most recognized in the state’s history. He was a pioneering sportscaster whose career lasted so long that he was also the last of his kind — someone who never tried to hide his allegiance to his beloved Iowa Hawkeyes on-air and who earned the admiration of athletes, coaches and fans far and wide for that reason.

“Sports to him was about people and that’s what drove him into the business and I think kept him in it,” said Rob Brooks, who followed his father into that business.

Brooks is being honored as the 229th member of the Des Moines Sunday Register’s Iowa Sports Hall of Fame.

After that impromptu high school job, Brooks enrolled at the University of Iowa to study broadcasting, working for the university’s WSUI. He graduated in 1948 and went on to a 68-year career in radio and television, primarily with KCRG. He was the voice of Iowa Hawkeye basketball and football games. He was big enough to converse freely with famous sporting figures like golfer Gene Sarazen and Olympic track star Jesse Owens, but never too big to show up at myriad high school events throughout the state.

Rob Brooks, the radio voice of Iowa women’s basketball games, said he still has people come up to him and tell him that one of the great honors in their lives was to be interviewed by his father after some long-ago prep sporting event.

Brooks was recognized as Iowa’s Sportscaster of the Year 10 times. He was inducted into the College Football Hall of Fame in 2004. In 2011, his name was attached to the press box at Kingston Stadium in Cedar Rapids, where high school football games are contested.

That’s how broad his reach was.

“He was brought up in an era where he was more than a journalist. He was a friend. He wanted you to succeed just as much as he wanted himself to succeed. If a coach said something about a player, that was between him and the coach. Nowadays, that would be on the Internet immediately,” said Phil Haddy, who started his career interning with Brooks at KCRG before spending 42 years in the Sports Information Department at Iowa.

It was Brooks who helped him land that job. They shared a hometown and a lifelong friendship.

The voice of Iowa men's basketball reaches into every living room

At the height of Brooks’ broadcasting career, in the 1960s and ‘70s, he was the conduit between legions of Hawkeye fans and men’s basketball teams led by the likes of Ralph Miller and Lute Olson. Games were rarely televised back then. Winter Saturday nights were spent listening to Brooks spell out all the action from university towns around the Midwest.

His own family would do the same.

“Those guys back then were iconic figures in the state of Iowa,” Rob Brooks said, including his father and the late Jim Zabel. “My mom (Susie) and I would have dinner and flip on the game at 7 o’clock and just sit around the kitchen table listening, just like everybody else.

“You look back at it and it was strange to hear your father’s voice like that. But it was just part of it. I didn’t know any different.”

Brooks was famous for always wearing a suit topped off with a fedora, and for carrying a bulky tape recorder that he never wanted to replace, even as technology advanced. Any interview about Brooks inevitably includes the word “gentleman.”

And that commanded respect.

'Nobody’s going to say no to him. He looked a little elderly even when he wasn’t.'

Haddy, who made many road trips with Brooks, recalls a football excursion to Champaign, Illinois, during which the fastidious broadcaster was not going to be denied his usual breakfast. The waitress at the restaurant that morning told him they were done serving that particular meal.

“He says, ‘Well, why don’t you check with your guy, see if he can just throw me on two eggs?’” Haddy said.

The waitress returned with affirmation that that could be done.

“As long as he’s doing that, can he throw in two or three strips of bacon?” was Brooks’ next request.

“She went back four times. By the time she was done, he had eggs, bacon, toast, hash browns and everything in a breakfast,” Haddy said, laughter rising out of him.

“Nobody’s going to say no to him. He looked a little elderly even when he wasn’t.”

Brooks was always on the clock. As a young man, he nabbed an interview with baseball legend Jackie Robinson in the visitors’ dugout at Wrigley Field. Three decades later, Rob Brooks remembered his father following tumultuous New York Yankees slugger Reggie Jackson into a private room before a game in Kansas City and emerging with an exclusive.

Bob and Rob Brooks were on a spring break golf outing in the Ozarks in 1986 when word came over the radio that Iowa men’s basketball coach George Raveling had retired. What happened next was vintage Bob Brooks.

“I could just kind of see it in his eye, ‘OK, something’s going to happen here.’ There’s no way he’s going to let this story go without doing something,” Rob Brooks said.

His father spotted a Dairy Queen, walked inside and found what he was looking for – a pay phone. He had no script, but he called his radio station KHAK in Cedar Rapids to file a live report.

“I’m just looking at these people staring at him,” Rob Brooks said of the long line of customers. “’What is this guy doing?’ They thought he’d lost it or something.

“He would do a report from anywhere. A team bus. A golf course. A pay phone on the street corner. Anywhere. You learned a lot from him. When something strikes, you’ve got to go at it.”

Haddy has no doubt what Brooks’ legacy is in the state he called home for 89 years.
“When you talk about the greatest sportscaster in the history of Iowa, I think you’ve got to talk Jim Zabel and you’ve got to talk Bob Brooks. The thing that made them so special in my eyes was that they were such big Hawkeye fans. Nobody wanted us to win more than they did. And no one took it harder when we lost,” Haddy said.

“I’m just honored to say that I held a little corner in his life. And he held a big corner in mine.”