Iowa's sophomore center knows he doesn't have elite physical skills, so he makes up for it by working hard and being aggressive. It's working.

IOWA CITY, Ia. — Luka Garza will not beat you in a race. This statement is no secret to Iowa’s sophomore center, or to his teammates.

Garza is not fast. He’s not a leaper. He even describes himself as unathletic.

But put him on a basketball court, with an errant shot bouncing off the rim or an opponent to outhustle down the court, and you quickly see the value Garza brings to the Hawkeyes.

“He’s super aggressive on the glass in terms of getting his position. … There’s not many guys who work as hard as he does,” Iowa forward Tyler Cook said of his fellow low-post player. “Even though he may not be athletic, he gets a lot of rebounds over guys that are more athletic than he is.” 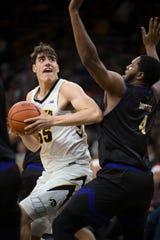 Iowa center Luka Garza averages 12.6 points not because he's a physical specimen, but because he outworks opponents. His next chance comes Saturday against Ohio State star Kaleb Wesson. (Photo: William J. Adams / For the Press-Citizen)

Garza averages 12.6 points and 4.6 rebounds for the No. 25 Hawkeyes (13-3, 2-3 Big Ten Conference). He provides more than that with his sheer passion for his sport, a trait his teammates rally around. That much was evident in the second half of Wednesday’s 73-63 win at Northwestern, when Garza pummeled the Wildcat post players, drawing nine fouls and making 10 free throws in an inspiring performance.

Garza’s about to face another big test when No. 17 Ohio State (12-3, 2-2) comes to Carver-Hawkeye Arena for a 1:30 p.m. game Saturday (BTN). The Buckeyes are led by 6-foot-9, 270-pound center Kaleb Wesson, who averages 17.1 points and 6.9 rebounds. Garza is two inches taller but 25 pounds lighter. Both are sophomores, whose battles date back to their AAU days.

Garza has been looking forward to this matchup all season. Wesson’s Buckeyes handed the Hawkeyes two double-digit defeats a year ago. Garza had 23 points and 10 rebounds in those games.

“I’ve just always gotten around it by playing hard and smart. There are different ways you can create your shot, angles, different stuff like that that gets around the lack of ability to bounce off the floor,” Garza said of tangling with athletes who are more physically gifted than himself. “While guys are running 70 percent, you’re running 100 percent all the time. That helps you stay with the pace or even get ahead.

“It would have been nice to be able to put (the basketball) between my legs and dunk it. But I just love playing the game, so it doesn’t matter if I’m athletic or not.”

Garza should get some help Saturday. Cook, who Wednesday’s game with a sore right knee, said he’s confident he’ll be back for some court time against Wesson and company.

“TC’s our leader on both ends, so we obviously need him. … We all stepped up last game, but that’s going to be hard to keep it going without our best player,” Garza said of Cook, who leads the Hawkeyes with 17.3 points and 8.3 rebounds per game. “It creates a hard matchup for them, because a lot of teams don’t have two bigs like we do. So when they put Kaleb Wesson on me, they’re putting a smaller ‘4’ on him. So that’s a big advantage for our team to pound it inside and create our inside-outside game.”

At 6-9, 250 pounds, Cook may be better equipped to handle Wesson’s skill set, which includes shooting range you don’t often see from a player his size.

But Garza will be needed to help on that front, too. As will 6-9 center Ryan Kriener.

“You've just got to work when you're guarding Wesson the entire possession. You can't relax and then decide, ‘OK, they might bring it to him now, so I'd better get up, get over,’” Iowa coach Fran McCaffery said. “You have to be thinking the whole time, ‘Where is the ball? Where is he? What action is coming my way?’ Because sometimes they post him, sometimes they screen for him, sometimes he screens in post. You have to figure all that out on the floor.”

Garza is good-natured about his lack of athletic prowess. He’ll even bring it up in interviews without being asked.

It’s similar to Hawkeye teammate Jordan Bohannon. The junior point guard is five points away from scoring 1,000 in his career, but doesn’t have any elite physical skill.

Bohannon said he and Garza have a shared background, even though one player is 10 inches taller than the other.

“Working hard’s always going to trump being gifted when your born.”