In the blink of an eye, No. 21 Iowa gets steamrolled by Michigan State to snap win streak

The Hawkeyes were enjoying an eight-point, second-half lead while Carver-Hawkeye Arena rejoiced; within minutes, it was a 14-point deficit. Game over.

In the blink of an eye, No. 21 Iowa gets steamrolled by Michigan State to snap win streak

Iowa forward Nicholas Baer was worried about a scoring drought against Michigan State. That's exactly what happened. He explains why: Hawk Central

IOWA CITY, Ia. — Iowa blinked, and was quickly on the brink.

The No. 21 Hawkeyes had an eight-point lead and a home crowd sensing a big upset Thursday.

No. 5 Michigan State found an extra reserve of intensity. The Hawkeyes couldn't match it. Within minutes, the game was essentially over.

The Spartans used a 24-2 burst to breeze past the Hawkeyes 82-67 at Carver-Hawkeye Arena. The suddenness of the change in fortunes was enough to induce whiplash. 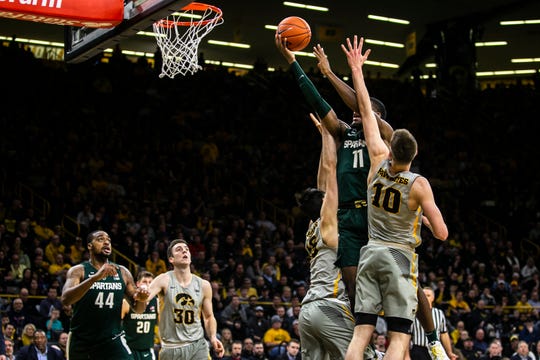 “Michigan State does a phenomenal job of turning bad shots or turnovers into layups at the other end. So I thought they were able to get their running game going,” Iowa forward Nicholas Baer said. “And I think we have to do a little better job of understanding when a team’s on a run, then maybe we have to grind it for a longer possession.”

Iowa (16-4, 5-4 Big Ten Conference) was looking to extend its winning streak to six games, with the Spartans potentially providing the most impressive victory of the season. The Hawkeyes were ahead 50-42 after Tyler Cook scored 11 points in the first 4 minutes of the second half. A crowd announced at 14,416 was going berserk.

Michigan State point guard Cassius Winston was the catalyst. He scored 23 points, with seven assists. His trio of 3-pointers in the second half were each more punishing than the last. He was by far the best player on the court, especially when the outcome was still in play.

Iowa guard Jordan Bohannon had a couple of 3-pointers go in and out early against Michigan State. Hear him talk about a tough shooting night: Hawk Central

“That kid is a special player. He keeps his dribble, he looks for people and he kind of picks his spots, when to shoot the ball,” Iowa coach Fran McCaffery said of Winston, who leads the Spartans in both scoring and assists. “He makes big shots in very important situations. He's really consistent at doing that and controlling the game. Th's why they're where they are, and you've got to give him credit for that.”

Michigan State has won an incredible 21 consecutive Big Ten regular-season games, 12 of them on the road. The Spartans were undaunted while the Hawkeyes hit a dry spell that sealed their fate.

“I think that’s when we’ve got to lock in the most,” Iowa center Luka Garza said of his team’s hard-fought eight-point lead. “They started to get second-shot opportunities, tipouts. When you give a team like that two, three chances at it, they’re going to score. Then they started to run at us. We weren’t able to put it together in transition. That was frustrating. That was our whole game plan to stop that. And we weren’t able to do that in that stretch.”

The Spartans outrebounded Iowa 42-26. They made 18-of-27 shots in the second half after trailing 35-31 at intermission.

There was a stretch when Iowa was outscored 29-7. Garza had all seven of those points. He finished with a team-high 20, his third consecutive game reaching that mark.

But the Hawkeyes missed 10 of their 11 3-point attempts after intermission. They shot only eight free throws to Michigan State’s 21. There is no way to erase a large lead when those two things happen.

“When we’re not able to get great shots, we kind of start their break for them in a sense,” Cook said. “Once you’re playing confidently, shots start falling. And I think that’s what happened to them.

Cook scored only two points in the final 16 minutes to finish with 17. Baer had eight of his 10 in the first half.

Michigan State has beaten Iowa 13 of the last 15 times they’ve met. That includes a 90-68 drubbing in East Lansing on Dec. 3. This one was more competitive than that, but only for 24 minutes.

Iowa next plays at Minnesota at 4 p.m. Sunday.