No. 20 Iowa preparing for the 'good' version of Indiana now that Hoosiers are healthy

Hawkeye coach and players say look past that seven-game losing streak the Hoosiers went through; two important players are back now.

No. 20 Iowa preparing for the 'good' version of Indiana now that Hoosiers are healthy

Iowa coach Fran McCaffery is thrilled to be linked with the legendary Lute Olson. Hear what the two have talked about over the years: Hawk Central

IOWA CITY, Ia. — The Indiana men’s basketball team saw its record go from 12-2 to 12-9 in a January freefall that dropped the Hoosiers from the Big Ten Conference title conversation.

February arrived with an overtime upset win at Michigan State, however. And Iowa coach Fran McCaffery and his players are convinced they’re going to see the excellent version of the Hoosiers when they meet at 8 p.m. Thursday in Assembly Hall.

The losing streak occurred while 6-foot-10 forward Da’Ron Davis and shooting guard Devonte Green were nursing injuries, the Hawkeyes were careful to point out at a Tuesday news conference. The two juniors are back in the fold now, and played important roles in that 79-75 Saturday win in East Lansing, Michigan.

“If they had those two guys, I think those seven games would have been really different,” Iowa center Ryan Kriener said. “They’re healthy now, so you have to really treat them like the 12-2 team they were.”

That’s what No. 20 Iowa (17-5, 6-5 Big Ten) intends to do as it seeks to even its road record at 3-3. The Hawkeyes have lost games at the three big arenas they’ve traveled to — Michigan State, Purdue and Minnesota. Their two wins were at Northwestern and Penn State, a pair of teams that have never enjoyed much of a homecourt advantage.

Assembly Halls holds 17,222 and has been sold out in seven of 12 games this season. Indiana is 10-2 there this winter. 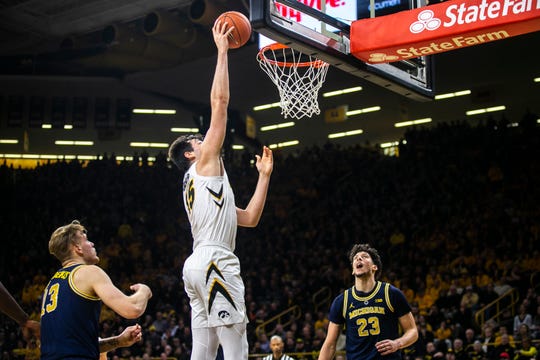 Iowa center Ryan Kriener, here scoring against Michigan on Friday, cautions fans to overlook Indiana's recent seven-game losing streak. He says the Hoosiers that the Hawkeyes are facing Thursday are back to full health and resemble the team that got off to a 12-2 start. (Photo: Joseph Cress/Iowa City Press-Citizen)

Kriener was sitting out with a concussion last year when the Hawkeyes lost at Indiana.

“It got so loud that I had to leave,” he said of the crowd.

Indiana may be 13-9 and 4-7 in league play, but this figures to be a major challenge for the Hawkeyes, which are coming off their best win of the season, at home Friday against then-No. 5 Michigan.

“They were 12-2 when they were healthy, beat Louisville,” Iowa coach Fran McCaffery said of the Hoosiers. “(They) go on the road and beat Michigan State. That's who we're playing.”

McCaffery said there’s no mystery behind Iowa’s wins at Northwestern and Penn State. The Hawkeyes had to overcome second-half deficits in each.

“When the game was in the balance, we made good decisions and we fought on the glass and got the stops we needed,” he said.

“I thought we showed some toughness.”

That’s what will be needed Thursday, as well. It’s a chance for the Hawkeyes to quiet a raucous crowd for the first time this year.

Indiana has the top-scoring freshman in the Big Ten in NBA prospect Romeo Langford. He averages 17.4 points per game. Iowa’s rookie star, Joe Wieskamp, has seen Langford up close and came away impressed with his smooth play.

Wieskamp, who is averaging 11.4 points and has won Big Ten freshman honors in two of the past three weeks, was a teammate of Langford’s at an NBA development camp back in the day. Wieskamp had to sit that one out because of mononucleosis, but was in team meetings with Langford and studied the 6-6 guard.

“You can tell it’s going to translate to the NBA,” Wieskamp said of Langford’s skills. He is a projected lottery pick.

The Hoosiers are led by senior forward Juwan Morgan, who averages 15.9 points and 8 rebounds. Cook, a junior, is a friend. Both are from Missouri and their head-to-head battles date back five years.

Cook declined to say Tuesday who has gotten the better of those matchups. But he did have 28 points the last time the teams met, an 84-82 Indiana win in Iowa City last February. Morgan scored 12 in that one.

Morgan missed the second half and overtime of Indiana’s victory Saturday after a shoulder injury. Cook was quick to reach out.

“I wasn’t necessarily worried about our game. I texted him to make sure he’s OK,” Cook said. “I’m pretty sure he’ll be ready to go.”

Morgan has returned to practice this week.

McCaffery proud to be linked with Olson

Iowa’s win over Michigan was the 168th of McCaffery’s nine years here. That tied him with Hall of Fame coach Lute Olson for second-most in program history.

Olson, now retired, was one of the first people McCaffery reached out to after getting the job. They played a round of golf together and talked about what it was like to coach at Iowa.

“The thing that I think was most impressive to me was he loved it here. Obviously, he left and had a great experience at Arizona (winning a national championship in 1997), but he always appreciated the people here,” McCaffery said of Olson.

“(He) set a great standard for how to be not only a great coach but a terrific person — somebody that I would emulate and take advice from. So any time you're mentioned with him, that's a tremendous feeling.”