Iowa forward Tyler Cook knew he was a one-man band in the post Thursday when teammates got into foul trouble. Hear him explain how he handled that: Hawk Central

BLOOMINGTON, Ind. — Before Jordan Bohannon owned the final 91 seconds, it was Tyler Cook who was the key figure in No. 20 Iowa’s 77-72 victory over Indiana on Thursday.

Cook set the tone with a forceful move that resulted in the opening basket of the game. His dunk gave the Hawkeyes the final points of the first half and a 46-36 lead. More importantly, it was his five-point burst that pushed the Hawkeyes (18-5, 7-5 Big Ten Conference) back to a comfortable lead after Indiana had moved within 31-29. And three times in the second half, Cook answered when the Hoosiers had cut Iowa’s lead to seven points or fewer.

Cook, a junior power forward, finished with 21 points, seven rebounds and four assists. Despite (or because of) constant aggressive double-teams by Indiana. Despite foul trouble that limited fellow Hawkeye post players Luka Garza and Ryan Kriener to six points in 26 minutes of playing time.

Cook played a team-high 37 minutes. He was the leader Iowa needed him to be to earn a third road win in Big Ten play.

“I always try to stay aggressive, especially in those kind of moments when I know we need stops and scores. I just try to make myself as available as possible to my teammates,” said Cook, who was 9 of 17 from the field. “I was able to get a few of them to fall.”

Cook knew the double-teams were coming. He’d seen it on film. He welcomed them. Three of his assists came early. The final one resulted in a Bohannon corner 3-pointer that put Iowa ahead 69-63 and started the point guard’s 91-second burst. 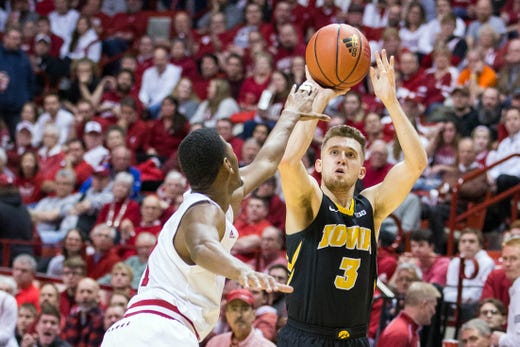 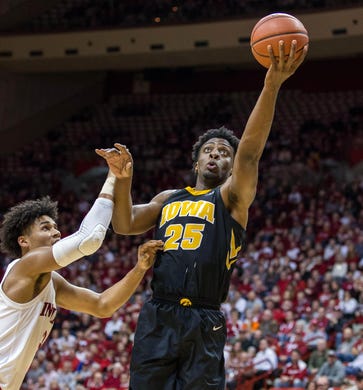 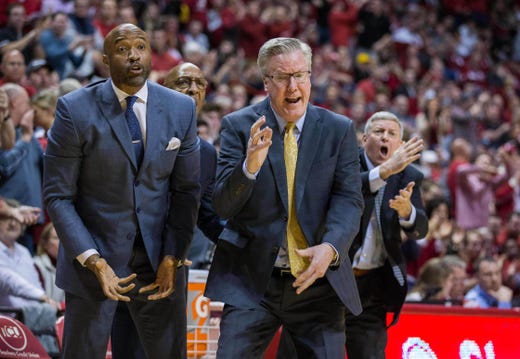 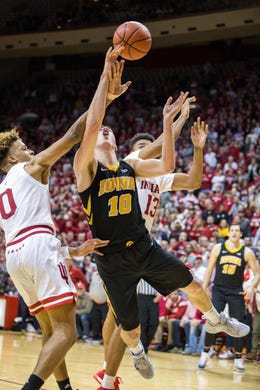 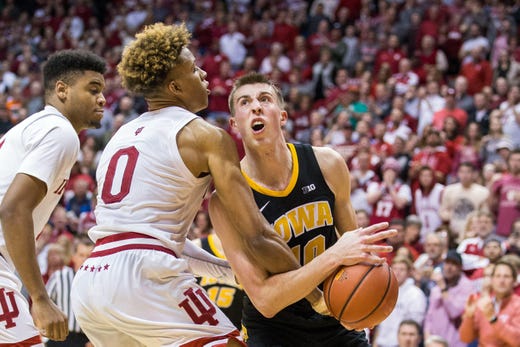 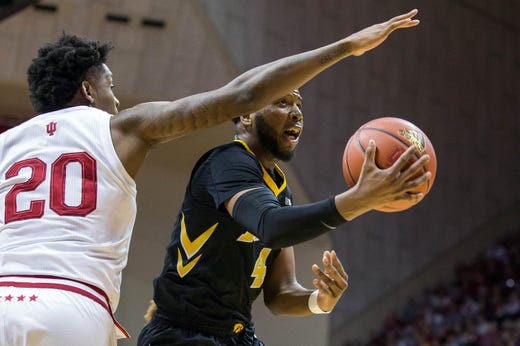 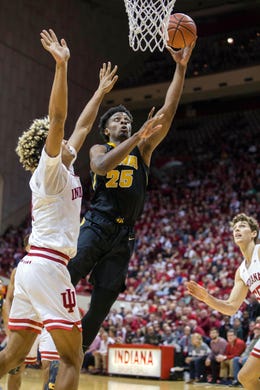 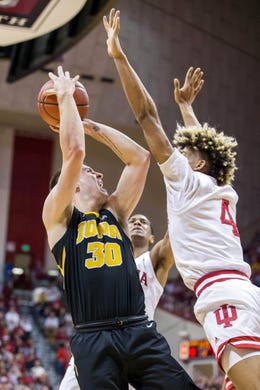 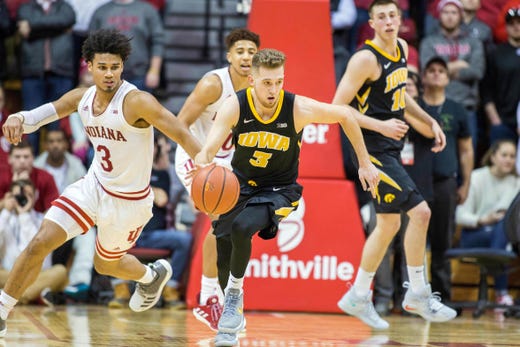 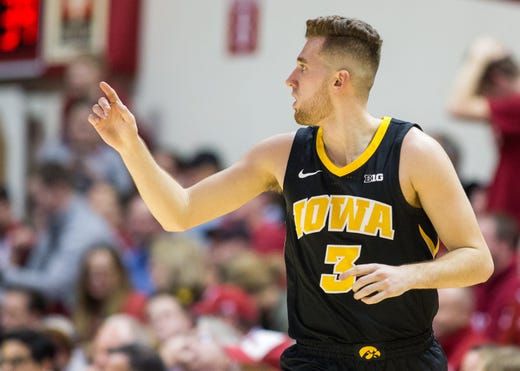 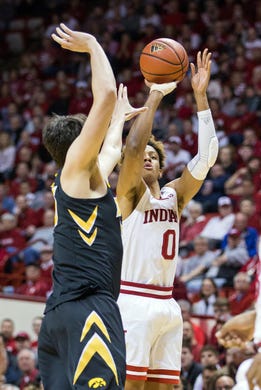 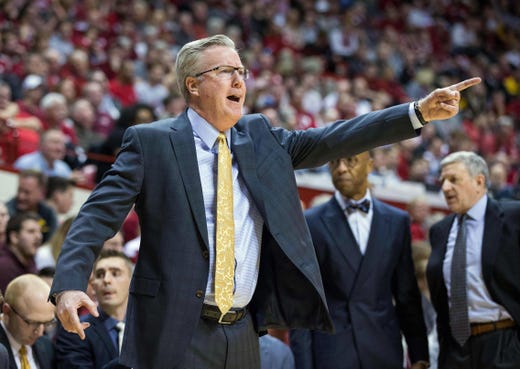 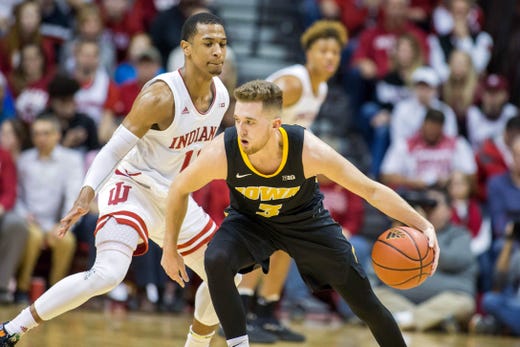 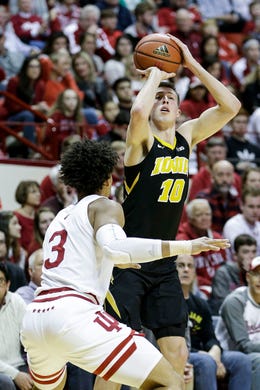 Iowa forward Joe Wieskamp rises up for one of his four first-half 3-pointers Thursday, this one over Indiana's Justin Smith. AJ Mast, AP
Fullscreen 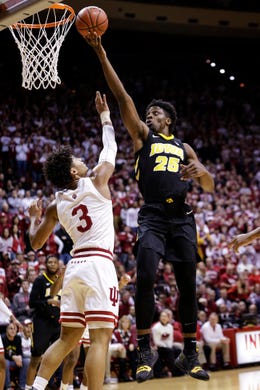 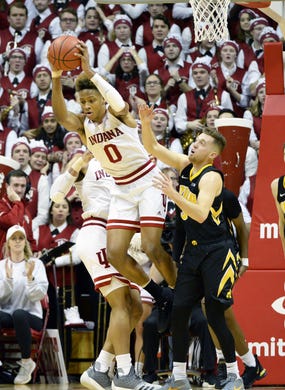 “I just knew that I was going to be able to find guys and the double-team would eventually leave. And so I just tried to stay patient in that situation, not get rattled or anything and try to make plays out of the double-team,” Cook said.

“I don’t feel like I have to shoot the ball. When they’re doubling me I’m almost excited because I know someone is open.” 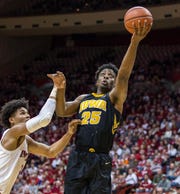 There were also times in the first half when Cook made smart reads and began his move before the second defender could arrive. He had 13 points in the opening 20 minutes, drawing four fouls in the process. He was too much for Indiana to handle most of the game.

“He’s playing the game at his pace right now, but he’s also really quick and really powerful. It’s a lethal combination,” Iowa coach Fran McCaffery said. “Sometimes he gets in trouble when he goes too fast. (Thursday) he used his quickness and he played at his pace.”

In Iowa’s Feb. 1 victory over Michigan, Cook scored only seven points in 26 minutes. Garza and Kriener took control down low. On Thursday, there was no way the Hawkeyes were winning unless Cook showed up in a big way. Give the big man his due.

Iowa's 2-3 zone is the winning combination

The Hawkeyes, as they typically do, opened the game playing man-to-man defense. Indiana ate it up, scoring 15 points in 5 minutes, 27 seconds and forcing McCaffery to call a timeout. Garza was visibly fatigued already. Guard Isaiah Moss was among those not fully engaged in transition defense.

Iowa practices multiple defenses constantly, Tyler Cook said afterward. So the players are always ready for things to get switched up. And that’s what happened.

McCaffery went to a 2-3 zone against a Hoosier offense that shoots just 32.8 percent from the 3-point arc. That’s exactly what Indiana shot against Iowa, making 7 of 21.

“They had that run where I just didn’t like what was going on, so I said ‘We’re going to go to the 2-3 zone and at least keep them in front of us so we can see where everybody is.’ You run the risk of giving up open 3s,” McCaffery said.

“I thought we did a good job of moving our feet, being active with our hands and contesting. It was probably the key defensively for us to be able to sit in that and have them utilize a lot of the clock as well to get a shot up.”

It made you wonder why Iowa didn’t just start out playing zone. But at least the adjustment was made. And there was no arguing its impact.

Iowa freshman Joe Wieskamp was aggressive from the get-go against Indiana. But then he had to rein himself in as things changed. Listen: Hawk Central

Wieskamp hot out of the gate, then sees a change

Iowa freshman forward Joe Wieskamp was feeling it from the start Thursday, making all four of his first-half 3-point attempts. He scored only one point in the second half. And that was just fine with him.

Wieskamp’s first two shots were well-contested, but his goal was to be aggressive, so he took them anyway. It was a smart decision. Neither so much as touched the rim.

In the second half, the Hoosiers gave Wieskamp no space to operate. It was obviously a point of emphasis. To his credit, Wieskamp didn’t force things. He tried only two shots in the second half.

“You could tell that they were up into my space a little more, which I think is going to continue to happen throughout the rest of the season. Guys are going to identify me as an elite scorer,” Wieskamp said. “So I’ve just got to continue to develop as a player and realize, although I was double- and triple-teamed in high school, these defenders are a lot more elite. They’ve got big guys coming from the help side. So it’s going to be a lot tougher.

“I was just trying to read what the defense was giving me. I didn’t see a lot of gaps to get to the rim. I just tried to cut off screens, curl, look for my shot. But it just wasn’t there. So I tried to create for others.”

That’s maturity. From a rookie.