“I want them to understand and embrace the No. 2 seed and the home court, because that’s worth something. I don’t want to negate that or take that away from them either.”

Lisa Bluder talks about landing a No. 2 seed and breaks down the Iowa City bracket Hawk Central

IOWA CITY, Ia. — Walking the tightrope that is March basketball requires a blend of confidence and respect. Iowa feels it has both elements mastered as it plows toward the NCAA Tournament.

“Just because you’re playing at home doesn’t mean it’s going to happen automatically, and we remind them of some of the upsets in the past. But I also want them to have confidence,” Hawkeyes coach Lisa Bluder said this week. “I want them to understand and embrace the No. 2 seed and the home court, because that’s worth something. I don’t want to negate that or take that away from them either.” 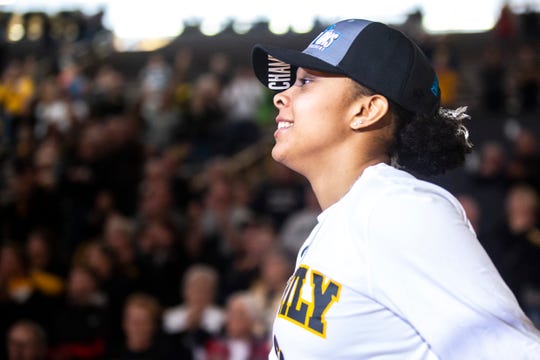 Nearly two weeks have passed since Iowa last played. In between winning a Big Ten Tournament title and Friday’s NCAA Tournament opener against No. 15 seed Mercer, the second-seed Hawkeyes (26-6) have recouped and recovered. There’s a refreshed feeling as this postseason dive begins.

A No. 15 has never toppled a No. 2 seed on the women’s side, but Iowa understands the dangers of March. All of this year’s major players experienced last year’s NCAA Tournament upset. Iowa, then a hot No. 6 seed, sputtered out against No. 11 seed Creighton.

“We were supposed to win that game and keep going against UCLA,” senior Megan Gustafson said. “But we got beat. So this being my last year, my mentality going in is anyone can win on any given night.”

During what can be an exhausting stretch, Bluder believes narrowing the focus can help with preparation. Getting out of Iowa City is the initial goal. Greensboro worries can wait.

“We’re looking at this as mini tournaments,” said Bluder, who was named a finalist for Naismith coach of the year Thursday. “This weekend is one tournament. Next weekend is another tournament. Don’t look at the whole thing because that can be overwhelming.  Instead, just focus on one mini tournament at a time, and that’s what our plans are.

“They’re going to be excited about it. The thing is they respect Missouri. They respect Drake. So they know that game — if we get by Mercer — is going to be a challenge. I think that’s great to get their attention real fast.”

Plenty of intrigue awaits if Iowa can sidestep an upset. Both the Bulldogs and Tigers are coached by former Bluder players; Drake’s Jennie Baranczyk is the more familiar one, but Missouri’s Robin Pingeton was a St. Ambrose standout in the late 80s.

The Hawkeyes already toppled Drake once this year, and Missouri came to Carver-Hawkeye Arena last season as part of the Hawkeye Challenge. A solid crowd should pile in Sunday with a Sweet Sixteen bid on the line.

Iowa has been preparing for this stretch all season. The anticipation has finally morphed into reality.