Saturday's game versus Penn State doesn't carry the glamour as some of Iowa's recent contests. But the Hawkeyes can't let up as March approaches.

The Hawkeyes were happy to bounce back Sunday against Wisconsin. Hawk Central

IOWA CITY, Ia. — Amid an extended homestand that rarely happens in conference play, Iowa seemingly has a get-right stretch before March basketball commences. Almost three weeks without a road trip, coupled with a stretch of beatable foes, sounds like a perfect remedy, right?

It is, in a way — but the No. 21 Hawkeyes (21-5, 12-3 Big Ten Conference) can’t afford an intensity letdown given what’s still at stake. Although a Big Ten regular-season title appears unlikely, Iowa, more importantly, is straddling the hosting bubble with three games and the Big Ten Tournament left. The Hawkeyes need to start the postseason at home.

Iowa passed its initial focus test last Sunday against lowly Wisconsin. Penn State (7-19, 1-14) and its cellar-dwelling status is the next Carver-Hawkeye Arena visitor. The Hawkeyes must treat Saturday’s affair the same as a more glamorous matchup.

“Anybody is a threat in the Big Ten,” Iowa coach Lisa Bluder said this week. “Penn State is a young team, but that means they’ve gained experience all year.” 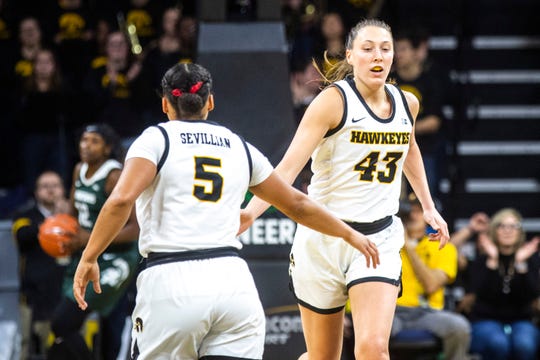 Now, Iowa has already handled Penn State once this year — toppling the Nittany Lions, 77-66, on Jan. 30 without center Monika Czinano. The score wasn’t even really that close, as Penn State needed an inconsequential fourth-quarter surge to make things respectable. Anything but a similar result Saturday would be would be surprising.

What should benefit Iowa during this closing stretch is the experience in this spot. Veterans like Kathleen Doyle, Makenzie Meyer and others just went through this ordeal — needing to finish strong to ensure a favorable NCAA Tournament path — and that should offset the youth still handling success the first time.

And make no mistake, Iowa is in spotlight territory. With an RPI at 11, national recognition coming for Doyle (Wade Trophy watch list) and Bluder (Naismith coach of the year watch list) and the Hawkeyes positioned as a No. 4 seed in ESPN’s latest bracketology, Bluder’s squad has an opening to finish off an improbable year with authority.

“If we can win our last three games (to end the regular season) and have a good showing — get to the finals or semifinals — in the Big Ten tournament,” Bluder said, “I think we should (be an NCAA Tournament host).”

No one covers the Hawkeyes like Hawk Central, the Register and the Press-Citizen. Subscribe today so you don't miss a moment.​​​​​​​

Reaching that benchmark is as pivotal to the Hawkeyes as anybody. Iowa’s Carver-Hawkeye Arena dominance is well-documented, having gone more than two calendar years without a home loss. Wins Saturday and next Thursday on senior day versus Minnesota would run Iowa’s CHA unbeaten streak to 36 games. The Hawkeyes would love to add on more with two March Madness victories in front of raucous crowds.

It’s easy to envision postseason glory at this stage, especially since Iowa has surged to this position unexpectedly in what was supposed to be a seismic rebuilding year. The Hawkeyes can taste what’s around the corner.

But we’re not there yet. Iowa can’t let tune-up games slip to the backburner.

“It’s all about keeping your confidence up at this point in the season,” Meyer said. “The big Ten season is so long, and there are going to be ups and downs when you’re playing in a conference as competitive as the Big Ten.

“So it’s just making sure that everyone feels confident, knowing that we have a great chance to win more conference games coming up. We’re just looking at all the opportunities we have and all the fun left to come.”