The fire and emotion Kathleen Doyle displayed during her Iowa career are now fueling her WNBA Draft stock.

Kathleen Doyle reflects on her Iowa career ahead of senior night. Hawk Central

IOWA CITY, Ia. — You watched it consistently for four years — the chirping, the fist pumps, the emphatic flexes after another tough basket and floor tumble. During a decorated Iowa women’s basketball tenure, Kathleen Doyle gave everyone a front-row seat to her authentic personality.

Hawkeyes everywhere loved it. So did WNBA personnel.

Ahead of the 2020 WNBA Draft, which begins at 6 p.m. Friday on ESPN and will be held virtually, Doyle’s stock is buoyed by the same passion and energy that fueled her collegiate career. Most projections have the Big Ten Conference player of the year going somewhere in the mid-second to early-third round of the 36-pick draft.

DraftSite.com has the 5-foot-9 guard heading to the Phoenix Mercury at No. 18 overall, one spot behind where Megan Gustafson was chosen last year. ESPN and SwishAppeal.com’s latest prognostications have Doyle going a little lower — both to the Chicago Sky at No. 30 overall. A selection anywhere would give Iowa picks in back-to-back WNBA drafts for the first time since 2001-02. 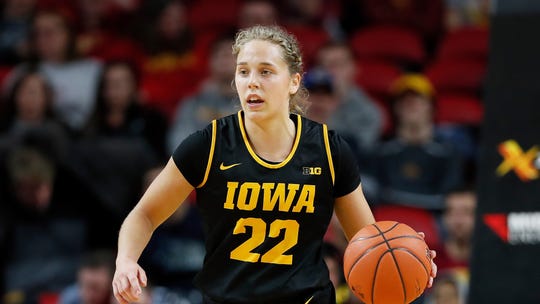 The energy and emotion Kathleen Doyle showed throughout her Iowa career are now fueling her stock ahead of Friday's WNBA Draft. (Photo: Charlie Neibergall, Associated Press)

“People love the way Kathleen plays — her fire, her mentality, her toughness, her grittiness,” ESPN women’s basketball analyst Rebecca Lobo said during a Monday conference call. “Those are all the things spoken about even before her skills on the basketball court, where she’s a great passer and can shoot the ball.

“Because of her competitiveness and that toughness, those are the types of players who get drafted in the second round and make a roster. Sometimes the best thing you can do is have the right attitude to be the 12th man, to come to work every single day and not be upset if you don’t get a ton of minutes in games. But you’re still ready to play.”

It’s clear Doyle’s stellar senior year is the catalyst in making WNBA dreams a reality. While Gustafson garnered most of the Iowa headlines last season, it was Doyle’s turn to shine in 2020.

All she did was construct the Big Ten’s most dominant resume while shifting the Hawkeyes’ rebuilding narrative. Only the coronavirus pandemic could stop Doyle from thriving in the NCAA Tournament.

Doyle may not have the hype of a Sabrina Ionescu (Oregon), Tyasha Harris (South Carolina), Chennedy Carter (Texas A&M) or Te'a Cooper (Baylor) — four guards widely expected to go in the first round — but teams are mostly looking for value after the initial 12 picks. Doyle’s demeanor could make her the perfect fit there.

“Certainly can see her getting the opportunity,” said Cheryl Reeve, general manager and head coach of the Minnesota Lynx. “The second round seems appropriate — and then from there, it’s just about opportunity and fit. What team she’s drafted to and is there going to be an opening. She’s somebody who’ll be highly competitive and will put herself in great position to compete.

“It’s really, really hard (to make a WNBA roster). Just go through rosters before the draft starts. There aren’t’ a lot of openings, and the road for her is going to be a tough one — for anyone who’s drafted in the second and third rounds. But if you have a mindset that this is a process and not about right now, if it doesn’t happen for her this season, she’s certainly a player who’ll continue to play basketball and work to get her shot.”

No one covers the Hawkeyes like Hawk Central, the Register and the Press-Citizen. Subscribe today so you don't miss a moment.​​​​​​​

Reeve and others were quick to compare Doyle’s situation to Gustafson’s, in regards to draft positioning and the attitude required to succeed. Although the latter racked up even more collegiate recognition than the former, Gustafson still was picked midway through the second round with little guarantees.

Despite a circuitous path to a roster spot, Gustafson played in 25 games for the Dallas Wings last season. It may take a similar route for Doyle to settle in.

What she showed at Iowa, though, should only aid her journey.

“Coach (Lisa) Bluder and the rest of the staff do a good job instilling a lot of confidence in you and the skillset you bring to the world,” Doyle said earlier this season. “Not just basketball, but off the court as well. That’s brought me a lot of confidence, just knowing they believe in me. They foster a belief in you that women can do a lot of powerful things.”