After a 13-4 win in the opener, Iowa falls 4-1 to Northwestern after a 3-hour-plus weather delay.

The Iowa baseball team still wins 2 of 3 vs. Wildcats. 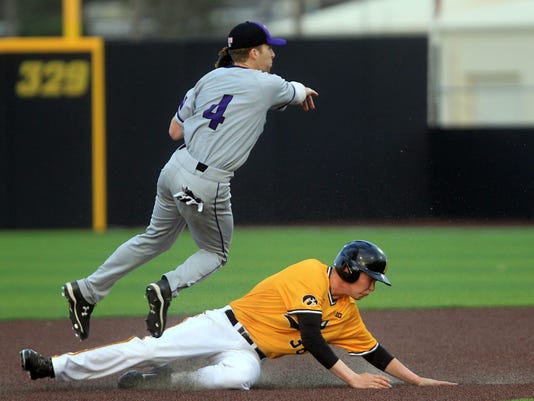 IOWA CITY, Ia. – The scene changed completely in a matter of hours — in the sky and in the Big Ten Conference baseball standings.

A healthy crowd of 1,961 at Duane Banks Field first enjoyed a sunny Saturday afternoon and a 13-4 Iowa rout of Northwestern. But there was a Game 2 — planned earlier in the day because of Sunday's rainy forecast — which turned into a wet and gloomy 4-1 loss for the 14th-ranked Hawkeyes.

The decision to play two came with regret for Iowa coach Rick Heller, who got a call Saturday morning that the forecast didn't look good for Sunday. That moved Sunday starter Calvin Mathews into a Saturday role, and the right-hander with an injury history struggled in 3 2/3 innings.

"If I had it to do all over, hindsight,I would've went with my gut and just played over three days," Heller said. "Because you never want to play a doubleheader. You just don't know what's going to happen in 18 innings."

Northwestern (11-26, 4-8) went with back-to-back left-handed starters, which also threw Iowa off. Though the Hawkeyes piled up a season-high run total in the opener, they struggled against Reed Mason in Game 2 with the same batting order.

"Kind of a letdown-type situation that can happen," Heller said.

The second game didn't end until almost 10:30 p.m. after the doubleheader began at 1, an hour earlier than scheduled. That's because of a 3-hour, 5-minute lightning and rain delay in the middle of the ninth inning.

After the teams returned before a smattering of loyal fans, Iowa went 1-2-3 in less than five minutes — but still came away with its fourth Big Ten series win. Nebraska comes to town next weekend.

Third baseman Kris Goodman said the Hawkeyes needed to flush the loss "right after the shower. In baseball, you have to have a short memory."

The third baseman talks after an Iowa/Northwestern split.

The best news for Iowa in the opener besides the attendance? Stud starting pitcher Blake Hickman wasn't seriously injured after a batted ball knocked him to the ground.

Hickman said afterward the line drive got him in the left triceps before landing in the glove of second baseman Mangler, who then threw to first for an inning-ending double play. (Yes, it's been that kind of season for Iowa.)

"I was laying there (on the mound) and saw three outs and thought maybe they got it wrong or something," Hickman said.

After a few tosses in the bullpen, Hickman knew he was good to go. The converted catcher ended up throwing seven scoreless innings on a career-high 115 pitches in improving to 6-1.

"Coach asked me if I was good," said Hickman, whose ERA in Big Ten play dipped to 1.88. "Nothing was taking me out of that game."