Program already has several key juniors committed to the program.

The No. 23 Hawkeyes inked the Big Ten's top-ranked recruiting class last November. “I had a lot of support from day one, and we were able to get every kid we wanted to come take a look and listen to what we had to offer,” Iowa head coach Rick Heller said.(Photo: AP)

Up to this point, Rick Heller has been selling a property under construction.

Although Iowa's second-year baseball coach could show off the school's improving facilities and point to his track record as a program-builder at three other stops, he couldn't give prospects much more than a blueprint of how the project in Iowa City might look in a couple years.

Yet Heller has had little trouble drumming up interest since arriving from Indiana State.

The No. 23 Hawkeyes inked the Big Ten's top-ranked recruiting class last November and they've already locked up commitments from six of the best players in a talent-rich Iowa high school junior class.

"I had a lot of support from day one, and we were able to get every kid we wanted to come take a look and listen to what we had to offer," Heller said. "We didn't get all the guys we wanted, but we got the majority."

That was before Heller could show up at a prospect's front door and hand over the national rankings that had Iowa highlighted in the top 15 for a portion of the year. It was before the Hawkeyes qualified for the NCAA Tournament for the first time in 25 years. It was before they were regularly packing the bleachers at newly renovated Banks Field.

"We really haven't had a chance to go out and utilize this season yet, because we were pretty close to being finished on '15, and '16 we're getting close to the point where we're about done as well," Heller said. "The '17 class and '18 class is I think where you'll see the benefits of this season." 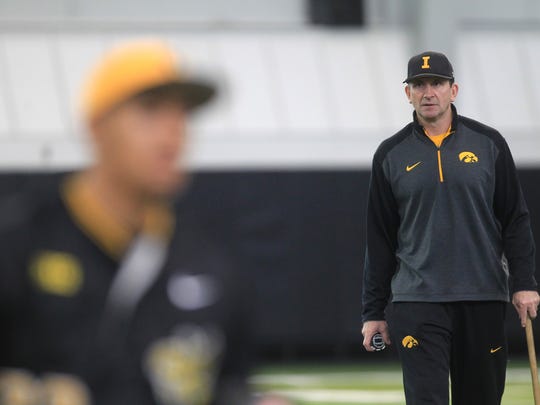 The No. 23 Hawkeyes inked the Big Ten's top-ranked recruiting class last November. “I had a lot of support from day one, and we were able to get every kid we wanted to come take a look and listen to what we had to offer,” Iowa head coach Rick Heller said. (Photo: David Scrivner/Iowa City Press-Citizen)

Gone are the days when college baseball coaches could wait until a prospect's junior season to begin the evaluation process. In 2009, the NCAA implemented restrictions on scholarship distribution and capped rosters at 35, rules that leveled the playing field and forced coaches to get in the game earlier with underclassmen.

Though Heller said the changing landscape has increased the recruiting workload and made evaluations more difficult, the Hawkeyes seem to be protecting home turf that had often been poached by traditional powers such as LSU, USC and Wichita State previously.

"They're getting kids to commit before the rest of the world knows who they are," Perfect Game president and national director Jerry Ford said. "They might not land all those kids ... but they're going to get more of them than they ever did before."

Fourteen of the 20 players that have either committed to or signed with the Hawkeyes for the next three classes are Iowans. Iowa has cornered the in-state market at a prime time.

"The 2016 class is loaded in Iowa," Perfect Game Iowa League director Steve James said. "Iowa snagged most of the top guys and there's a ton of other kids that are going to be Division I guys that Iowa would normally get but there's just not enough room."

When he arrived at Iowa, Heller, an Eldon native who played and coached at Upper Iowa before an 11-year stint at Northern Iowa, zeroed in on in-state targets and highlighted 2015 as a key class for the Hawkeyes, who open the NCAA Tournament on Friday against Oregon in Springfield, Mo.

"We knew (the 2015 class) was going to be very important and we started working diligently to go out and find the best players we could in that class," Heller said, "and I feel we did a great job."

Iowa's class is headlined by Waterloo Columbus outfielder Luke Farley, rated the top player in the state and one of the top 200 seniors in the country by Perfect Game.

"He's a good athlete. He's a good player, but the tool that stands out for him the most is the bat," Ford said. "He's got some power and he can really hit."

Dallas Center-Grimes senior Cole Baker is a hard-throwing right-hander who will join Iowa in the fall. He struck out 106 batters for a 0.68 ERA in 82 innings pitched last season and owns a fastball clocked as high as 91 mph, according to Perfect Game USA. (Photo: Register file photo)

The Hawkeyes emphasized pitching with their 2015 class. Seven of the 13 players Iowa signed in the fall could help the Hawkeyes on the mound, including hard-throwing metro-area aces Cole Baker (Dallas Center-Grimes) and Chris Comito (Norwalk), who combined for 213 strikeouts in 149 innings last season.

"We feel they're freshmen who can come in and contribute on the mound right away and that's what we needed in this class — players who can come in as younger players and have a big role on the team," Heller said. "Both of those guys have the potential to get innings and fight for jobs right away.

"They have fastballs already up around 90 and I think the velocity will go up for both of those guys by spring next year, and both of them have potential to have very good secondary stuff. The thing we like about both of them is they throw strikes with their fastballs and they compete hard."

Iowa has 20 players signed or committed through the 2017 classes. Here's a look at seven of the top Hawkeye recruits: