Burly South Dakota native Jake Adams wasn't supposed to end up in Iowa City. ... Or was he? 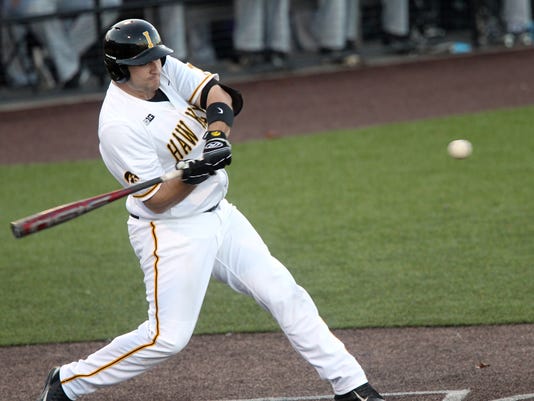 IOWA CITY, Ia. — The cold news blew in on a hot afternoon last April in Boone.

Turns out, it was.

Pitching ace Nick Belzer became the grim messenger, informing him that North Dakota, where Adams months earlier had signed to play baseball, was shutting down its program.

Between squeezes of a glove, Adams’ Division I scholarship had vanished like a cloud of dirt in the wind.

“My heart sank,” Adams says, as his mind travels to his empty feeling that day. “What the hell? What am I going to do now? I was literally at a loss for words.”

He didn’t know it then, but that was the first moment of an unlikely chain of events that led to Adams to becoming one of the most prolific home-run hitters the Iowa Hawkeyes baseball program has seen in decades.

Late in a spring semester is about the worst time to be a baseball prospect without a college home. By then, Division I coaches (who are limited to 11.7 scholarships for 35 roster spots) don’t have piles of unspent cash lying around.

DMACC’s hitting coach at the time, Sean Moore, saw Adams’ understandable anxiety and remembers re-assuring him: “Don’t worry about it. Keep playing. If (schools) want you, they will free up money.”

The day the North Dakota news broke, Moore — a former Hawkeye — reached out to Iowa hitting coach Marty Sutherland and told him: “Hey, you need to get on this guy.”

Rick Heller, now in his fourth year as Iowa’s baseball coach, liked Adams, who blasted an eye-popping 42 home runs in two seasons for DMACC. But finding money was going to be a problem.

Luckily for Iowa, everyone else interested in Adams (except his home-state school, South Dakota State) was out of money, too. Adams had walk-on offers from Michigan State, Illinois and Kansas State.

Heller cobbled together a partial scholarship for Adams, with some funding freed up because incoming recruit Malique Ziegler was taken in the June MLB Draft and signed with the San Francisco Giants.

“I’d rather take 40 percent at the Big Ten level,” Adams says now, “than a full ride in the Summit League.”

Adams is not only playing in the Big Ten, he’s dominating it. He has eight home runs, three more than any other player in the league, in 19 games.

The year before that, the high was three.

Now, a coach who has spent his first three years manufacturing runs behind good pitching and defense has the luxury of a legit slugger in the No. 4 spot.

“Since I’ve been here,” Heller says, “we haven’t really had a guy quite like him.”

Watch Adams take batting practice once, and you can see his right-handed power is no fluke. He puts on a show, and it translates to games.

Kansas State found that out the hard way. Adams hit the first two pitches he saw in Sunday’s series finale in Manhattan, Kan., for home runs. Later, after an intentional walk, he hit a third homer on a 3-1 pitch to help preserve Iowa’s 12-11 win.

He’s always had this kind of power, he says, from his days in Brandon, S.D., where he was football teammates with current Hawkeye wide receiver Matt VandeBerg.

At 6-foot-2, 240 pounds, he lumbers to the batter’s box with a football body. But he enters it with a baseball mind.

Seven of his eight homers have been against off-speed pitches; not your stereotypical, looking-for-dead-red slugger. That approach has helped Adams compile a .333 batting average with Big Ten-bests of 28 RBIs and a .667 slugging percentage.

“Not only does he possess a lot of power, but he’s a really good hitter, too,” Heller says. “That’s why he’s got eight (homers). It’s not like he goes up there and wastes at-bats.”

He’s found a home in Heller’s cleanup spot — and in Iowa City.

The bomb was part of a 12-1 victory over Bradley on Wednesday.

“You can get a total of six ducks per person,” says Adams, who notes that turkey season is right around the corner. “We always have a little competition to see who shoots the most.”

(Take a guess who cleans up.)

He even has a familiar coach wearing black and gold, too. In January, Moore took the Hawkeyes' volunteer assistant role vacated by Pete Lauritson's departure for the Cleveland Indians.

Since arriving in August, Adams has only returned to South Dakota once, for Christmas.

“I haven’t wanted to go home. This is home for me,” Adams said. “I’ve made good friends. This is everything I wanted here in Iowa.”

Quite the turn of events for a man who, in April, was searching for a baseball home.