Hawkeyes couldn't hold leads of 8-0 and 13-6 en route to a tough loss versus Missouri. 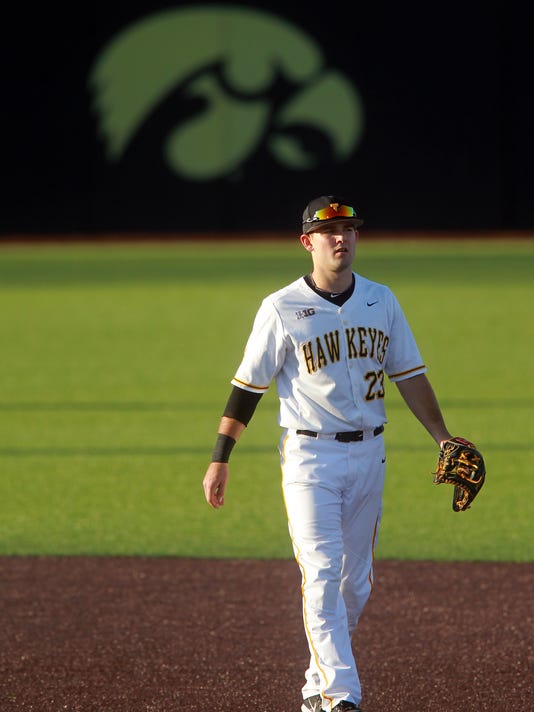 IOWA CITY, Ia. — Things can get quite loony when the wind starts whipping in the Hawkeye State. Flags blowing and midweek baseball are a match made in chaos heaven. Expect the unexpected, and then some.

Then there’s what happened Tuesday in Iowa City.

Duane Banks Field was a magnet for absurdity, as the Hawkeyes and Missouri traded blows all afternoon in a pivotal midweek showdown. Iowa led by eight early and seven late — and both cushions disappeared. The Tigers had a ninth-inning lead that was erased by the unlikeliest of homers. Numerous chances were sprinkled in between.

Thirty-three runs and 40 hits later, Missouri emerged with a ridiculous 17-16 win at Duane Banks Field. The Hawkeyes (26-15), after failing to walk off in the 10th despite loading the bases, surrendered two 11th-inning runs to end it.

On a day where Iowa clubbed seven homers, including Mitchell Boe’s first collegiate long ball that knotted things,15-15, in the ninth, the Hawkeye arms were a merry-go-round of futility. Rick Heller tried his best to stop the bleeding, plucking one reliever after another from his beleaguered bullpen.

"We just didn't pitch very good at all today," Heller said, "especially the guys in the middle innings. Let them back into it, and once they got hot, it was just a bunch of ground balls finding holes. And we couldn't stop it."

Nothing was the same after starter Trenton Wallace exited with forearm tightness following three scoreless frames. Seven different relievers tried their hand, six of which surrendered runs as Missouri clawed back from 8-0 and 13-6 holes.

Nick Nelsen, Ben Probst and Grant Leonard absorbed the brunt of the damage, yielding a combined 12 runs and 12 hits in just 4 2/3 innings. Grant Judkins and Cam Baumann followed and weren’t much better.

Judkins surrendered two in the ninth to give Missouri a 15-14 lead, which negated catcher Tyler Cropley’s go-ahead homer in the eighth. Baumann served up the final damage — six hits and two runs in 1 1/3.

"A lot of stuff left over the middle of the plate," said Cropley, who finished 3-for-5 with two homers, four RBIs and four runs scored. "Just balls getting hit, just putting good swings on it. We'd rather have our guys get hit out of the game than walked out of the game."

Iowa tried one last rally in the 11th. The Hawkeyes climbed within one on Chris Whelan’s solo blast and put the tying and winning runs in scoring position with two down. But Austin Guzzo grounded out to end the threat and a wild day.

Iowa is left to pick up the pieces. The Hawkeyes added Missouri to the schedule only a few weeks ago in hopes of snagging a bonus RPI boost, but all Iowa got was a draining affair that ultimately offered no reward.

The Hawkeyes might catch a break if Wednesday's game versus Western Illinois gets cancelled — rain is in the forecast, and the Leathernecks' 286 RPI offers no benefit whatsoever — but Iowa can't let this one linger into what is a monumental weekend.

A favorable result Tuesday was tantalizingly close. But never doubt what can unfold when the wind's blowing out.

"It just sucks," Robert Neustrom said, "to come out on this end."

Dargan Southard covers preps, recruiting, Iowa and UNI athletics for the Iowa City Press-Citizen, The Des Moines Register and HawkCentral.com. Email him at msouthard@gannett.com or follow him on Twitter at @Darigan_Southard.