Three Iowa arms came off the board on the MLB draft's third day. Hawkeyes signee Korry Howell was drafted as well.

The Iowa pitcher discusses his seven innings of work in a 2-1 loss to Michigan on Wednesday at TD Ameritrade Park. Hawk Central

After two of Iowa’s top hitters were selected Tuesday, the MLB draft’s final day leaned more toward the Hawkeye arms.

Three Iowa pitchers were picked Wednesday — redshirt junior Nick Allgeyer in the 12th round by the Toronto Blue Jays (No. 356 overall), junior Zach Daniels in the 19th by the Atlanta Braves (No. 562 overall) and Brady Schanuel in the 27th round by the Milwaukee Brewers (No. 815 overall).

Allgeyer and Daniels were two of Iowa’s most reliable pitchers in 2018. The former was the Hawkeyes’ clear-cut ace, while the latter helped lock down the backend of Rick Heller’s bullpen. Schanuel was a high-end draft prospect entering the year, but had a disappointing season as Iowa’s Saturday starter.

All three had eligibility decisions to make. Schanuel and Daniels both confirmed to HawkCentral that they'll forgo their senior seasons. Allgeyer is expected to turn pro as well.

Allgeyer entered as Baseball America’s No. 457 overall prospect, with Schanuel slotted at No. 408. Although Daniels was unranked, going somewhere during the draft’s third day is what he had in mind.

“We had heard maybe a little bit earlier today,” said Daniels, who confirmed he will forgo his senior year and sign with the Braves. “But other than that, everything went as planned.”

Daniels said he was on his way to Chick-fil-A when his adviser called with the Braves’ selection. Ironic, considering the popular fast-food restaurant is headquartered where? 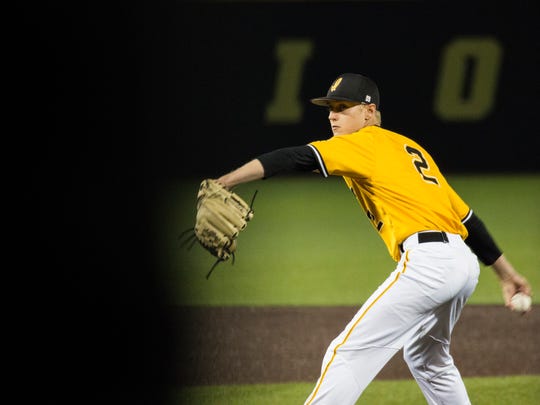 Iowa pitcher Zach Daniels delivers a ball during a baseball game at Duane Banks Field in Iowa City between Iowa and Penn State on Saturday, May 19, 2018. (Photo: Joseph Cress / For the Press-Citizen)

Daniels produced a 2.56 ERA, five saves and 49 strikeouts in 45 2/3 innings, often closing out Allgeyer starts on Friday night. The duo combined for a third of Iowa’s 33 wins and used their junior years to hop squarely onto draft radars.

Coming off Tommy John surgery, Allgeyer quickly put any concerns to rest. The southpaw was a trusted weekend anchor, who — on his best days — was downright filthy. On his worsts, he at least gave the Hawkeyes a chance to win. That’s all you can ask for from your weekend horse.

“Allgeyer has been Mr. Reliable for Iowa,” his Baseball America scouting report reads. “After being pulled after five innings in his first start of the season, he worked six or more innings in each of his last 14 starts, allowing more than three earned runs only once over that span.

“There’s nothing exceptional about Allgeyer’s stuff — he’s 88-92 mph with a big-breaking slider and even bigger and slower curveball. To top it off, he has a potentially average changeup. What helps Allgeyer’s stuff play up is his above-average control and ability to mess with hitters’ timing by varying his speed to the plate.”

Iowa pitcher Brady Schanuel delivers a ball during a baseball game at Duane Banks Field in Iowa City between Iowa and Penn State on Saturday, May 19, 2018. (Photo: Joseph Cress / For the Press-Citizen)

Schanuel finished 5-7 with a 5.94 ERA, struggling with command throughout the Big Ten schedule. He ended the season with 43 walks in 53 innings, and was eventually pulled from the weekend rotation before the conference tournament.

When on, though, Schanuel's stuff was as strong as any on the Iowa stuff. He was named the Big Ten's co-pitcher of the week after a shutdown performance versus Indiana in late March, and revved his fastball up to 95 out the bullpen late in the year.

Although this year didn't unfold as expected, Schanuel is hopeful for the future.

"I battled through it and looked on the bright side through all of it," Schanuel said. "I'm excited for my future. It's an exciting time for anybody who's ever gone through (the draft process), but also frustrating with coming to Iowa and having expectations — a couple that I didn't meet.

"But that's in the past. And I'm looking toward the future."

Five Hawkeyes were taken in a single draft for just the second time in the last 25 years. Both of the those have occurred under Heller.

Hawkeye shortstop signee Korry Howell went to Milwaukee as well in the 12th round (No. 365 overall). The former Kirkwood standout told HawkCentral he’ll “most likely” sign with the Brewers.

The MLB signing deadline for underclassmen and high school seniors is July 6 at 4 p.m. CT.

"It was an extreme relief," said Howell, who Baseball America ranked as the No. 385 overall prospect heading into the draft. "I’ve been working my whole life for this, and to finally see everything pay off in literally 30 seconds of my future, I just got a nice little view of what’s going to happen."

Howell piled up 40 stolen bases, 45 RBIs and hit .401/.483/.572 as Kirkwood's leadoff hitter. His Baseball America scouting report describes him as having "excellent athleticism" with solid range and speed.

Dargan Southard covers Iowa and UNI athletics, recruiting and preps for The Des Moines Register, HawkCentral.com and the Iowa City Press-Citizen. Email him at msouthard@gannett.com or follow him on Twitter at @Dargan_Southard.