A look at where the Hawkeyes sit heading into this weekend's home-opening series.

Aside from a few snow patches here and there, Duane Banks Field looked ready to roll this week. Like Iowans everywhere, the Hawkeyes’ home park somehow survived this brutal stretch of wintry chaos.

Chalk another win up to turf.

After a grueling first month on the road, Iowa is finally set for its first homes games this year. The Hawkeyes (7-6) host Cal State Northridge for three — one Saturday and a doubleheader Sunday.

It’s just part of the deal in Midwest baseball, but that doesn’t make the early-season grind any easier. Through four weekends, Iowa has played in three different time zones. That stretch includes three doubleheaders, a venue change and multiple schedule alterations. 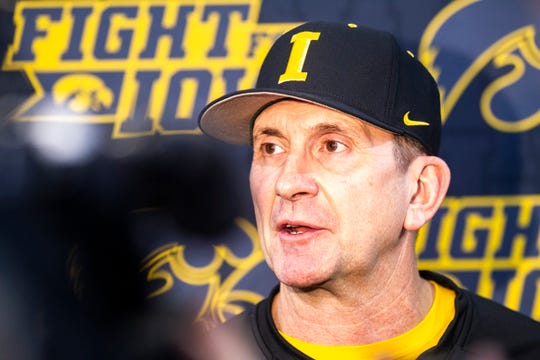 There have been highs and lows, as expected. The Hawkeyes followed up a big series win at then-No. 19 Oklahoma State with a dud against RPI-killing Evansville. Iowa swept its doubleheader at Hawaii, then blew a chance at a series win the next day.

So it goes on the road. Iowa hopes a less hectic itinerary will generate more productivity.

“It’s always nice when we can get the field cleared and start having some home games coming in and start practicing on a regular basis,” left-fielder Chris Whelan said. “Monday is our off day, then Tuesday and Wednesday practice, and then you’re turning around and going right back out.

“It’s nice to get rid of the travel for a little bit.”

Here are some takeaways from Iowa’s early nonconference slate.

Bumps on the health front

Injuries are going to happen in a long season, but the Hawkeyes have been hit hard early.

Right-hander Ben Probst, one of Iowa’s top relief options, is done for the year after having surgery Tuesday. Southpaw starter Jack Dreyer remains out of the weekend rotation for the time being. Kirkwood transfer Hunter Lee has been shut down as well.

“He had a partial UCL tear,” Heller said. “Decided to go with the partial surgery that Trenton Wallace had last year to avoid it hopefully happening again. We’ll have him back to full strength close to fall practice.”

On Lee, who made two relief appearances before having issues...

“Hunter Lee has had some trouble since he got here with ulnar nerve issues,” Heller said. “When he came in, the ulnar nerve was aggravated. He didn’t really pitch all fall. We thought he was healthy, and now, he’s back on the shelf with that again. The docs tried some stuff with Hunter. He started his throwing program (Wednesday), and we’ll see if he can make it a go for this season. Or he might have to get the ulnar nerve removed. We’ll know more on that in the next couple weeks.”

On Dreyer, who started the first two weekends but hasn’t pitched since...

“They gave Jack a shot in his shoulder to hopefully calm it down, and then gave him some time off,” Heller said. “He’s been doing non-throwing rehab with the trainers. He starts back on his throwing routine on Friday. So we’re hoping once he starts the throwing routine, it would probably be two full weeks. First, to see if the pain comes back or if it’s gone. And if it’s gone, he’ll try to get back into pitching shape whenever it is that he can get out there. Probably would be at least two, probably three weeks.

Additionally, Tanner Padgett continues to deal with a hamstring issue that’s plagued him since the Oklahoma State series. The Johnson County Community College transfer is batting a team-best .395.

Stability behind the plate

Arguably the biggest hole Iowa had to fill this offseason was at catcher, where the reliable Tyler Cropley held things down for two seasons. Juco product Austin Martin has made it an easy transition.

The Southeastern Community College product is slashing .341/.400/.545 through 13 games. He’s tied for the team lead in hits and ranks second in extra-base knocks.

Martin’s demeanor behind the plate has been rock-solid as well. Taking charge of a pitching staff as a newcomer requires some navigating. But Martin has delivered so far.

“My biggest thing stepping in here was just to gain the trust and respect of my teammates,” Martin said. “And I’ve been doing everything I can every day to do that. I think the guys who have been here before I got here, they’ve done a really good job of welcoming me.”

Although Dreyer’s injury has shaken up the weekend rotation a bit, Iowa continues to piece it together.

Grant Judkins has been Iowa’s most reliable starter, having surrendered just four runs in 21 2/3 innings. The command can improve — Judkins has walked 13 so far — but the Hawkeyes have found some Sunday stability. That’s huge in tight series.

Cam Baumann has slid in for Dreyer and will make his fourth start against the Matadors. The sophomore from Fairfield didn’t have his best stuff against Evansville or Oklahoma State, but there have been enough glimpses to remain encouraged. Baumann should get the ball on Saturdays at least until Dreyer is healthy.

The early-season pressure has faded. Now, it’s back to pitching.

“I’ve just tried to keep things simple,” McDonald said. “I felt like I was thinking of things that are more external factors. I wasn’t just trying to make good pitches.”