Iowa's point guard had a chance to put his team up 10 or 11. Instead, he slipped on a sticker. 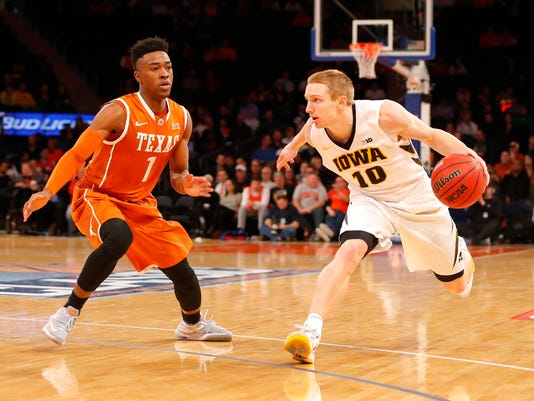 NEW YORK – Sure, Texas had its way with Iowa in the second half of Thursday's 2K Classic semifinal.

But the fluky way the first half ended didn't help the Hawkeyes' cause.

Holding for the last shot of the half and Iowa up eight points, point guard Mike Gesell slipped on a tournament decal placed on the Madison Square Garden hardcourt. The ball squirted away, Texas' Javan Felix picked it up, and he dribbled to an uncontested layup.

Big play? Texas coach Rick Barnes contended it might have been the biggest in what would become a 71-57 Longhorns victory.

The scenario really couldn't have played out worse for Iowa, which shot 25 percent in the first half (8-for-32) but was still in position to go into the halftime locker room up double digits.

Texas Longhorns center Prince Ibeh (44) drives to the basket during the first half against the Iowa Hawkeyes at Madison Square Garden. Jim O'Connor-USA TODAY Sports
Fullscreen

Iowa Hawkeyes head coach Fran McCaffery consoles center Gabriel Olaseni (0) as he is ejected from game during the second half for a flagrant foul against the Texas Longhorns at Madison Square Garden. Texas Longhorns defeat the Iowa Hawkeyes 71-57. Jim O'Connor-USA TODAY Sports
Fullscreen

Think that wasn't a momentum-changer? The Longhorns scored 18 points in the first 3 minutes, 18 seconds of the second half to take a 42-37 lead.

"We're up eight, trying to run a play, last shot of the half, make it we go up 10, maybe 11," Iowa coach Fran McCaffery said. "He slips on a sticker. I still don't know why they put stickers down. Kids keep slipping on them. It's just unfortunate that the half ended that way, the way we played."

The turnover was emblematic of Gesell's rough night.

THE GAME: Iowa struggles again in second half against ranked foe

The junior finished 1-for-8 from the floor and missed the front end of a one-and-one on his only free-throw attempt. He had four assists and two turnovers.

"(Gesell) was good for a while. I thought he was playing pretty solid," McCaffery said. "I thought the play at the end of the half hurt his confidence a little bit."