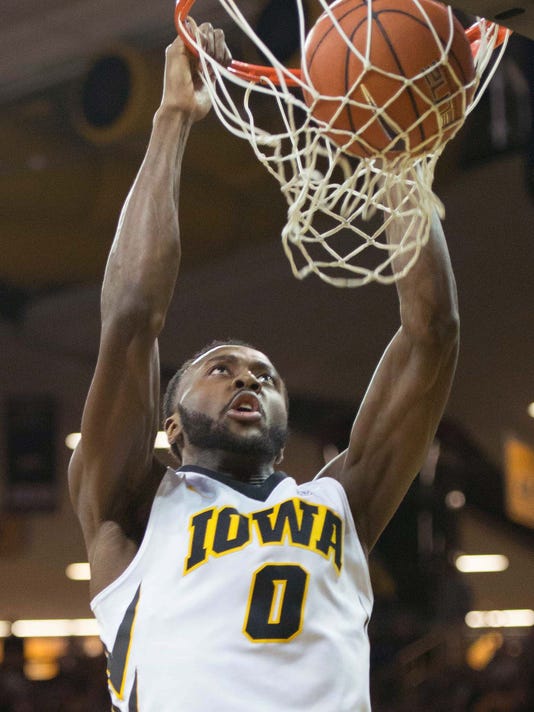 IOWA CITY, Ia. – When Gabe Olaseni checked out of Wednesday's game for the final time, the tears came. And his Iowa coaches and teammates were there for him. A hug. An embrace. A rub to the head.

"When something happens to one of your brothers, you have to wrap your arms around him and love him," said Aaron White, Olaseni's closest friend on the team.

"He'd been sick for a fairly short time," Iowa coach Fran McCaffery said. "I think it's unexpected that he would have passed when he did, yes. But I think it was getting to the point where he was pretty sick."

Olaseni decided to play Wednesday. Then he went out and scored 10 points, grabbed five rebounds and blocked four shots in a 70-49 victory over Northern Illinois at Carver-Hawkeye Arena.

"He played great," McCaffery said, fighting back tears. "I'm so proud of him."

McCaffery, assistant coaches and Olaseni visited with Gabe's mother, Yvette, via Skype, after learning of the tragedy.

"One of the last things his father said was he's so proud of Gabe and he wants him to maximize this opportunity his senior year," McCaffery said. "(His dad) didn't want to do anything that would in any way impact his ability to do that. So I think that made it easier for him. And his mother made that abundantly clear. So I think that solidified it in his head that he was going to go out and play."

McCaffery thinks Olaseni will return to London to be with his family, but arrangements are pending.

While Olaseni was talking to his family via Skype, assistant coach Kirk Speraw gathered the team together in the locker room and broke the news to them.

Olaseni and White met as freshmen, living across the hall from each other. Olaseni, from London, and White, from Strongsville, Ohio. Two worlds apart, and few spoken words for weeks. But they became close friends soon after, a bond that is strong now.

White, like his coach, was very emotional after the game.

"He's like a brother to us, especially me," White said of Olaseni. "The best thing I can do is be there for him and love him as a brother. We're here for him. He's in my prayers."

Sometimes, life serves up lessons like it did Wednesday.

"There's more to life than basketball," White said. "This is a clear example. Sometimes there are things much bigger going on."

When Iowa went on a foreign tour in the summer of 2013, it played a game in London. Olaseni's parents were able to see Gabe play for the first time as a collegian. A proud moment in Gabe's life. One he'll never forget.

"It's just a tough situation,' White said. " I'm proud of the way he played."

Iowa improved to 4-2 with the victory. White and Anthony Clemmons both scored 14 points. That matched a career high for Clemmons, who also scored 14 against Iowa State as a freshman. The junior guard also had three assists, two steals and no turnovers in 25 minutes.

"And he played great defense, like he always does," McCaffery said. "Toughness. I thought he was spectacular."

Freshman guard Brady Ellingson also made his college debut, scoring a point in three minutes. He has been battling a foot injury. His shooting gives him a chance to contribute if he can stay healthy.

"I don't know where this is going to end up for him," McCaffery said. "He had a great practice Tuesday. We'll see it he can tolerate (the pain in his foot). If not, we'll shut him down and redshirt him."