Success in half court a sign of Iowa's progress

Tuesday's 71-65 victory at No. 20 Ohio State in the Big Ten opener was proof positive that the Hawkeyes have made strides in that aspect of the game.

Success in half court a sign of Iowa's progress

Iowa Hawkeyes bench celebrates during the second half of the 71-65 win over the Ohio State Buckeyes Dec. 30 in Columbus, Ohio. Joseph Maiorana/USA Today Sports
Fullscreen

The Iowa Hawkeyes warm up prior to the game versus the Ohio State Buckeyes Dec. 30in Columbus, Ohio. Joseph Maiorana, Joe Maiorana-USA TODAY Sports
Fullscreen

The Iowa Hawkeyes warm up prior to the game versus the Ohio State Buckeyes Dec. 30in Columbus, Ohio. Joseph Maiorana, Joe Maiorana-USA TODAY Sports
Fullscreen 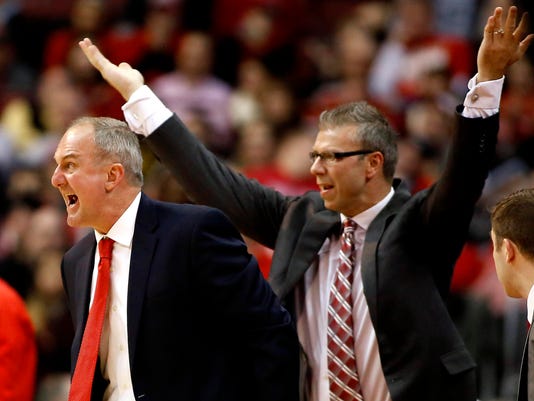 Iowa coach Fran McCaffery wants his team to push the basketball in transition. The Hawkeyes have scored a lot of points that way during McCaffery's five seasons as coach.

But good opponents are able to slow down that fast-break effectiveness and force Iowa to play a half-court game. Tuesday's 71-65 victory at No. 20 Ohio State in the Big Ten opener was proof positive that the Hawkeyes have made strides in that aspect of the game.

"You have to have a maturity and understanding of how the game is supposed to be played, and a willingness to move the ball and share the ball and be happy for one another regardless of who scores," said McCaffery, who is preparing his team for Monday's 8 p.m. game against Nebraska at Carver-Hawkeye Arena. "I've never been around a great team that didn't have that trait. And hopefully that trait will continue for us."

And the Iowa point guard lamented his one missed dunk in the halfcourt offense.

Iowa's half-court attack was much different last season. The ball was in the hands of first-team all-Big Ten guard Devyn Marble a lot. This season's approach is different. Shots are being created by ball movement more than off the dribble.

Iowa (10-4, 1-0 Big Ten) has struggled offensively for long stretches this season. Shooting has been an issue. But the victory at Ohio State showed a level of maturity from McCaffery's team. The Buckeyes played zone defense against Iowa, challenging outside shooters.

Iowa made some perimeter shots, but it also beat that zone with ball movement that got plenty of good shots for the offense. The Hawkeyes shot 46 percent from the field, their best outing in nine games, and made eight of 22 3-pointers.

Iowa is still 10th in the Big Ten in scoring (70.7 points per game) and 13th in both field-goal percentage (.410) and 3-point percentage (.313). But unlike previous games, the Hawkeyes were more patient and productive than they have been in the half court. There were no spells of quick shooting or the wrong guys shooting at the wrong time. The offense found a rhythm and won because of it.

The Hawkeye forward talks confidence and his native Ohio after a 71-65 win in Columbus.

"It's a fine line, because you want your guys to be aggressive, and you want them to shoot and play with that attack mentality," McCaffery said. "But not at the expense of shooting contested shots that don't go in."

Another bright spot at Ohio State was the play of Jarrod Uthoff, who scored 18 points and made four of six 3-pointers. Uthoff's versatility is important to the long-term success of this team. He is second on the team in scoring (11.1), rebounding (6.6), steals (18) and blocked shots (21). His 40.7 accuracy from 3 leads the team.

"Against North Carolina, he was 2-for-13 and took the same shots," McCaffery said. "He just didn't make them. But he impacted the game with 11 rebounds and five blocks. And that's what I've tried to get him to do. Play the game at an incredibly high intensity level. And then you're going to impact the game positively whether your shot is going in or not."