Iowa's White thought he was ejected

Iowa's Aaron White thought he was ejected after two technical fouls in win over Michigan.

Iowa's White thought he was ejected

White gets two technical fouls in Iowa victory against Michigan on Feb. 5, 2015. 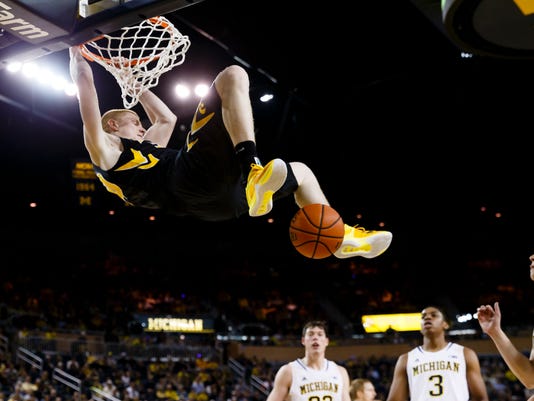 Iowa forward Aaron White was called for a technical for hanging on the rim on this dunk in a win Thursday over Michigan. “I didn’t want to flip backwards,” White explained.(Photo: Rick Osentoski/USA Today)

ANN ARBOR, Mich. – Aaron White had his head down. And for good reason.

After picking up his second technical foul in less than two minutes during the second half of Iowa's game at Michigan on Thursday, White didn't want to make eye contact with his mom, Deb Kuntz, seated behind the Hawkeye bench. His coach, Fran McCaffery, wasn't a very good option, either.

"I was probably more nervous with Fran," White said after the Hawkeyes' 72-54 victory. "I know Fran was not pleased with me."

White's first technical came when he did some trash talking after blocking a shot by the Wolverines' Ricky Doyle with 15 minutes 9 seconds remaining.

"You can probably figure out what he said," McCaffery said.

White's dunk with 13:32 to go gave Iowa an 18-point lead. But he was assessed another technical for hanging on the rim.

After getting whistled for the second technical, White thought he was going to be ejected from the game.

"My heart sank to my stomach," White said. "I thought for sure I was out. A big atmosphere like this, a dumb play. Not flagrant. So weird. I don't think I've ever had two T's in a game."

But the second technical wasn't ruled a flagrant, so White was able to keep playing.

"My mistakes, both of them," White said. "I'm glad I didn't get thrown out. I would have felt like a dummy."

White had another dunk opportunity, taking a perfect lob pass from Josh Oglesby and dropping it through the hoop with just under 10 minutes to play. No rim-hanging this time. It was, by White standards, a gentle dunk.

"That's just the way I dunk on lobs," White said. "It wasn't a reaction to the other dunk."