Does Iowa's clicking lineup have room for Oglesby, Uhl?

Does Iowa's clicking lineup have room for Oglesby, Uhl? 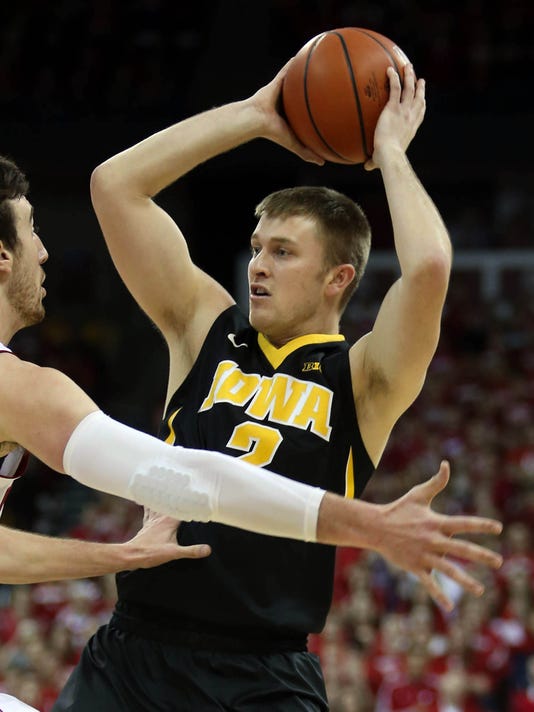 IOWA CITY, Ia. – As Iowa ripped through Michigan and Maryland with back-to-back season highs in shooting percentage, it happened with seven primary guys on the basketball court – a departure from the norm for coach Fran McCaffery.

But even though starters Mike Gesell, Peter Jok, Jarrod Uthoff, Aaron White and Adam Woodbury plus reserves Gabe Olaseni and Anthony Clemmons played 93 percent of the Hawkeyes' minutes in that two-game blitz, don't expect McCaffery to dial down to a streamlined seven-man rotation.

"I think we're going to have to get Dom Uhl more minutes. We have to get Josh Oglesby back in the lineup," McCaffery said. "In this league, with the intensity of the games and the length of the season and the grind, you need more bodies."

Oglesby, a senior guard, and Uhl, a freshman, have combined for just one field goal (on 12 attempts) in Iowa's last four games. They had been rounding out McCaffery's nine-man rotation while Trey Dickerson continues to be stuck on the bench as the third point guard.

Oglesby played just 12 minutes as the Hawkeyes shot 62.7 percent in Thursday's 72-54 win at Michigan. Oglesby (illness) did not suit up against Maryland as Iowa shot 64.3 percent in a 71-55 victory.

McCaffery said Oglesby, who has averaged 2.4 points and 21.2 minutes in his nine Big Ten games, would be good to go in Thursday's 6 p.m. home game against Minnesota.

"You never know who's going to get in foul trouble," McCaffery said. "Who anticipated Aaron White getting a stinger in the first minute of the Purdue game? So other guys have to step in. Those kind of things are unforeseen and hopefully won't happen. But you better have nine or 10 guys ready in this league."