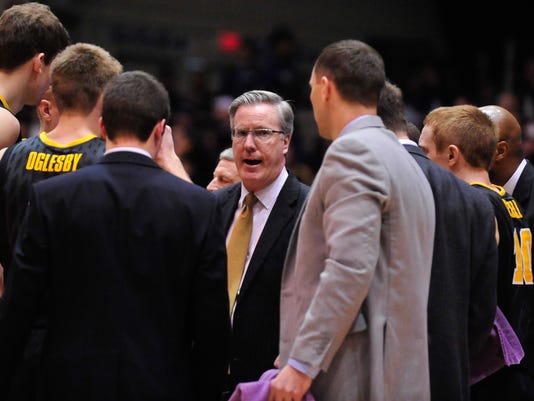 Iowa basketball fans have heard about the Hawkeyes' incoming recruiting class for months. They've read stories, and watched video clips online. But now they'll have a chance to see the program's future in person.

The 29th Prime Time League tips off Thursday at the North Liberty Community Center, and five of the Hawkeyes' six incoming recruits will take part this summer. Four of them — Dale Jones, Ahmad Wagner, Brandon Hutton and Christian Williams — will play Thursday. Andrew Fleming's team has a bye.

The sixth member of the class, Isaiah Moss, is not playing while completing some academic work and is expected to enroll at Iowa in the fall.

Though it's not win-or-else basketball, this is a chance for the new Hawkeyes to show fans what they've got in a competitive setting.

"I don't sit them down and say 'don't do this and don't do that,' " Iowa coach Fran McCaffery said of his new recruits. "I just tell them to play hard. Play like you have an understanding of team basketball. Compete, have fun and enjoy the experience."

The seven-team, six-game round-robin schedule and the playoffs that follow run through the end of July. Opening night offers two games at 6 p.m. and 7:30 p.m. Official summer workouts, allowed by the NCAA and conducted by the coaching staff, also started this week.

"We don't want things so over-the-top intense in July that by the time they get to Sept. 1 they're thinking, 'This is too much,' " McCaffery said. "We want them to have fun in the summer. We teach and work, and stay positive, and tell them to have go fun in the PTL. Get used to the fans, how they are and how they support us. And enjoy your teammates."

In addition to the new recruits, the PTL will be a chance for two more players who have already spent a season in the program to display their skills. Guard Brady Ellingson played in just seven games as a true freshman last season because of a foot injury. Walk-on forward Nick Baer redshirted as a freshman and is expected to contend for playing time. Baer is scheduled to play Thursday. Ellingson's team has a bye.