Junior guard out with knee injury

Iowa senior forward Jarrod Uthoff pumps his fist on his walk back to the locker room after an overtime win against Florida State on Wednesday, Dec. 2, 2015, at Carver-Hawkeye Arena in Iowa City. Bryon Houlgrave/The Register
Fullscreen

Iowa basketball coach Fran McCaffery has heated words after his Hawkeyes failed to score on a drive against Florida State on Wednesday, Dec. 2, 2015, at Carver-Hawkeye Arena in Iowa City. Bryon Houlgrave/The Register
Fullscreen

Members of the Iowa spirit squad perform a cheer routine during a timeout against Florida State on Wednesday, Dec. 2, 2015, at Carver-Hawkeye Arena in Iowa City. Bryon Houlgrave/The Register
Fullscreen 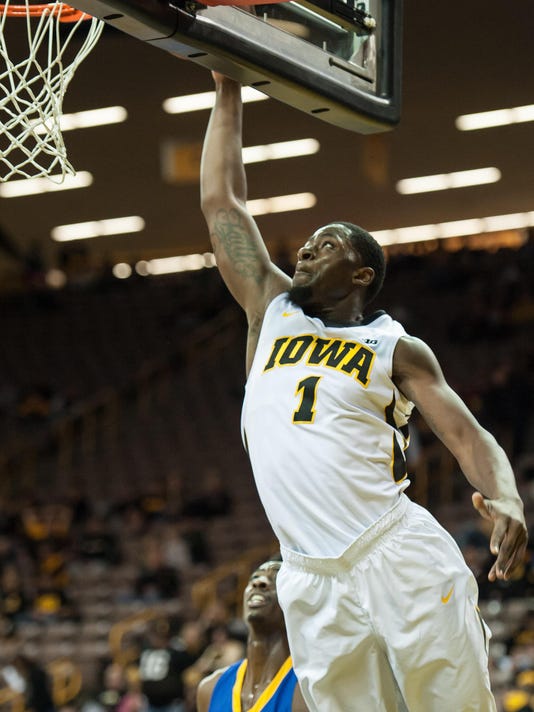 Iowa basketball coach Fran McCaffery used a nine-man rotation in Wednesday’s ACC/Big Ten Challenge victory over Florida State. Part of that was by design, part out of necessity.

Jones is averaging 5.5 points and 3.0 rebounds off the bench this season. He is shooting 45 percent from 3-point range (9-for-20) and also has shown an ability to rebound from the guard spot. He scored a career-high 16 points against Coppin State.

Jones, who is from Waterloo, redshirted the 2013-14 season at Tyler Junior College in Texas after a knee injury.

“I know the doctor is talking to him and he’s talking to his mom right now,” McCaffery said after Wednesday’s game. “He’ll have some decisions to make.”

“We’re a little bit a lighter without Dale,” McCaffery said. “ ... I thought Dom was spectacular. I thought Ahmad was really good, and Nicholas and Brady were solid.”

Iowa (5-2) has five nonconference games remaining before its Big Ten opener against Michigan State on Dec. 29. Missouri-Kansas City is the first of those five. The Kangaroos, coached by former Drake assistant Kareem Richardson, are 5-2. One of Missouri-Kansas City’s victories this season came at Drake on Nov. 21. The Kangaroos opened the season with a 76-58 loss at Minnesota.