The Register's Chad Leistikow previews Iowa's trip to the Rose Bowl, including preparation and injury updates. 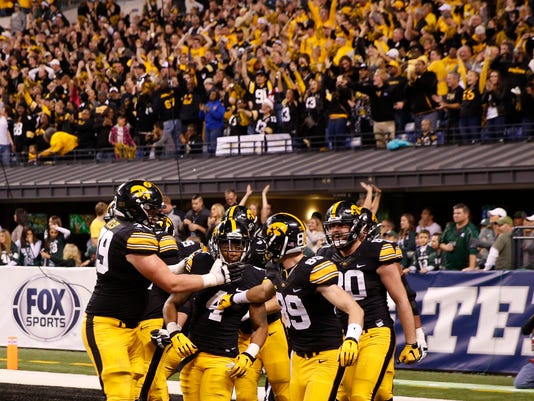 Iowa took a 13-9 lead in the fourth quarter of the Big Ten Championship Game on Dec. 5 after this 85-yard touchdown reception by Tevaun Smith. But the Hawkeyes lost, 16-13, to Michigan State and now must focus on the Rose Bowl instead of the College Football Playoff.(Photo: Brian Spurlock, USA TODAY Sports)

IOWA CITY, Ia. — There’s unfinished business being addressed in the film rooms and on the practice field at the Iowa Football Performance Center.

“We accomplished a lot,” junior quarterback C.J. Beathard said Tuesday. “But we’re not done yet.”

The Iowa junior quarterback has his eyes set on Pasadena.

Iowa football players have met the media on 14 Tuesdays since September. This one marked the first coming off a loss.

It was an important sign that the Hawkeyes continued to stay on message, carrying as united a front after the Dec. 5 Big Ten Conference championship loss to Michigan State as they did during a record-setting 12-0 regular season.

“It’s been the same — guys with their head down just working,” senior Tevaun Smith said. “Obviously, it was a bitter feeling leaving that locker room in Indianapolis (a 16-13 loss in the final minute). No one liked that feeling. It was our first loss of the season. Obviously, that’s in the back of our minds; we don’t want that feeling again.”

The Iowa senior receiver notices a big difference from 2014 to 2015.

So, just like it has been for 13 previous game weeks, the next game is Iowa's most important game. This one just happens to be the Jan. 1 Rose Bowl, pitting top-six teams in the 12-1 Hawkeyes and 11-2 Stanford.

But bowl prep has a completely different feel than it did last year, when culture change began with two-a-days after a disheartening 37-34 home loss to Nebraska to cap what was termed a disappointing 7-5 regular season by Iowa administration. Beathard and others have said the 2014 team lacked leadership. Finding new leaders started last December.

“Totally different objectives, quite frankly,” coach Kirk Ferentz said of this bowl preparation by comparison. “Last year, we were just trying to get right again. Because we clearly we were not right coming out of our last game at Kinnick (Stadium).

“I'm not saying the bowl game wasn't important, I'm not suggesting that. But what's more important is that we got our practice habits, our attitude straight again.”

Or, as receiver Matt VandeBerg put it: “Last year we needed to get our culture back and go back to what Iowa football is supposed to be about.”

The culture has been restored, and then some. Now, the challenge is maintaining it.

Ferentz’s focus since the loss to the Spartans has been to give his injured player rest; to provide time away from football to focus on academics; and fundamentals.

Now that this group is about to take a Thursday flight to California, the transition to Stanford-specific prep has begun.

“This team has really operated at a great level all season long,” Ferentz said. “And we're trying to maintain that level of preparation and hopefully carry that into our next game.”

But there are a few other lingering unknowns. First, there’s the injuries — and Iowa has another 10 days to try to get several starters up to game readiness.

Second, there’s the issue of how much the Hawkeye players want this one. Bowl games are often won by the team that has more to play for.

The Sunday afternoon following the Big Ten title loss, the four Iowa players made available to media — Beathard, Austin Blythe, Jordan Lomax and Drew Ott — were visibly having a hard time finding resounding joy in a Rose Bowl bid when they had missed the College Football Playoff by a field goal. But remember, that was still within the boundaries of Ferentz’s “24-hour rule:” After 24 hours, if you’re celebrating or sulking, it’s time to move on.

So as time has passed, The Hawkeyes seemed to have moved on. They sound like the Iowa that blew through the Big Ten regular season unbeaten, yet each week got back to work.

Practice, linebacker Cole Fisher says, has been like punching the clock, "more similar to what we do in the spring and in fall camp. Just back to the fundamentals. Just how everyone’s responded, they’ve been really good practices on both sides of the ball — really competitive practices. Just the fact that everyone’s been able to move on. ... We’re not satisfied with what we’ve done so far.”

That type of quote should put to rest any questions about the state of mind of the 18- to 23-year-old Hawkeyes. Whether Iowa can outplay and beat a Stanford team that Vegas says is a seven-point favorite — there will be plenty of time to discuss that.

But rest assured, the Hawkeyes are laser-focused on the task at hand: extending a school-record 12 wins into 13, a journey more than a year in the making.

“We needed to create a new culture at Iowa. We just needed to start somewhere. It started off in bowl prep,” Smith said. “We were working our butts off since then, doing whatever we can to develop for the next year. It’s definitely paid off. We’ve had a great year. We’re going to try our best to finish off the right way.”