Iowa out to 5-0 Big Ten start after downing Michigan

The Hawkeyes defeated the Wolverines 82-71 on Sunday

Iowa out to 5-0 Big Ten start after downing Michigan

John Beilein thinks this is going to be a good year for Hawkeye fans.

Jarrod Uthoff shoots over Michigan's Zak Irvin during the first half of the Hawkeyes' 82-71 victory over the Wolverines at Carver-Hawkeye Arena Sunday.(Photo: Zak Neumann/For the Press-Citizen)Buy Photo

Their names are Anthony Clemmons, Mike Gesell, Jarrod Uthoff and Adam Woodbury — the Hawkeyes’ seniors who have 328 combined college starts.

“And they’re good. They’re really good,” Michigan’s ninth-year coach said early Sunday evening at Carver-Hawkeye Arena. “It’s the way basketball used to be. And they’ve got it. It’s going to be a heck of a year for Iowa fans.”

Speaking of the number four, that’s how many turnovers Iowa had in Sunday’s 82-71 victory. And Beilein had a courtside vantage point for the 16th-ranked Hawkeyes’ latest impressive performance, which moved them to 5-0 in Big Ten Conference play for the first time in 19 seasons.

Come Monday, more benchmarks will likely be reached. Iowa (14-3 overall) is nearly certain to be deemed an Associated Press Top-10 team for the second time under head coach Fran McCaffery.

McCaffery's fourth team rose to 10th for just one week, in the Jan. 20, 2014 poll, but lost its next game at Michigan and ultimately tumbled all the way into an NCAA Tournament First Four game. The Hawkeyes haven’t been higher than 10th since 2002.

They will probably jump at least six teams ahead of them, including No. 4 Michigan State — which lost twice this week, including by 17 Thursday at home to Iowa. Also likely to see Iowa zoom past them: No. 8 Miami (Fla.), No. 9 Duke, No. 12 Providence, No. 14 Kentucky and No. 15 Texas A&M. There could be others, too. Somewhere between seventh and ninth is a safe bet.

“We’ve been there before. The little number next to your name means nothing right now,” said Woodbury, who had a solid game with 12 points, six rebounds, two assists, no turnovers and one breakaway dunk. “All that matters is what you do in March, and through March. The numbers are for the fans, honestly.” 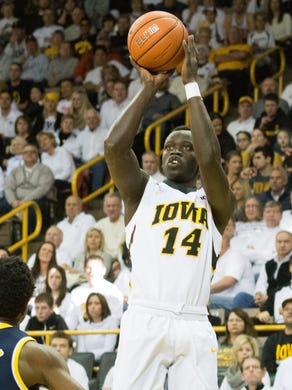 Dom Uhl handles the ball during the second half of the Hawkeyes' 71-82 victory over the Wolverines at Carver Hawkeye Arena. Sunday, January 17, 2016. Zak Neumann/For Iowa City Press Citizen
Fullscreen

Nicholas Baer handles the ball against Michigan's Aubrey Dawkins during the second half of the Hawkeyes' 71-82 victory over the Wolverines at Carver Hawkeye Arena. Sunday, January 17, 2016. Zak Neumann/For Iowa City Press Citizen
Fullscreen

Hawkeyes' head coach laughs after and interaction with an official during the first half of the Hawkeyes' 82-71 victory over the Wolverines. Sunday, January 17, 2016. Zak Neumann/For Iowa City Press Citizen
Fullscreen

Nicholas Baer fights for the ball against Michigan's Derrick Walton Jr. during the second half of the Hawkeyes' victory over the Wolverrines at Carver Hawkeye Arena. Sunday, January 17, 2016. Zak Neumann/For Iowa City Press Citizen
Fullscreen

Peter Jok passes the ball over Michigan's D.J. Wilson during the first half of the Hawkeyes' 82-71 victory over the Wolverines at Carver Hawkeye Arena. Sunday, January 17, 2016. Zak Neumann/For Iowa City Press Citizen
Fullscreen

The last time Iowa opened 5-0 in the Big Ten was with Tom Davis’ 1996-97 Hawkeyes led by Andre Woolridge.

“Every time we step on the court, we’re going to be the best team on the court,” Iowa junior Peter Jok said. “We believe in ourselves.”

Sunday’s game teeter-tottered for a good chunk of the second half until, believe it or not, Iowa’s star went to the bench. With Uthoff sitting from the 12-minute, 46-second mark until 6:05 remained, Iowa extended its lead from 51-49 to 68-57.

Jok had a lot to do with that. The junior from West Des Moines Valley, who starred with 23 points in Thursday’s rout at Michigan State, filled the nets Sunday, scoring 14 of his 16 points after halftime — going 4-for-4 from 3-point range.

A lineup of Gesell/Clemmons (13 combined assists) at the point with Jok, Nicholas Baer, Ahmad Wagner and Dom Uhl clicked as Uthoff and Woodbury were on the bench.

McCaffery’s thought process was: “Let's get him out before the media timeout and get him right back in. But when that team took off, I thought, you know what, it might not be bad because when I put him back in, he’ll be fresh all the way to the end of the game.”

The Hawkeyes extended their lead from 2 to 11 with their star on the bench.

That’s exactly how it played out. Uthoff hit a 3 just 23 seconds after re-entering, and he scored another six points down the stretch to finish off the gritty Wolverines (13-5, 3-2 Big Ten), who were again playing without injured star Caris LeVert.

Uthoff, the Big Ten’s leading scorer, finished with 23 points and four rebounds in 28 minutes — three days after a monumental program victory. There was no letdown against a very dangerous 3-point shooting Michigan team.

Now, all that’s separating the Hawkeyes from a 6-0 Big Ten start is a Thursday date at Rutgers, which has lost its last four Big Ten games by an average margin of 26.8 points.

“It’s just awesome what we’ve been able to accomplish so far, and we’ve got so much more to accomplish,” Woodbury said. “It’s exciting, obviously. Everybody’s coming out and supporting us, which was great to see. We’ve got a long road ahead of us though.”

The Iowa center also compares this year's team to the last three.