No. 3 Iowa suffers first Big Ten loss of season at No. 8 Maryland

No. 3 Iowa suffers first Big Ten loss of season at No. 8 Maryland 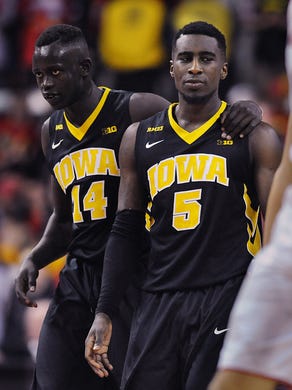 Jarrod Uthoff of the Iowa Hawkeyes puts up a shot over Jake Layman of the Maryland Terrapins in the first half at Xfinity Center on January 28, 2016 in College Park, Maryland. Rob Carr/Getty Images
Fullscreen

Rasheed Sulaimon of the Maryland Terrapins and Dom Uhl of the Iowa Hawkeyes go after a loose ball in the first half at Xfinity Center on January 28, 2016 in College Park, Maryland. Rob Carr/Getty Images
Fullscreen

Mike Gesell of the Iowa Hawkeyes puts up a shot in front of the Maryland Terrapins in the first half at Xfinity Center on January 28, 2016 in College Park, Maryland. Rob Carr/Getty Images
Fullscreen

Adam Woodbury of the Iowa Hawkeyes puts up a shot in front of Robert Carter of the Maryland Terrapins in the first half at Xfinity Center on January 28, 2016 in College Park, Maryland. Rob Carr/Getty Images
Fullscreen

Iowa Hawkeyes guard Mike Gesell (10) dribbles up the court during the first half against the Maryland Terrapins at Xfinity Center. Tommy Gilligan/USA TODAY Sports
Fullscreen 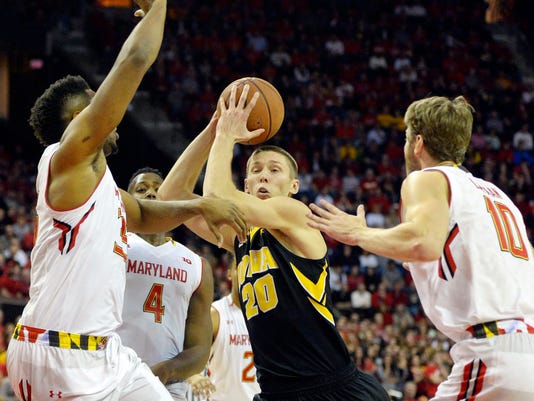 “I played terrible the whole game,” Jarrod Uthoff said after scoring a season-low nine points on 2-for-13 shooting in a 74-68 loss to No. 8 Maryland. “That’s how it goes sometimes. I tried to get myself going any way I could.”

But this loss, which changed the complexion of the Big Ten race, wasn’t all on Uthoff.

His teammates couldn’t get going, either – 5-for-24 from 3-point range, 21 percent. Seven players in Iowa’s nine-man rotation are proficient at shooting the 3, yet not one of them got hot before a sold-out crowd of 17,950 at the Xfinity Center.

“They came ready to play,” said Jok, who led Iowa with 14 points but hit just 2 of 6 from 3-point range. “They were really physical. We didn’t move the ball like we usually do.”

Nine assists, 11 turnovers. The performance all-around was out of character for the Hawkeyes. Yet they still had a chance to steal this one in the final minutes.

Iowa’s Mike Gesell went to the free-throw line with 1:48 left and Iowa down 62-60, but missed the front end of a one-and-one.

Maryland responded with a Diamond Stone dunk out of a timeout, then turned a Gesell turnover into a Jared Nickens fast-break layup for a 66-60 lead with 1:11 left.

“There’s really nothing to hang our heads about,” said Gesell, who was held to one assist and four turnovers. “We didn’t play our best game and we still had a chance to win it.”

The Terrapins (18-3, 7-2 in the Big Ten) salted it away from there, surviving the only regular-season meeting between the teams despite their own long-range shooting struggles – 6-for-25 overall, 0-for-10 in the second half.

“We showed some toughness in the second half,” Maryland coach Mark Turgeon said. “We weren’t great on offense, and we just kept guarding.”

Toughness had actually been Iowa’s calling card in recent weeks, as it stormed from being unranked in the Associated Press poll to into the top five for the first time in 27 seasons. Give the Hawkeyes credit for hanging in there Thursday despite the subpar stats.

But on Thursday, Uthoff used another “T” word to describe Iowa.

“We got tentative,” Uthoff said.

The Iowa senior had nine points on 2-for-13 shooting.

Uthoff, who entered as the Big Ten scoring leader, never got going. He shot 0-for-5 in the first half. In the second, after being held without a field goal in a half for the first time since the season opener against Gardner-Webb, he said he tried to force the action.

“(Maryland) had a good game plan,” Gesell said. “They really mugged JU and Pete the whole game. It was tough to get them open at times.”

Iowa (16-4, 7-1) had its nine-game winning streak snapped and fell into a first-place tie with Indiana, which it will meet twice in the next 33 days. Had the Hawkeyes won, they and Indiana would have separated themselves from the pack, with preseason favorites (Maryland, Michigan State, Purdue) each having at least three conference losses.

Instead, get ready for a free-for-all in the next 5½ weeks.

The message from coach Fran McCaffery after his team’s first regular-season Big Ten loss in 347 days?

“No screaming and yelling at the team,” McCaffery said after coaching a top-five team for the first time in his 20-year career. “Because we didn’t play our best game, and we were still right there with 2 minutes to go. I think that says something about the character of the team.”