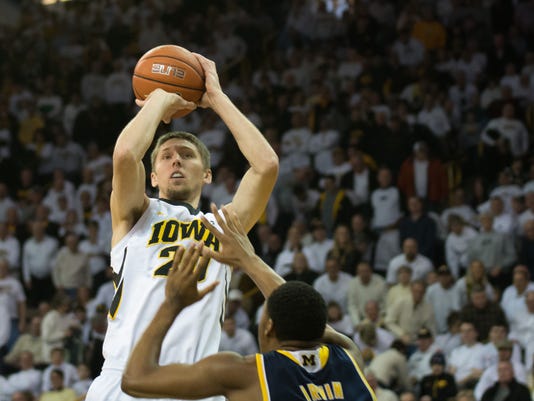 The Iowa men's basketball team is on the regional cover of Sports Illustrated this week following an appearance by the football team in late November. Seniors Mike Gesell and Jarrod Uthoff are both pictured on the hoops version, with Uthoff the main subject of the magazine's story.

"I think it’s great," Iowa coach Fran McCaffery said Tuesday of the SI cover. "I’m really happy for Jarrod in particular, but also for all the guys to be recognized at that level. It’s reflection of what they’ve accomplished. You always want that to be the case for your guys. When you see them working as hard our guys work, you want to see them recognized properly. It’s a terrific honor. Great respect for that publication. We’re happy to be on it." 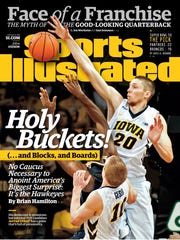 It's no surprise that Uthoff is at the center of the cover.

If anything, the cover provides another moment of reflection for Uthoff and fellow seniors Gesell, Anthony Clemmons and Adam Woodbury. The veteran foursome were being recruited while Iowa won only 11 games in McCaffery's first season at the helm in 2010-11. The Hawkeyes are since winners of 18 or more games each year, including two berths in the NCAA Tournament.

"It’s about us as the Hawkeyes and what we’ve accomplished as a team," Uthoff said. "It’s not about what I’ve done as an individual. We’ve come a long way with this program and with this year. People predicted us to be at the bottom of the Big Ten and we’re proving we can play with anybody."

Following a 1-1 performance last week with a loss to Maryland and a victory over Northwestern, next up for Iowa is Penn State on Wednesday and Illinois on Sunday.

"They still change defenses, they’ll still play some three-quarter court, they’ll still mix in some zone," McCaffery said. "Look at the numbers. They’re going to foul a lot, they’re going to crash. There’s going to be a lot of activity around the glass. You need to be ready to play that way when you play them." 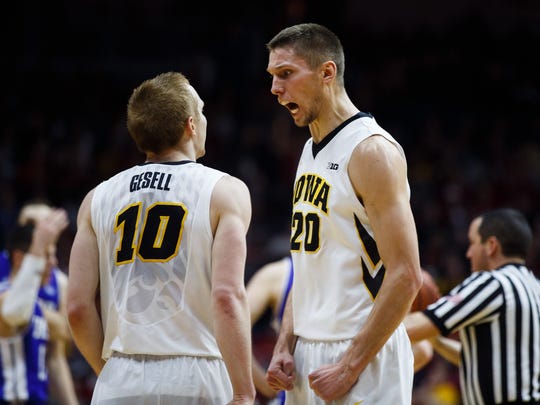 Iowa teammates Jarrod Uthoff and Mike Gesell Were being recruited in Fran McCaffery's first season when the Hawkeyes were just 11-20. Since then, the Hawkeyes won 18 more games each year, recorded two berths in the NCAA Tournament and are No. 7 entering Wednesday's game against Penn State. (Photo: Brian Powers/The Register)

But will recent success — and notably recent recognition worthy of a Sports Illustrated cover — be hard to sustain?

"I don’t think it makes it any harder," Gesell said. "All year our team has done a tremendous job. We get lots of media coverage every year at Iowa, we’re pretty much the pro team around here. We’re used to that spotlight. Everyone’s handled it very well this season.

"It’s cool to get recognition like that. Especially for the university with the season football had and now the season we’re having. It’s an exciting time to be a Hawkeye."