No. 7 Iowa has no trouble with Penn State

No. 7 Iowa has no trouble with Penn State 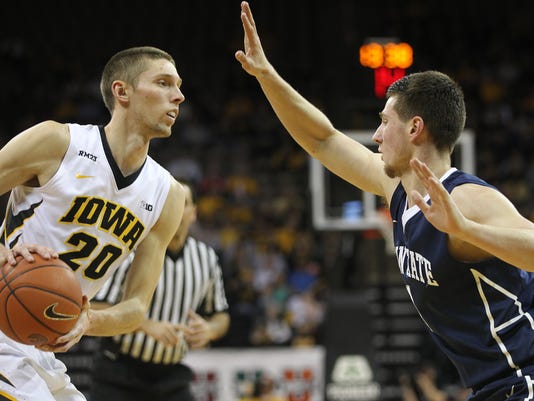 There were no surprises Wednesday night.

"Right from the outset, our defense set the tone," Iowa coach Fran McCaffery said. "We got stops, we got run outs. We established how we wanted to play."

The Iowa junior marvels at the play of the two seniors.

Iowa emptied its bench as all 14 active players logged time on the hardwood. No starter played more than 27 minutes. Uhl, Baer, and Wagner all recorded significant playing time with 20, 19, and 17 minutes, respectively.

The Iowa coach wanted to play him even more in a rout of Penn State.

Missed shots by Penn State plus a consistent defensive effort resulted in the Hawkeyes allowing season-lows of 49 points and 30 percent shooting. The previous scoring low was 59 points in the first game of the season to Gardner-Webb and then Jan. 14 to Michigan State.

Penn State also went cold from the the 3-point line, going 1-of-20 from beyond the arc.

"Obviously, Iowa’s a great team," Penn State coach Patrick Chambers said. "I apologized to Franny, we didn’t give them much of a game. You can’t play a great team, a top-five team, and shoot 1-for-20.”

Iowa shut the door on any glimmer of hope Penn State mustered in the first half. The Nittany Lions narrowed the deficit to nine points with less than six minutes to go, but the Hawkeyes promptly went on a 16-4 run into the break to stake out a 45-26 advantage at halftime.

Perhaps the performance on defense led to the offensive barrage.

"When we got in space, we made things things difficult for them," Uthoff said. "That definitely fueled our transition game and fueled our offense. Any win in the Big Ten is a good win."

The walk-on from Bettendorf had a 2016-high 8 points vs. Penn State.

There were no hiccups Wednesday. Iowa cruised from the opening tip, never once trailing.

But that's what should be expected from one of the top teams in the nation at this stage of the year, especially when going up against an inferior opponent.

A referee is reflected off the hardwood during the Hawkeyes' game against Penn State at Carver-Hawkeye Arena on Wednesday, Feb. 3, 2016. David Scrivner / Iowa City Press-Citizen
Fullscreen

Teammates high-five Ahmad Wagner as he heads to the bench during the Hawkeyes' game against Penn State at Carver-Hawkeye Arena on Wednesday, Feb. 3, 2016. David Scrivner / Iowa City Press-Citizen
Fullscreen 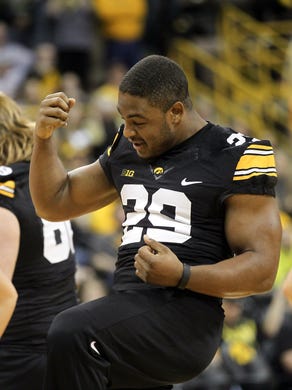 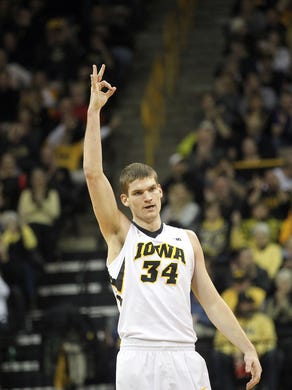