Hawkeyes playing for more than senior sendoff in home finale

There’s still a lot at stake for the 15th-ranked Iowa basketball team in Tuesday's 8 p.m. game vs. Indiana.

Hawkeyes playing for more than senior sendoff in home finale 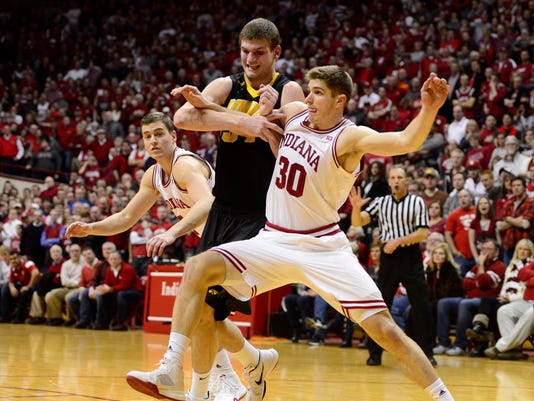 IOWA CITY, Ia. — There’s still a lot at stake for the 15th-ranked Iowa basketball team, which is why honoring a senior class that has won 87 games over four years will be little more than a side story Tuesday night.

As a group, they’ve scored 3,735 points in 372 starts and with a home win they would tie the school record of 59 set by last year’s senior class.

Jarrod Uthoff on faith, love, basketball and his Iowa legacy

“I don’t get into the emotional side of it, to be honest with you,” Iowa coach Fran McCaffery said. “I’ve been on record as saying I wish we could do away with senior day and celebrate those guys at the (postseason) banquet the way they need to be celebrated.”

There’s a reason that Woodbury said after Sunday’s crushing 68-64 loss to Ohio State that senior day “means nothing if we don’t win. Plain and simple.”

Despite four losses in their last five games, a slide that started Feb. 11 in Bloomington, Ind., the Hawkeyes (20-8, 11-5 Big Ten) would still tie for a conference championship at 13-5 — with up to four other teams — if they win Tuesday, then Saturday at Michigan and Indiana loses its Sunday home finale vs. No. 12 Maryland.

And if Iowa wins out and Indiana beats Maryland, it can be no lower than a No. 3 seed March 9-13 in Indianapolis. Winning out also would greatly help the Hawkeyes' chances to play NCAA Tournament games in Des Moines.

Those uncertainties will sort themselves out, but one thing Iowa fans can be sure about is that McCaffery wants Uthoff, the Big Ten’s No. 2 scorer, to be more assertive on offense.

Uthoff did not take a shot in Iowa’s final nine possessions at Ohio State.

“I’d just like to see him be more aggressive,” McCaffery said Monday. “Whenever it comes to Jarrod in terms of what I try to do for him … it’s not drive more, post more, shoot more 3s, shoot less 3s. It’s never anything specific like that. It’s be more aggressive. That’s all I want him to do.”

Tickets: Standing-room only seats were available as of Monday afternoon.