Jarrod Uthoff was patient and worked hard. Simple enough, but that’s why on Monday he became one of the most decorated Iowa basketball players in decades. 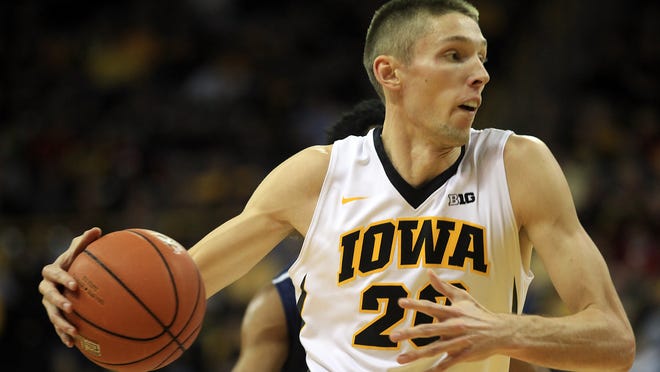 Uthoff was a unanimous all-Big Ten Conference first-team selection by the league's media and coaches, unveiled during a Big Ten Network special Monday night, and teammate Peter Jok was named to both second teams.

Uthoff's selection the first time since the 1940s that the Hawkeyes have put a player on the league’s five-player first team in three straight seasons.

Earlier Monday, Uthoff was named a third-team all-American by USA TODAY, the first of many honors expected to be rolled out by national organizations in the coming days and weeks. The last time Iowa had any player exceed honorable-mention all-American status was when Andre Woolridge was a Basketball Times first-teamer and AP third-teamer in 1997. Before that, you have to go back to Ronnie Lester in 1980.

Uthoff’s college playing career only spans three winters after he sat out his first two years — redshirting at Wisconsin, then sitting out again after transferring to Iowa. But the former Cedar Rapids Jefferson alum still ranks No. 20 all-time in Hawkeye scoring at 1,238 career points, including 564 this year.

“As you well know, he’s had an interesting journey,” McCaffery said. “You talk about accomplishment, and we all know that you just don’t end up there. You work your way to get there. And he’s one of the most incredible workers I’ve ever been around.

“In the beginning, he had some bumps in the road. He stayed true to who he was, continued to work. And he continued to believe in himself. And he made it happen. I’m just thrilled to be a part of it.”

Uthoff also picked up unanimous first-team all-Big Ten status from the Associated Press on Monday. Jok, who finished sixth in Big Ten-only stats at 17.3 points per game, was named to the AP's all-Big Ten second team. The AP's all-American teams will be released later this month.

McCaffery, in Monday’s Big Ten coaches’ teleconference to preview this week’s conference tournament, said of the 21-9 Hawkeyes, who dropped three spots to No. 18 in the USA TODAY Coaches' Poll: “I feel really good about where our team is now, and I’m excited.”

His team tied for third place in the league for the second consecutive year — yet will be the No. 5 seed in the league tournament for the second consecutive year. Purdue, which Iowa swept but had an identical 12-6 conference record, got the No. 4 and a double-bye this week in Indianapolis. Meanwhile, the Hawkeyes get the Illinois-Minnesota winner on Thursday.

There was a four-way tie at No. 3 this year, and here’s how it broke down: Maryland got the 3 spot by posting the best round-robin record (3-2) among the four tied teams; Iowa and Purdue were each 2-2 in the round robin, and Wisconsin was slotted No. 6 because of a 2-3 mark.

To break Iowa-Purdue tie, the conference goes by record against the team “occupying the highest position in the final regular-season standings, continuing down through the standings until one team gains an advantage.” Iowa went 0-2 vs. first-place Indiana; Purdue 0-1. Iowa went 2-0 vs. second-place Michigan State; Purdue 1-0. The four tied teams are skipped, and Purdue got the 4 seed by virtue of its 1-0 record vs. seventh-place Ohio State over Iowa’s 0-1.

“To be honest with you, I’ve never really studied it,” McCaffery said. “We just play the games. I’m fairly certain the tiebreaker formula is a fair one. … So I look at it like this: You want to move up? Win more games.”

So much can fluctuate with this week’s conference tournaments, but generally speaking Iowa is predicted to be a No. 5 or 6 seed in the NCAA Tournament. The Selection Committee will begin bracketing procedures on Wednesday in New York and finalize the 68-team field Sunday, but the NCAA told the Des Moines Register last month each committee member evaluates six computer-rating systems to help make decisions.

In one bracket produced by NBC Sports on Monday, Iowa was a No. 5 in Oklahoma City and in the same four-team pod as No. 13 seed Northern Iowa, which gained automatic entry with Sunday's Missouri Valley Conference tournament championship. That would be fun.