The junior from Muscatine was slowed by mono and a sprained ankle, but has coaches and scouts raving about his upside

Iowa basketball recruit Joe Wieskamp shows off his shooting form Sunday at tryouts for his AAU team in Mount Vernon. The Muscatine junior is back at full health after a summer spent battling mononucleosis and a sprained ankle.(Photo: David Scrivner/Press-Citizen)Buy Photo

MOUNT VERNON, Ia. — Joe Wieskamp is two years away from playing at Carver-Hawkeye Arena, but he’s been imagining himself in Peter Jok’s shoes.

Jok is the star of the moment for the Iowa men’s basketball team, a 6-foot-6 guard with a deep shooting range.

Wieskamp, a Muscatine High School junior, has a shot to be the Hawkeyes’ star of the future, and he’s very much in Jok’s mold. Iowa coach Fran McCaffery advised Wieskamp to visualize himself in black and gold when watching the team play last winter. Wieskamp’s eyes would inevitably drift to Jok, who averaged 16.1 points per game and was second-team all-Big Ten Conference as a junior.

“Running off screens, catch, shoot,” Wieskamp said of the similarities in style.

Wieskamp is also 6-6, though hopeful he might gain another inch or two while his high school career plays out. He verbally committed to Iowa last June after impressing everyone who saw him on the AAU circuit, where he’s been competing for the Iowa Barnstormers since sixth grade. Wieskamp is a four-star recruit by Scout.com and rated as the 13th-best small forward in the 2018 class. ESPN has him ranked No. 25 overall on its top-60 list for that class.

At a tryout session for his AAU program Sunday at Mount Vernon Middle School, Wieskamp looked the part, running the floor with ease in scrimmages, showing range and a high release on a smooth jump shot, driving past would-be defenders and absorbing contact at the rim, even draining a quick catch-and-release turnaround jumper from the wing. He was, as you would expect, the best player on the court.

Hawkeyes columnkst Chad Leistikow lays down his predictions for how he thinks teams will fare in the Big Ten Conference this season.

But the easy abandon he played with last week masked what was a trying summer for Wieskamp. For the first time in his young career, he was forced to deal with medical issues that hampered his performance. At the beginning of summer, he contracted mononucleosis, which sapped him of 12 pounds of weight while severely curtailing his stamina. Wieskamp said that illness lingered for a month.

As soon as he shook off the mono, he sprained an ankle, which sidelined him for another week-and-a-half. Wieskamp was invited to attend the National Basketball Players Association Top 100 camp in Virginia in June, but was too weak to play in the actual games, only running through some drills and listening to the lectures.

“He lost weight and couldn’t bang with people the way he normally can. He lost a step of his quickness,” said K.C. Schmitt, who has been Wieskamp’s Barnstormers coach for four years. “I think the adversity that he faced, getting through all that, will help him more than anything he could learn on the floor. Because he’s always been probably one of the top five to six guys in the country as far as skills. He’s more athletic than people give him credit for. That was the hardest thing he’s ever done was go through mono and not be able to play at a high level. And he got through it. And now he’s better for it.”

Wieskamp still played in 48 games for the Barnstormers, leading his team with 16.4 points per game and adding 5.1 rebounds, even after his weight dropped to 175 pounds. He’s put those pounds back on now and is looking forward to his junior season at Muscatine, eyeing the school career scoring record of 1,066. He should break that with ease, as he’s only 150 points away.

Reggie Rankin, recruiting analyst for ESPN, sees a little bit of Jok in Wieskamp as well, especially when it comes to shooting.

“I think this kid can create more matchup problems. He can be moved around within the offense a little more, put in different spots to take advantage of his skill level,” Rankin said.

“He’s got great shot preparation. When he catches it, he’s ready to shoot it. I think Fran can run him off screens, I think he can get him in space where you can penetrate and kick to him. I think he can be productive right away because I think Fran will put him in the right positions.”

Wieskamp said it wasn’t a wasted summer for him. He was able to start developing two areas of his game that he knows need to improve in order to compete at the Division I level – his ball-handling and passing. Wieskamp said McCaffery told him he wants to see the young wing player grab defensive rebounds and immediately dribble up-court, instead of waiting to pass to a point guard.

“He said that’s what he’s going to want me to do in college,” said Wieskamp, who was a post player when he was younger. “And I want to focus on getting my assists up, just be more complete.”

Schmitt also said passing is the weak point in Wieskamp’s game right now, primarily because he’s never been asked to do it much. On his AAU team, Wieskamp plays alongside superb point guard A.J. Green, who usually delivers the ball to him in the right spot at the right time.

“And (Wieskamp) doesn’t ever give it up to anybody, so he doesn’t have to worry about passing. At the next level, he will,” said Schmitt, who has no doubt Wieskamp will develop the ability to pass.

“Everything we’ve thrown at that kid, he picks up in a day or two. And he works on it until he masters it. He’s that kind of kid.”

Schmitt believes Wieskamp will be a defensive asset as well in college, although he probably needs to get a step faster laterally. Rankin said it will be a matter of Wieskamp learning to use his height as his primary asset. 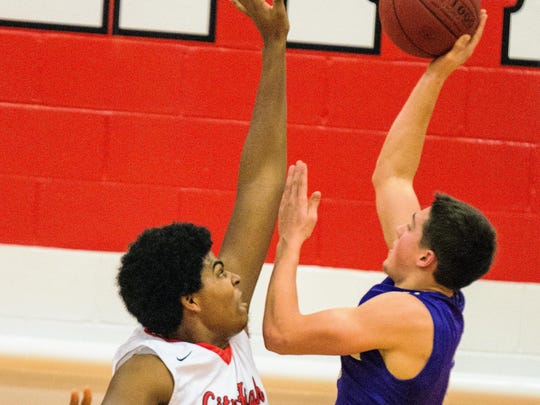 “I wouldn’t call him a pressure defender. I’d call him more of a position/length defender, an angle defender,” Rankin said. “He’s not a guy you’re going to send up and try to get in a guy’s chest and turn him.”

Wieskamp is naturally quiet but is trying to become more assertive, both in the locker room and on the court. As the star of a Muscatine team coming off a 15-8 season, he’ll need to be the one exhorting less experienced teammates. Even as an incoming Hawkeye, he’s learning to become a salesman.

He’s working on fellow junior Joey Hauser, a power forward from Wisconsin who ranks 22nd on ESPN’s list, to choose Iowa. At the NBPA Top 100 camp, Wieskamp and Connor McCaffery, Fran’s son who is coming to Iowa next season, were politicking Luka Garza to become a Hawkeye. Garza is a four-star recruit at center who has Iowa on a long list of schools under consideration.

“As soon as I committed, (Hawkeyes assistant) coach (Kirk) Speraw was like, ‘You’ve got to start recruiting. Get the guys that you want to play with,’” Wieskamp said. “So it’s kind of part of the process.

“With how good of a player (Hauser) is, obviously I want him to come. You’ve got to let him make his decision but constantly be in his ear.”