The Iowa coach speaks after a 91-74 win over Kennesaw State. 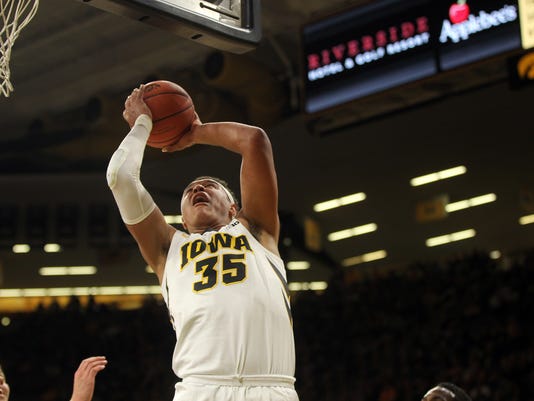 IOWA CITY, Ia. — If Tyler Cook is the electrifying future of the Iowa men’s basketball program, Cordell Pemsl is its homage to a past era.

Cook, the most touted of the Hawkeyes’ freshman class, may have gotten the start Friday in a season-opening 91-74 romp past Kennesaw State in front of an announced crowd of 13,007 at Carver-Hawkeye Arena, but it was fellow rookie Pemsl who showed the niftiest finishing moves around the basket.

Pemsl, with a style of play reminiscent of the crafty old-timer at your local YMCA, came off the bench to score 10 points and grab six rebounds. And it could have been much more if he hadn’t clanked five of his seven free-throw attempts.

The freshman from Dubuque, wearing a brace on his surgically repaired right knee and a throwback white headband, used shoulder fakes and drop steps like a veteran to confound the Owls’ defense and convert short bank shots.

“I’ve always been mature about my game. Because I knew I wasn’t the guy that was going to explode off the floor and dunk on you every single possession,” said Pemsl, a 6-foot-8 forward. “So I’ve taught myself to use angles and different positioning to get better looks. It’s worked for me my whole life. I’m just going to stick to it.”

Pemsl didn’t even see his first career basket fall. He stole the ball and headed downcourt, with Kennesaw’s Josh Burnett backpedaling in the lane. Pemsl leaped into Burnett’s chest and tossed up an awkward-looking finger roll before thumping to the floor. The referee whistled Burnett for a foul.

“I had no idea it went in until he said the bucket was good,” Pemsl said.

“That’s when I knew it was my night.”

Cook, meanwhile, missed his first four shots, took a hard fall onto his tailbone that required a quick trip to the locker room and appeared to be forcing the issue. He eventually scored his first basket on an alley-oop feed from guard Peter Jok and finished with six points and a team-high 10 rebounds.

“We’re not too worried about it,” said Iowa forward Ahmad Wagner, who scored 12 points off the bench. “He had an off night, but we know what type of player he is and what he’s capable of.”

The Iowa sophomore had 12 points, 5 rebounds, 4 assists and 4 blocks in the opener.

Jok, as expected, was Iowa’s leading scorer, with 27 points. The all-Big Ten Conference pick had the answer whenever Kennesaw State tried to make a run, making 11 of 19 shots.

Guard Nick Masterson made his first six 3-pointers and finished with 29 points to help the Owls keep things interesting until midway through the second half.

Sophomore Christian Williams started at point guard and led the Hawkeyes with five assists to go along with four points, two steals and an emphatic blocked shot. He didn’t play in the final 17 minutes after heading to the bench with an aching back. Coach Fran McCaffery said Williams could have returned if needed, and Williams said he expects to be fine for Sunday’s game.

Ultimately, the night belonged to Pemsl, who needed some reassurance from his teammates before his college debut.

“He was worried about the mechanics of the game and doing everything right and just being real particular,” Wagner said. “We told him, ‘Just go out there and play.”

“I knew I was capable of doing what I did,” Pemsl said. “It was definitely refreshing to know that at this level I could be comfortable playing my role.”