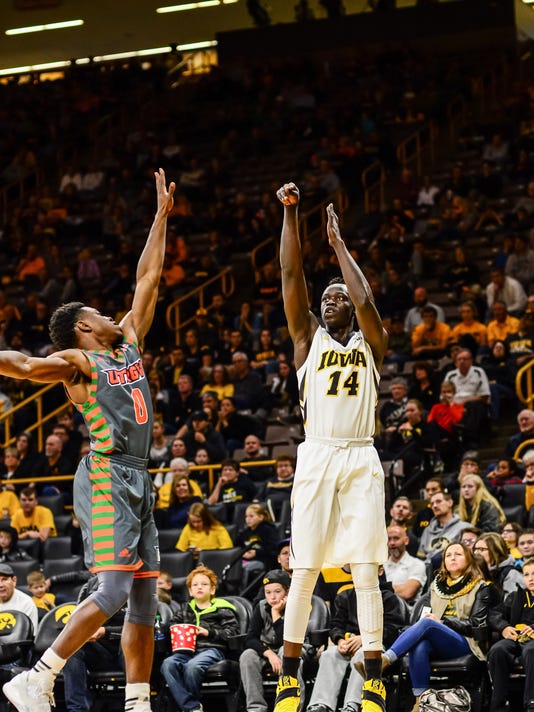 IOWA CITY, Ia. — This time, Peter Jok was ready when defenders gave him room to shoot.

The Iowa star guard is used to being harassed as soon as he steps on the court. But Savannah State backed away from him Nov. 13, and Jok had his worst shooting game of the season.

Texas-Rio Grande Valley tried a similar approach Sunday, and Jok made the Vaqueros pay. The senior made 9 of 13 shots and scored 27 points in just 19 minutes to lead a 95-67 victory before an announced crowd of 11,596 at Carver-Hawkeye Arena.

“I actually thought about it too much because I like being contested. I wasn’t focused. I came out, took it for granted,” Jok said of that 5 of 15 performance a week ago. “Tonight, I knew it was going to be kind of a similar game so I had to find a way to keep focused.

“I was trying to start the game hot and get everybody to follow me. I was at my pace. I didn’t let them rush me or anything. I knew we were going to get a lot of open shots. They like to press and the backcourt is really open.”

Hawkeyes must shore up interior defense

Jok made his first two 3-pointers, and the Hawkeyes (3-1) quickly built a 15-point lead. There was a lull in Iowa’s effort later in the half, but the Hawkeyes regained control at the outset of the second half to put the game away.

The only time Jok was slowed came with 16:13 left in the game after he inadvertently banged knees with the Vaqueros’ Walter Jones on a drive to the basket. Jok grimaced in pain, but stuck around to make the free throws before heading to the locker room to walk off the injury. He never played again, but said he could have if needed.

“We was up by a lot. I wanted the other guys to play a lot, too,” Jok said. “I was just really proud of the bench guys.”

Iowa next plays Virginia at 6 p.m. Friday in the Emerald Coast Classic in Destin, Fla.

Other takeaways from Sunday:

It was rough going for the Hawkeye second unit in the first half. They got careless on offense, wandered on defense and let UTRGV cut the lead to eight points. After an Isaiah Moss turnover, coach Fran McCaffery subbed out all five players.

The second half was a much different story. Freshman point guard Jordan Bohannon showed terrific leadership in keeping the reserves composed. His shot wasn’t falling (1-for-7), but he had five of his six assists after halftime and played 24 minutes. Moss had a career-high 14 points and Brady Ellingson added 11 off the bench. All of that scoring came in the final 16 minutes.

“He really got into us, and I think that really fired us up and gave us more energy,” Bohannon said of a fiery halftime message from McCaffery.

“He’s kind of getting into me to get them organized and start calling some plays.”

Iowa’s post players ran the floor with abandon in the second half, and Bohannon was always looking for them.

“We have guys that can run the floor really well,” Bohannon said. “And we push the ball really well so we can find those guys.”

Moss, a redshirt freshman guard, entered play 4 of 16 from the field in 25 minutes of play. He launched 13 of those attempts in the Savannah State victory.

On Sunday, he needed only seven shots to get his 14 points. Starting forward Nicholas Baer liked what he saw.

“He’s a bucket-getter. He’s aggressive. He didn’t show any hesitancy at all, and I was impressed with that,” Baer said.

“I think last year he was a little tentative in practice and I think the coaches have been trying to derive the aggressiveness out of him. I think we’re finally getting to see that now and that’s the best Isaiah Moss we see is when he’s aggressive. So the more aggressive he is the better it will be for us.”

“He just keeps working. He’s a big presence in the post. He gets tall. He wants to post. He runs the floor. He screens and gets people open,” McCaffery said of the 6-foot-9 Kriener.

Pemsl was limited to six minutes and one point.

The star-crossed basketball career of Dale Jones took another anguishing turn Sunday with word that the senior forward will miss eight to nine weeks after fracturing his right wrist in Thursday's game against Seton Hall.

Jones, a Waterloo native, was already working his way back from a second knee surgery. Swelling in the knee kept him out of Iowa's first two games this season.

In the third game, Jones made his season debut late in the first half and suffered the injury after only two minutes on the court.

“I feel awful for him,” McCaffery said. “I gave him a hug at practice. He walked in, he’s got the cast on it, walked over and gave him a hug and said, ‘It’s going to happen for you this year. Just got to stay positive.’ He’s had an unbelievably positive attitude. I thought now he would be as down as he’s ever been. He’s been good. I’ve been really impressed with his maturity, helping the other guys, being a leader.”

Jones transferred to Iowa in 2015 after three years at Tyler Junior College in Texas, where he missed one season after suffering his first knee injury in 2014. He played seven games for the Hawkeyes last year before another knee injury sustained in a Dec. 1. practice ended his season.

Jones is one of only two seniors on Iowa's roster, the other being Jok.