Hawkeyes have lost three straight, with Peter Jok complaining of a back injury every time while his coach downplays it

Iowa guard says his back tightened up in loss at Illinois

CHAMPAIGN, Ill. — Back injuries can be tricky, as anyone who’s suffered one knows.

Spasms or a stiffening of muscles can occur seemingly at any time and without warning. It’s difficult to know when full healing has occurred.

Still, it’s becoming bizarre to listen to the different takes being offered on Iowa guard Peter Jok’s back. It’s been a topic of discussion throughout the Hawkeyes’ three-game losing streak and was again after Wednesday’s latest setback, 76-64 at Illinois.

“I think he’s OK. You have to ask him,” Iowa coach Fran McCaffery told reporters after being queried yet again about Jok’s troubled back.

That’s a variation of what McCaffery has said all along, beginning with his postgame comments after the Jan. 15 89-54 loss at Northwestern when he first revealed that Jok’s back was bothering him. Jok scored a season-low four points in that one, barely playing in the second half with the game out of reach.

Jok played 32 minutes against Illinois but scored only 10 points — less than half his average of 21.6 — on 3-of-9 shooting. He added two rebounds, one assist and four turnovers. This was after a bye weekend in which the Hawkeyes star got three days away from basketball. He is shooting 30 percent (9-of-30) during the losing skid.

“I’m just not 100 percent. I thought it got better the last few days,” Jok said. “As the game went on, it just started tightening up.”

How is it affecting his play?

“I feel like just making moves, staying low and also a little bit shooting. My balance has been off because my back will stiffen up so I really can’t stay low in shooting,” Jok said. “And then also defense a little bit. When I get low on defense, it’s kind of bothering me, too.”

Jok is Iowa’s only senior and was the only player in McCaffery’s starting unit for both halves Wednesday, a sign of his value to the team and the trust his coach still places in him. He didn’t appear to be affected by the back injury at the outset of the game, yet continued a troubling trend of ineffective play in the first halves of Big Ten Conference road games.

Jok had four points at halftime, and has scored only 14 first-half points in four league road games. Iowa trailed at halftime in all of them, by an average of 14 points, and has yet to win on the road.

Whatever is wrong with Jok’s back, it's something that needs to change in order for the Hawkeyes to find success away from Carver-Hawkeye Arena.

Other takeaways from Wednesday’s loss:

Iowa forward Tyler Cook (5) chases a loose ball with forwards Dom Uhl (25) and Cordell Pemsl at Illinois on Wednesday. It was a tough evening for Cook, who scored only five points with four turnovers and sat and watched most of the second half of the Hawkeyes' 76-64 loss. (Photo: Heather Coit, AP)

With his team trailing 40-24, McCaffery changed 80 percent of his lineup to start the second half. Out were the four freshmen who have been starting for weeks – Jordan Bohannon, Tyler Cook, Isaiah Moss and Cordell Pemsl.

Replacing them were sophomores Nicholas Baer, Ahmad Wagner and Christian Williams, plus freshman Ryan Kriener. It wasn’t nearly enough to mount a comeback, but the results were much better. The Hawkeyes looked more like themselves on offense, putting up 40 points while committing only three turnovers after intermission.

And it was the best defensive performance by far during the Hawkeyes’ three-game losing streak. In the previous five halves, opponents had shot at least 54 percent from the field; in the second half Wednesday, Illinois went just 10-of-29 (34.5 percent).

Cook, Moss and Pemsl barely played after halftime. McCaffery said that was an indication of how well he felt the second unit was playing and was not intended to send a message. But coaches always send messages through the allocation of playing time, and Cook said he understood.

The sophomore forward was part of a belated resurgence against Illinois

“I obviously knew why,” Cook said of his extended time on the bench. “I wasn’t playing my best (Wednesday) personally. And other guys were getting it done, so I can’t be mad at anybody else but myself. So I think all the starters can say the same thing.”

It was reminiscent of what McCaffery did early in the second half at Northwestern, where he pulled all five starters after a quick timeout.

Cook finished with five points and four turnovers in 17 minutes. He, too, had been dealing with tightness in his back in recent days, but said it was fine Wednesday and didn’t affect his play.

“Just a little bit of bad luck,” Cook said of his turnovers. “I was making aggressive plays, felt like I had some opportunities, and I just lost the ball a couple of times.”

The numbers may have gotten better in the second half for Iowa, but McCaffery still was not pleased with one aspect of his defense.

“Our ball screen defense still was not what it needs to be. That’s collective across the board,” McCaffery said. “So we’ve got to do a better job as coaches getting our guys to where we can handle that. And that’s five people. That’s not just the people involved in the ball screen.” 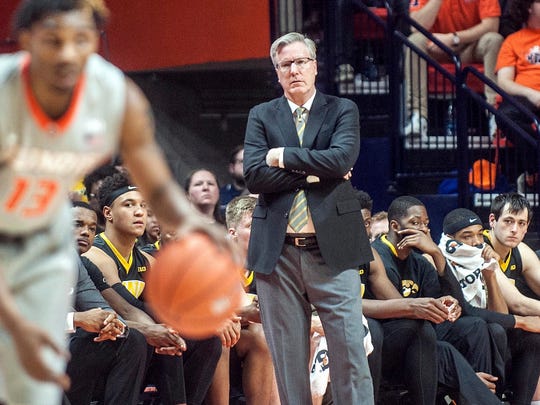 McCaffery made his most expansive comments to date about a major change being needed before Iowa hosts Ohio State on Saturday. The seventh-year Iowa coach even said that starts with his own performance.

Iowa fell behind 10-0 against Illinois, continuing a trend of slow starts, particularly on the road.

“What we have to do is take a step back and evaluate a lot of things, certainly starting with right here (indicating himself). Did we not do a good enough job getting these guys ready? We have to do a better job. We didn’t come out ready. It’s not their fault. It’s my fault,” McCaffery said.

“We’ve got to evaluate that and how we put our scouting together and game plans. How can we effectively execute our game plan better than we did in the last three games at the start? Is it a change in the lineup? Is that in order? It could be, but I don’t want to say that right now.”

Jok echoed his coach’s comments, a sign they’re on the same page in that regard at least.

“We’ve all got to look at ourselves in the mirror individually, starting with me and Baer as leaders,” Jok said.

“We’ve got to figure something out. We’ve got 10 games left. The season’s not over yet.”