The ever-calm sophomore guard hopes to continue the best stretch of his career Wednesday at Minnesota. 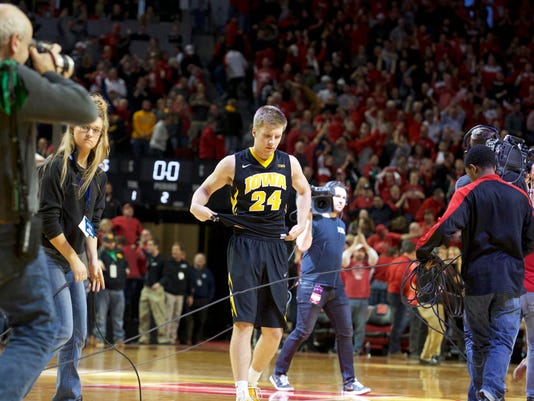 Brady Ellingson has scored 34 points with 13 assists and no turnovers during a three-game Iowa winning streak and emerged as a solid option during Peter Jok's absence and recovery from a back issue.(Photo: Bruce Thorson/USA TODAY Sports)

MINNEAPOLIS — There’s no such thing as good timing for a heart attack, but Andy Cerroni found some joy during his recuperation last week.

It gave Cerroni time to watch his former star basketball player at Hamilton High School in Sussex, Wis., have the best stretch of his career as an Iowa Hawkeye.

“It’s been a great remedy for me,” Cerroni said Monday after seeing Brady Ellingson score 34 points with 13 assists and no turnovers during a three-game Iowa winning streak.

Cerroni is back at work now — as a schoolteacher and coach. He’ll be watching again at 8 p.m. Wednesday (on BTN) when Ellingson and the Hawkeyes (14-10, 6-5 Big Ten Conference) go to Minnesota to try for four in a row.

“We’re his No. 1 fans. He’s the pride and joy of our community,” Cerroni said. “I just feel he’s got some attributes that are going to be really helpful for these guys down the stretch.”

Ellingson’s emergence has been the most surprising storyline in Iowa’s winning streak. The Hawkeyes played the first two games without senior guard Peter Jok, and Ellingson, a quietly efficient redshirt sophomore, responded.

Ellingson had been scoreless in four of his previous six outings, seemingly on the way to becoming an afterthought on a deep Iowa roster. Against Ohio State, he put up 17 points in a season-high 25 minutes. He followed with a career-high five assists as the Hawkeyes got their first road win of the season at Rutgers. And he matched that total in Sunday’s home victory over Nebraska, along with 11 points, even though Jok was back in the lineup.

Ellingson has played 74 minutes in the past three games and established himself as one of Iowa’s most important players in the process. He has showed off the long-range shooting that he was known for coming out of high school — making 10 of 14 3-pointers — but has also proved to be an amazingly calm ball-handler and passer.

Iowa coach Fran McCaffery even praised Ellingson, who stands 6-foot-4, 193 pounds, as being an underrated defender.

“I know every time I walk down by their bench, they’re always yelling ‘shooter’ and whatnot," Ellingson said of the attention he’s starting to get from opposing teams. "That’s to be expected, and you’ve just got to stay patient and hunt for my shot.”

As for playing the point at times for Iowa, something he never did in high school, Ellingson said: “I always like that. Just a different position, kind of gets me out of my comfort zone and makes me better.”

That’s about as much as reporters ever get out of Ellingson, who keeps his answers short and to the point in interviews.

It’s exactly what Cerroni saw from Ellingson in his four years at Hamilton. He left as the suburban Milwaukee school’s all-time leading scorer with 1,763 points. Being the focal point of opposing defenses never fazed Ellingson, Cerroni said.

“They would just throw kids at him and hold him or whatever. I never once saw him get frustrated or get angry. He’s just calm," Cerroni said.

“He’s got some smoothness to his game and he just sees the whole court. It’s not like he’s a jitterbug out there. He moves with a purpose and plays with a purpose.”

It wasn’t until the summer after his junior season that Division I recruiters started coveting Ellingson. He had led Hamilton to its first league title since 1979 and was named his conference’s player of the year. He followed with a terrific AAU campaign, and the college offers started to pour in — about 25 in all. It came down to Iowa, Oakland (Mich.) and San Diego, but Ellingson wanted to stay close to home and play in the Big Ten.

So the Hawkeyes it was.

Ellingson’s first season in Iowa City ended after seven games with a foot injury. He qualified for a medical redshirt and played sparingly last season, scoring 75 points but shooting only 27.3 percent from the 3-point arc.

This season has been a study in patience for Ellingson. He scored a career-high 23 points in the second game, a victory over Savannah State. But he played fewer than 10 minutes in five subsequent games, never quite repeating that success. He was averaging 2.8 points in Big Ten play before seizing his opportunity when Jok went out with a sore back.

“He's smart. He's tough. He's cerebral. He can play any one of three spots. He knows exactly where to go, where to line up every time,” McCaffery said of Ellingson after Sunday’s win over Nebraska.

That knowledge extends to the defensive end as well.

It’s why Ellingson figures to be a big part of Iowa’s effort when it attempts to get a second consecutive road victory at Minnesota (16-7, 4-6).

Cerroni will be watching closely. He and Ellingson share text messages often, and Cerroni loves to tell about the one he received after the Hawkeyes fell 93-90 in double overtime at Nebraska last month. Ellingson didn’t flinch when given the chance to launch a 3-pointer that would have forced a third overtime as the buzzer sounded.

“He said, ‘Coach, it felt good coming off my hand, and I’m going to make it next time',” Cerroni said.

“I don’t think I’ve ever seen him take a bad shot. He’s just got that charisma about him. People respect what he does. He just goes about it in a workman’s way. He’s not out there on Twitter, and he’s not out there selling himself.”