At the point, and in the paint, the young Hawkeyes grew up fast in Tuesday's overtime victory against Indiana 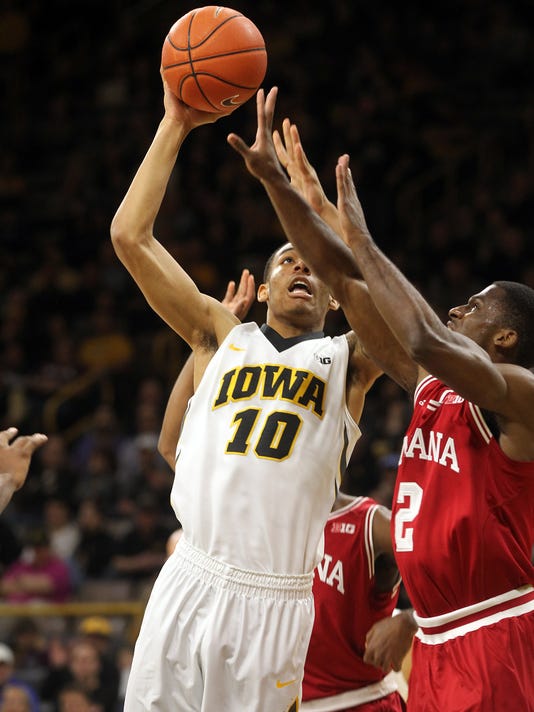 Iowa's Christian Williams drives for two of his career-high 10 points Tuesday against Indiana. The sophomore made all five of his two-point field-goal attempts.(Photo: David Scrivner/Iowa City Press-Citizen)Buy Photo

IOWA CITY, Ia. — It was not a play Christian Williams would have attempted three weeks ago.

Iowa’s sophomore point guard admitted that after helping his team overcome a disastrous start to rally past Indiana 96-90 in overtime Tuesday at Carver-Hawkeye Arena.

Late in regulation, with the Hawkeyes down 70-66, Williams lost control of the basketball on the far sideline, narrowly keeping it from bouncing out of bounds, before recovering and dribbling in from the wing. And he kept dribbling, past a Hoosier defender, just inside the paint, before launching a short jumper that hit the bottom of the net.

That sequence gave Williams his 10th and final point, establishing a career high. But it said so much more about where his confidence level is at right now.

“I was thinking I saw somebody at the wing, at the 3, but then I got too deep and I knew that I just had to do it,” Williams said of his jumpshot.

“I probably would have backed it out and probably passed it away (three weeks ago). But it’s nice to have some progression.”

Peter Jok carried the Hawkeyes to the finish line, no doubt. He scored 15 of his 35 points in the overtime and established a program record with 22 made free throws.

But Williams’ “progression” was the hidden gem in a bizarre back-and-forth game that saw Iowa snap a three-game losing streak.

He entered early after the starters fell into a 9-0 hole and was a catalyst for the comeback. He started by driving for a layup that gave Iowa its second basket then using his long arms to pilfer a pass and sprint for a dunk that kept the Hawkeyes within 22-12 with 11 minutes, 39 seconds left in the half. Williams played 21 minutes, made all five of his shots inside the 3-point arc and started the second half while Jordan Bohannon sat.

“Probably just focusing, not really being worried about shot-blockers,” Williams said of his ability to convert at the rim. “After I saw the first two go in, just kind of got on a roll a little bit.”

Meanwhile, Bohannon got his first extended stay in Iowa coach Fran McCaffery’s doghouse. The freshman was slow to contest shots by Indiana’s Josh Newkirk early and headed to the bench along with the other starters 2:10 into the game. Bohannon sat longer than the rest, though. He was scoreless in eight first-half minutes, and was informed at halftime that he would not be among the starters when the second half tipped off.

“I was just waiting for my time. I know how coach can be sometimes. He was just trying to make a statement to the starters. So I just tried to keep my head up and cheer on the guys who were in the game,” Bohannon said.

Iowa point guard talks about overtime win over Indiana, and how about Jok's free throws?

“I didn’t start the game as I wanted to. And everyone saw that tonight.”

What went through Bohannon’s mind as he watched the Hawkeyes claw back into the game without him?

Adjustment at the point

Bohannon’s ordeal had a happy conclusion when McCaffery played him alongside Williams down the stretch. Those two have rarely seen the court together.

Bohannon hit a 3-pointer to tie the score 55-55 with 6:47 left in regulation. It was the only 3 the Hawkeyes made after halftime. He added six free throws to finish with nine points and six assists in 27 minutes.

That made Bohannon just the fourth freshman in Big Ten Conference history to record at least 100 assists and 60 3-pointers in a season ( (Daniel Horton, Melo Trimble and D’Angelo Russell were the others).

And, after his early lethargy on defense allowed Newkirk to score seven of Indiana’s first nine points, Bohannon started to get more active on that end of the court, recording three of his four steals in the second half. 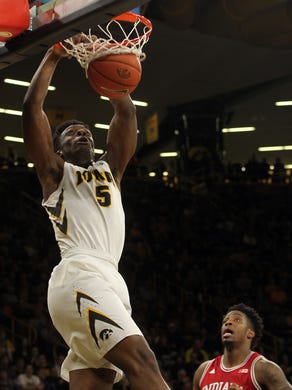 Iowa's Christian Williams goes up for a shot during the Hawkeyes' game against Indiana at Carver-Hawkeyes Arena on Tuesday, Feb. 21, 2017. David Scrivner/Iowa City Press-Citizen
Fullscreen 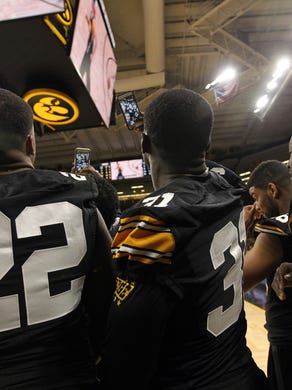 Members of the Iowa dance and football teams prepare for a halftime performance during the Hawkeyes' game against Indiana at Carver-Hawkeyes Arena on Tuesday, Feb. 21, 2017. David Scrivner/Iowa City Press-Citizen
Fullscreen

McCaffery’s goal in playing Bohannon and Williams together: “Take some of the ball-handling pressures off of Jordan, and it also sets him up to be a little bit of a scorer.

"I just felt Christian's energy level and his defense were spectacular. From the opening tip, he was great in both halves.”

Bohannon was happy to have the help running the point.

“Once we got in the game together, we knew we were going to make a run,” he said. “We’re both point guards. We know how the game runs. We know how everyone needs to be in the right spots.”

Adjustment in the paint

Iowa’s young post players needed time to take the measure of Indiana center Thomas Bryant. The 6-foot-10 sophomore blocked four shots and helped limit the Hawkeyes to 10 points in the paint in the first half.

Iowa freshman Tyler Cook had the biggest learning curve, but he made it a quick one. Cook missed his first six field-goal attempts, trying to back Bryant down only to come up short on his shots.

Things changed with 2:46 left in regulation when Williams and Cook headed up-court for a fast break with Newkirk waiting to break it up. Williams fed Cook a perfect lob pass for a dunk that tied the score 70-70 and brought a roar from both Cook and the crowd.

“As soon as he took off with the ball by the other team’s 3-point line, we knew what was going to happen. Their big guys got tangled up behind us. I saw that I had two or three small guys back, and we pushed it down the floor,” Cook said.

“I knew that Tyler was going to be ready for it,” Williams said. “I actually thought (Newkirk) was going to steal it a little bit. But I just tried to throw it as high as possible.”

Thirty seconds later, Cook was amped for another go at Bryant, this time dunking off a Nicholas Baer feed while the Hoosier big man could only foul him on the way up. Cook’s three-point play gave Iowa a 73-71 lead. He added a third dunk in the overtime, and made 8 of 11 free throws, to finish with 14 points.

Meanwhile, Cordell Pemsl battled back from early foul trouble to add nine points for Iowa. Fellow freshman Ryan Kriener played 18 minutes and scored four points with three big blocked shots of his own, two of them in overtime. Pemsl and Kriener made all five of their field goals. The Hawkeyes finished with 34 points in the paint.

“He's a competitor. He won't back down, and he was physical,” McCaffery said of Kriener. “The only mistakes he makes is setting an illegal screen and trying to get his teammates open. So I'm not going to be upset with him about that.”