NORTH LIBERTY, Ia. — Luka Garza graduated from the Maret School in Washington D.C. June 12 at 10 a.m. That same day, he flew out to his new home in Iowa City, arriving at about midnight before getting settled in his dorm.

A few hours later, he woke up the morning of June 13 for his first summer school class. And on June 18, he made his public Hawkeye debut with a 41 points and 10 rebounds in the Prime Time League's opening day.

"It’s an awesome experience," he said, "and I’m soaking up as much as I can.

"The mindset of this team is unlike anything I've ever been around."

Garza shared the PTL’s main stage Sunday with fellow incoming freshman Jack Nunge, who put up 35 points and 13 rebounds in a 98-97 win over Garza’s team.

Nunge, a more nimble, 6-foot-9 big, immediately flashed the range that earned him an Iowa offer, looking particularly strong at running the floor and handling the ball. He didn’t hesitate to shoot from long distance — going 2-for-6 from there — and he muscled his way to 13 buckets on 17 attempts inside the 3-point arc.

"I’ve been talking to Coach (Fran McCaffery)," Nunge said. "He doesn’t want me above 230 (pounds) because of my mobility. That’s one of my best features, he says, and he likes that about me." 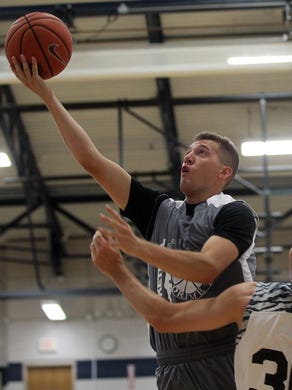 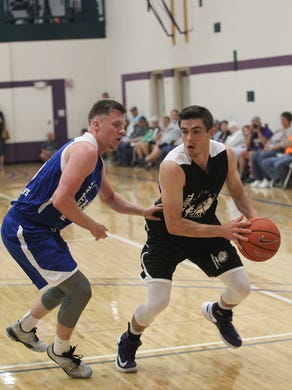 Garza made 16 of his 24 2-point attempts, mostly over-powering or out-maneuvering defenders in the paint. He said he’s already seen improvements in his game after just a week playing against guys like Tyler Cook, Ryan Kriener, Ahmad Wagner and Dom Uhl in practice.

"I can tell just by the way I approach every game," Garza said. "Those guys are so physical. None of our centers are alike. None of our big men are alike. We all have different styles. We all do different things in the post and that’s been great for me to go against.

"This summer I’m trying to improve every part of my game. I’ve got to get ready to play against Big Ten centers, Big Ten power forwards, so I’m just trying to work as hard as I can. Get in the gym whenever I can. Get in the weight room, get stronger at everything, really."

The big man had a solid performance in Day One of the Prime Time League.

Garza’s first basket came from long range: a sweet stroke from straightaway that hit nothing but net. He finished the game 2-for-2 from 3-point land. The 6-foot-11 big is most known for his fundamental paint play and footwork inside.

But he says there’s more to his repertoire.

"For sure. This year in high school, I think I shot 48 percent from 3," he said. "In AAU I didn’t shoot as much from 3 because I was the only big man, but I am a 3-point shooter. I’m confident in my 3-point shooting. I’ve been working on that my whole life. That’s just one of the facets of my game."

The two freshmen will have a rematch July 13 in the PTL’s final week of round-robin play in North Liberty.

Garza guarded Nunge whenever both players were on the floor. Nunge guarded several positions, but he was on Garza for the final stages of the fourth quarter. Clearly, defense wasn't the focus, though.

"Jack’s a great player," Garza said. "I’ve seen a lot of him over my high school career. He’s excellent. Coming out here, we’re going to push each other as hard as we can. It’s all fun, but once we get in here it’s competitive. He got the best of that tonight, but I look forward to when we play each other again."

Added Nunge: "It’s really fun. I’m rooming with him, I like him a lot. He’s a great player. He’s really strong, he’s physical. I’m really looking forward to these next four years for him."

Northern Iowa and University of Iowa basketball players are getting together to play in the Prime Time League. Here are some of the more intriguing players and matchups to watch for.

Before the freshmen stole the show, Isaiah Moss showed off his spring improvements in a 117-97 win over Cook and Uhl’s team.

The redshirt sophomore scored 32 points on 11-of-26 shooting and added four rebounds and four assists. He was aggressive from the tip. He loosed off shots from all over the floor — pull-up, catch-and-shoot, driving the lane — and most looked pretty dang good (albeit in a not-so-defensively-focused tournament).

Translation: He looked exactly like the type of player who will be asked to fill Peter Jok’s shoes this season.

"I worked on increasing my range, ball-handling. I was in the weight room all summer," Moss said. "I’ve been talking to the coaching staff and they’ve been telling me what I have to do. I have to step up, make plays for my teammates and be aggressive."

Perhaps the best stat for Moss: 7-for-13 from 3-point land. He was an average shooter from deep last year, knocking down 36 percent (29-for-81) of his attempts from beyond the arc. He shot 41.2 percent overall, averaging 6.5 points in 17.1 minutes per contest next year.

Expect those last two numbers to go up a good bit next winter.

"I would say my shot," Moss said when asked what he’s improved the most in the offseason. "Last year I was more of a mid-range shooter, I guess. So like I said, I worked in increasing my range.

Isaiah Moss discusses his improved 3-point shot at PTL, where he hit 7 of 13 from long range.

How'd everyone else do?

Jordan Bohannon scored 35, and Ryan Kriener scored 38 in their team's 128-100 win over Ahmad Wagner and Christian Williams' team. Wagner scored 22 and Williams had 9.

Matthew Bain covers preps, recruiting and the Hawkeyes for the Iowa City Press-Citizen, The Des Moines Register and HawkCentral. Contact him at mbain@gannett.com and follow him on Twitter at @MatthewBain_.